Overview of the GBP/USD pair. September 8. A member of the Bank of England, Michael Saunders, brought down the pound. 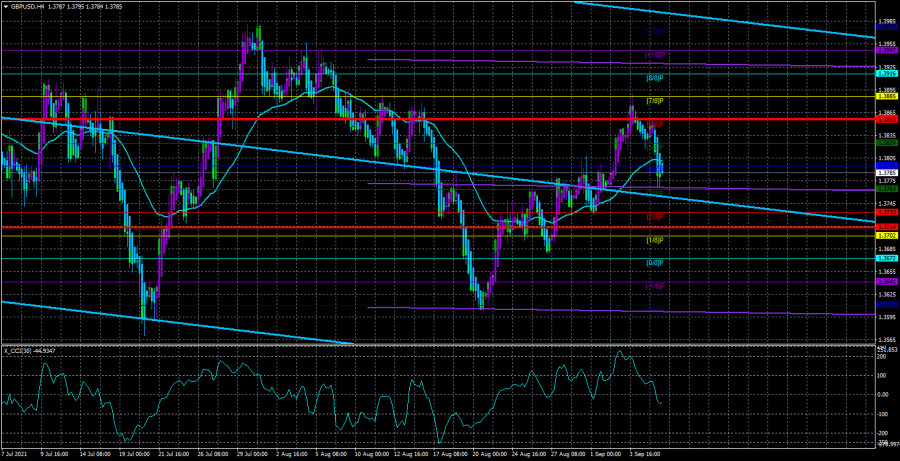 The British pound paired with the US dollar on Tuesday unexpectedly collapsed down. On the second trading day of the week, no important fundamental events were scheduled in the United States. Only speeches by two Bank of England's monetary committee (Michael Saunders and Catherine Mann) were scheduled in the UK. At the same time, the first performance was scheduled for earlier in the morning, and it was at this time, the pound began to fall in price. To be more precise, it was still a strong fall that began during the speech of Michael Saunders and not an earlier speech by Catherine Mann. Thus, it turns out that it was the speech of Saunders, who last month voted for the curtailment of the quantitative stimulus program, that brought down the pound. In principle, you don't need to be a genius to guess that Saunders' speech was "dovish."

After all, what can negatively affect the exchange rate of the British currency? Only words about postponing the completion of QE to a later time, about the weakness of the British economy, about the growth of "coronavirus" diseases, and something similar. However, in reality, everything turned out to be as simple as possible. Michael Saunders said that he fears for the continuation of the QE program and believes that it can lead to an increase in inflation in the medium term. Saunders noted that such a result may lead to the need for a stronger tightening of monetary policy in the future and may limit the monetary committee's ability to maneuver when determining and adjusting monetary policy. By and large, Michael Saunders did not say anything extraordinary. However, the markets saw in his speech a direct hint that the Bank of England is not going to tighten monetary policy in the near future. Of course, there is no question of any rate increase now. We are talking only about curtailing the economic stimulus program. According to the same Saunders, the British economy has approached its pre-pandemic level. However, the same Saunders made it clear that the Bank of England can continue to adhere to an ultra-soft monetary policy. And this will lead to an increase in inflation. The pound fell by about 100 points after that and settled below the moving average line. Thus, quite unexpectedly, the trend for the pound/dollar pair changed to a downward one. However, this situation can be considered force majeure.

From a technical point of view, in the coming days, the pair may try to return to the level of 1.3600, near which the bears have passed several times in recent weeks and months. We have repeatedly called this level the target for the next round of global correction against the upward trend. However, it should be understood that there are no good reasons for the markets to continue selling the pound for dollars. The US currency is still under pressure from several factors that are unlikely to rise by more than 600 points, within the 2800-point upward trend. In the UK now, problems are systematic, which can take at least several years to solve. These are not the factors that can put pressure on the pound in the short term.

It also became known yesterday that the grace period in trade between the UK and Northern Ireland has been extended. Earlier, the "Northern Ireland Protocol" was repeatedly the subject of disputes and threats between London and Brussels. London even made some decisions on the protocol unilaterally, which caused the anger of Brussels, which threatened to go to court to resolve this issue. And later, Boris Johnson and his government even said that the "Northern Ireland Protocol" had shown its low effectiveness and should be completely revised. The European Union immediately informed its British colleagues that this was impossible. The European Commission said that some protocol points could be revised, but not the entire protocol. Therefore, disagreements on this issue remain between the parties.

The markets, meanwhile, are waiting for the speech of Andrew Bailey, which is due to take place today. Recall that the head of the Bank of England has not spoken in public for several weeks, so the markets do not understand where the British regulator is looking at this time. Michael Saunders gave them some food for thought yesterday, but Andrew Bailey can also say something important. It is good that the speeches of high-ranking BA officials bring the pound to its senses. 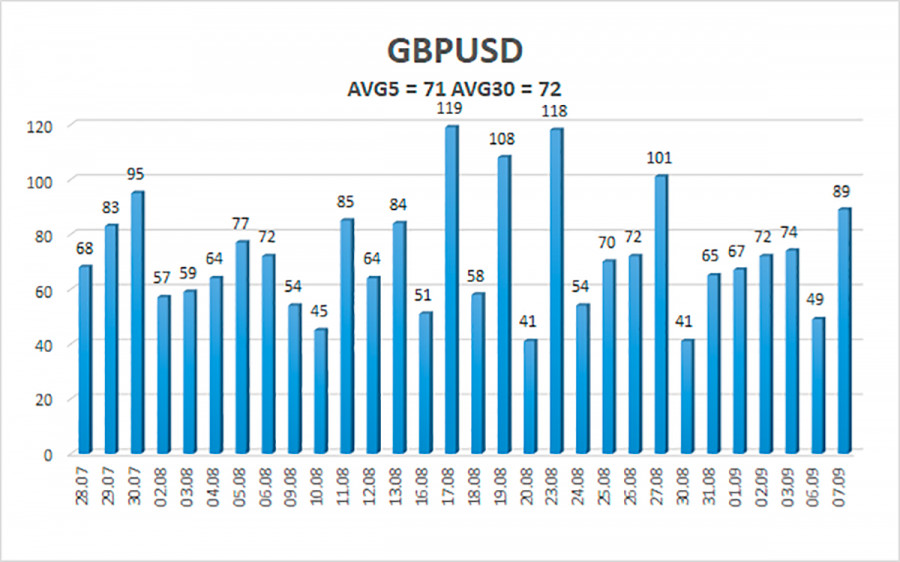 The average volatility of the GBP/USD pair is currently 71 points per day. For the pound/dollar pair, this value is "average." On Wednesday, September 8, we expect movement inside the channel, limited by the levels of 1.3714 and 1.3856. The upward reversal of the Heiken Ashi indicator signals the resumption of the upward movement.

The GBP/USD pair has been fixed below the moving average line on the 4-hour timeframe. Thus, today, it is necessary to trade down with the targets of 1.3733 and 1.3714 before the Heiken Ashi indicator turns up. Buy orders should be considered again if the price is fixed above the moving average line with targets of 1.3824 and 1.3856 and keep them open until the Heiken Ashi turns down.

Interesting? Write a comment below.
 brought down the pound., Michael Saunders, Overview of the GBP/USD pair. September 8. A member of the Bank of England
Forward 
Backward 