Solana gives way to XRP after collapse of its blockchain network; ADA and Alonzo add gains

In August and early February, two bright stars appeared in the cryptocurrency market. Those coins developed a stellar rally in a short period of time. Solana and Cardano broke into the top 10 coins by capitalization and more than once surprised traders with their sharp rises. However, literally within a few weeks, both projects suffered hefty losses, which negatively affected the quotes of cryptocurrencies. Due to the technical problems and the general decline of the crypto market, Solana and Cardano have lost their former luster.

Let's start with ADA/USD, which has fallen by 1.2% over the past day. It is trading within the descending channel. The total capitalization of the coin is $78.6 billion. ADA set the historical high of $3 but as of 17:00, it dropped to $2.45. The decrease in the Cardano project was associated primarily with rumors about the incompatibility of smart contract technology and the coin network. Therefore, the price edged lower by 20%, which was also facilitated by the weakness of the cryptocurrency market. As a result, ADA broke through important support levels, which now act as resistance. On September 15, the digital asset continues to consolidate at the same level. It lacks drivers for growth.

On the chart, a bullish formation was seen, which was broken through on September 14. ADA had once again entered the consolidation phase but the technical indicators continued to give bullish signals. The RSI indicator has crossed the 60 level. Stochastic and MACD continue their upward movements. The charts show the bullish trend but the daily trading volumes are at the level of $3 billion, which is not enough to break the $2.5 mark. At the same time, a similar dynamic persists on the 4H chart, which indicates a possible bullish breakout of the current oscillation channel. However, with an increase in trading volumes, a false break will trigger a retest of $2.4. 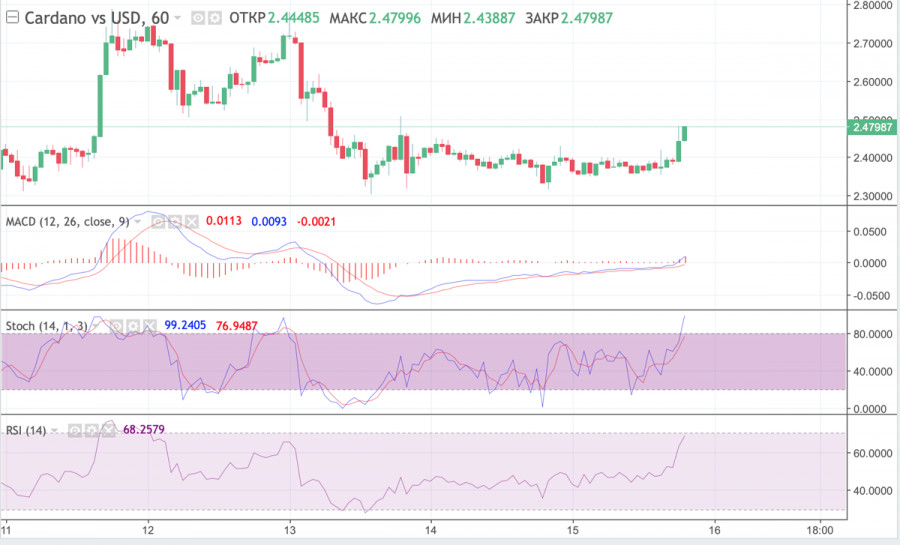 There is no clear picture of the current situation on the daily chart. The coin is in the consolidation phase. However, judging by the technical indicators, there is no chance of a successful bullish breakout right now. The virtual asset is unlikely to break through $2.5 in the near future due to weak on-chain activity and low demand. The charts also demonstrate that the stochastic and RSI indicators give weak signs of possible growth, but a powerful bullish divergence is forming on the MACD. It may push the coin to retest the support level of $2.4. Despite the current weak positions of the coin, the Alonzo hard fork was successful. ADA will soon begin to reach large capacities. This is hinted at by the increased attention of institutional investors, whose share in the asset continues to grow after the update. For example, the Swiss crypto-provider, Taurus, supported the Cardano blockchain. So, users will have the opportunity for staking. In addition, the current price of coin is extremely favorable for buying it. Besides, crypto analysts are sure the digital asset will rise in the near future. 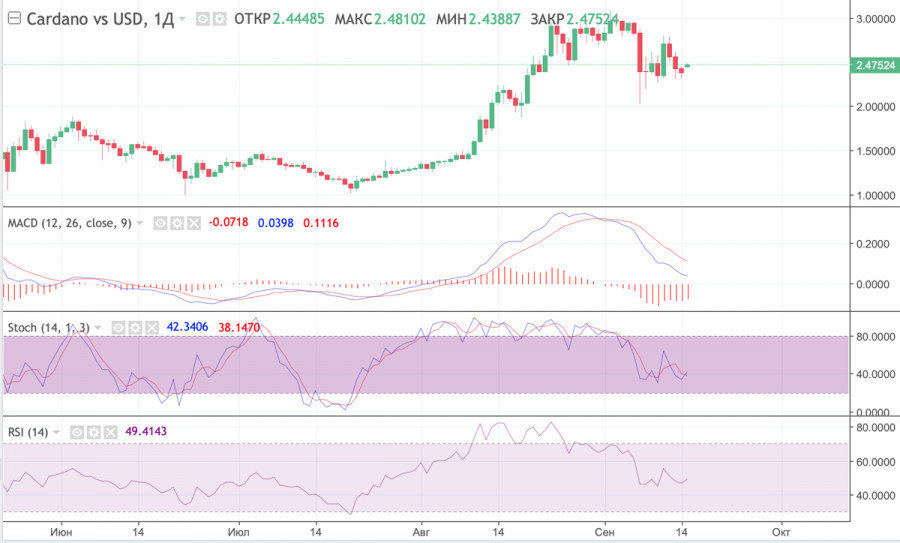 Recently, there has been more clarity about the technical failures in the Solana ecosystem. However, the situation is not as bad as it may seem at first glance. On September 14, a large-scale failure occurred in the Solana network so that new blocks had not been added for more than 15 hours. The developers said that this was due to unprecedented user activity and the system simply could not withstand the load. The price fell to $140 after the collapse of the network. Shortly after, it began to recover along with the system's capacity. The main negative consequence was a large loss of capitalization. As a result, XRP regained its sixth place in the top 10. Yet, for how long?

Over the past day, SOL/USD lost 3% and as of 17:00 is was trading at $156. On the 1H chart, the main indicators signal a consolidation phase with the possibility to break out of the narrow range. Stochastic is close to forming a bullish intersection and the RSI is moving along the 50 mark. At the same time, the MACD indicator signals a sideways movement with a possible bullish breakdown of the current level. On the daily chart, the situation is similar. So, bulls may push the price above $160 and to $160-$170. The failure in the Solana system occurred partly due to hype around the coin and its developed ecosystem. Many institutional funds are beginning to transfer money to the Solana ecosystem, ignoring the advantages of ETH and Cardano. This is why the coin is likely to regain ground. 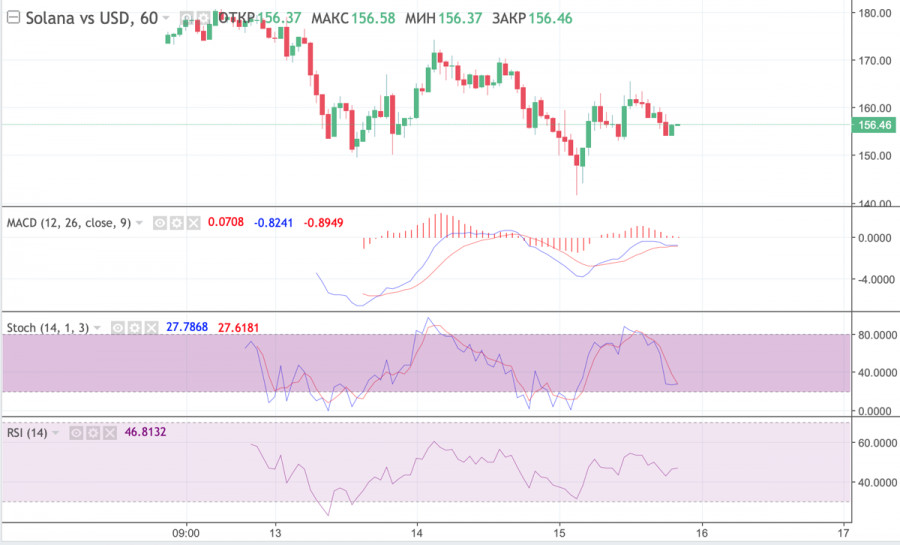