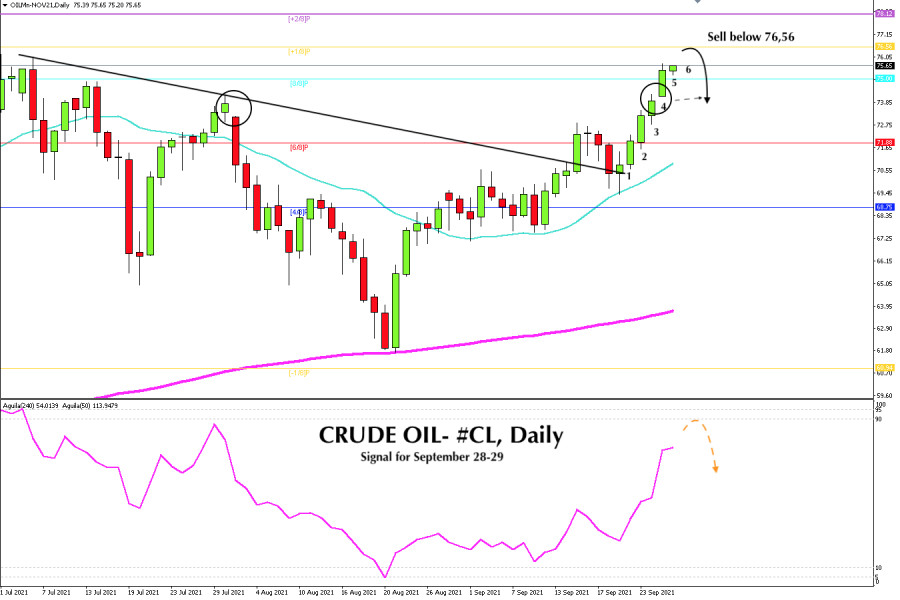 Since September 21 when it touched the 21 SMA, Crude oil #CL began a new bullish wave. Now it has been trading this way for 6 consecutive days and could reach the maximum of July 1. This is in part due to the interruptions in production of crude oil after Hurricane Ida in late August.

These interruptions could take months and have already caused sharp falls in US and world inventories which has given a strong bullish movement to crude oil, breaking the psychological level of 75.00.

At this moment, oil is trading at 75.65. It is expected that in the next few hours it will continue to rise to the strong resistance level of +1/8 of murray and it could be a good technical correction point, as the technical indicators are showing an overbought status.

If the bullish force prevails, a break above 76.56 could push the price to 78.12 which is +2/8 murray level of extreme overbought conditions.

As the main trend according to the daily chart is bullish, a technical bounce towards the support of 8/8 murray will be a good opportunity to buy with targets at 76.56 and up to 78.00 (+2/8).

The market was also supported by a return in appetite for risk assets, as concerns about a possible default by real estate developer China Evergrande have caused investors to buy crude from the psychological level of 70.00. Oil has been accumulating more than 500 pips.

The key is to wait for the crude to find strong resistance at 76.56 (+1/8). If the candles form a doji or a pinbar, it will be a signal to sell with targets at 75.00 and to cover the gap that was left on September 24 at 73.85. The eagle indicator on the daily chart is approaching the overbought level.