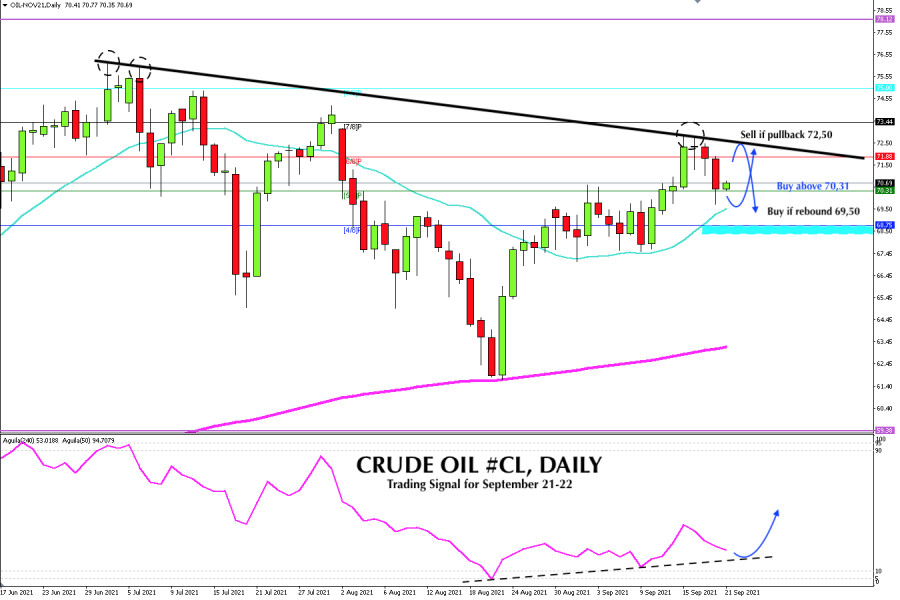 On the daily chart, Crude Oil, #CL, is trading above the SMA of 21 and below the downtrend channel. On June 1, it reached a one-year high of 76.20. From this point, the price made an initial correction, drawn with a bearish channel, which was tested again on September 15. Below this level, there is strong downward pressure.

On September 15, Crude Oil traded at its high point at 72.86. From this level, crude oil made a correction that extended to the zone of 69.70, around the psychological level of 70.00.

Risk aversion is taking over the market and investors prefer to turn to lower risk assets as a safe haven in the face of the uncertainty on the back of expectations of a cut in the Fed's bond-buying program.

The dollar has always been a safe haven asset in the face of uncertainty and risk aversion. Crude could give in to the bearish pressure only when it makes a daily close below the 21 SMA at 69.50 today. Then, it could drop from this point to the 4/8 murray support located at 68.75, and it will be the beginning of a bearish scenario in the short term.

The pivot level of 68.75 in 4-hour charts has become strong support for crude oil. At the same level there is the 200 EMA which also gives crude a bullish bias as long as it remains above the moving average. Therefore, any drop in crude oil towards these levels will be an opportunity to buy with targets at 70.31, 71.88 and up to 72.50 at the top of the bearish channel.

The key point in the next few hours is to trade following the uptrend. A good bounce is expected in the area of 69.50 and 70.31. Around these levels, it will be a good opportunity to buy.

The eagle indicator that measures the volume of the market is in the uptrend zone, which means that a good technical bounce in the support levels mentioned above will be a good opportunity to buy and go up until it can cover the GAP that the price left at 73, 80. We explained this in our analysis last week.