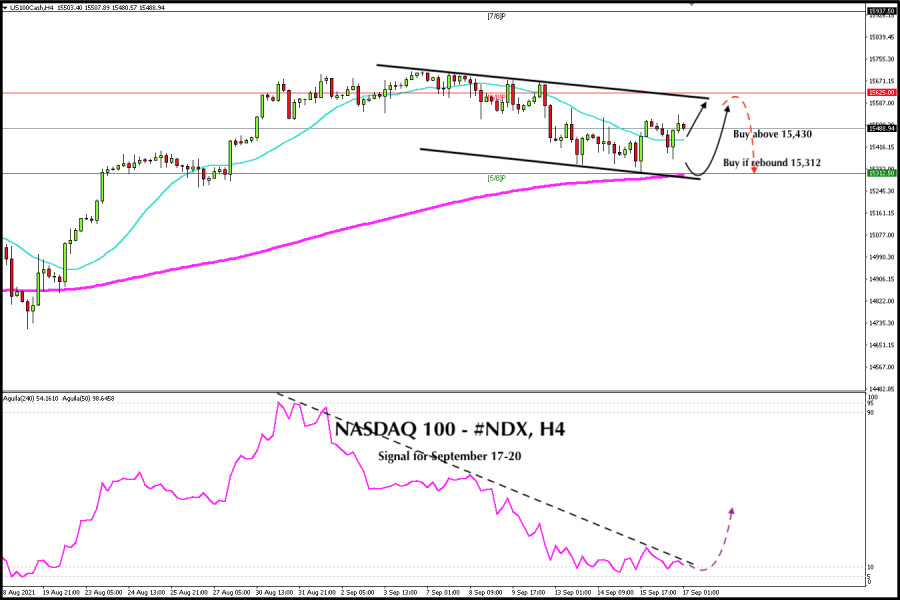 The Nasdaq 100 since September 10 had been falling in a sequence of lows below the 21 SMA until it found a strong technical bounce at the support of the 5/8 murray line and around the 200 EMA.

Today in the Asian session, the index is trading above the SMA of 21, with an upward bias, but with immediate resistance at the 6/8 murray line located at 15,625. The index is likely to continue its rise in the next few hours. A breakout and consolidation above 15,620 will indicate a resumption of the uptrend with targets at 15,937.

However, if it fails to break and consolidate above 15,625, there will be an opportunity to sell, since 15,625 is the top of the bearish channel and 6/8 of murray, becoming a barrier for the Nasdaq.

The overall trend is bullish according to the daily chart. However, the momentum tends to decline. So, if the Nasdaq falls below the SMA of 21, it could decline to 15,300 level of the EMA of 200 and the bottom line of the bearish channel.

A trade through 15,300 will indicate the presence of sellers and could be the start of a bearish scenario with targets at the psychological level of 15,000 (4/8).

The technical reading of the eagle indicator is showing a low trade volume and waning bullish force, indicating oversold market conditions. If the volume increases, a bullish movement can occur only if the price breaks the resistance of 15,625 or we could expect a sustained fall to the psychological level of 15,000.