Analysis of trades and tips on EUR trading

Monday was not the best day for trading EUR. The only signal was generated in the first half of the day when the price tested the 1.1713 mark. At that very moment, the MACD was well below zero, which, from my viewpoint, limited the pair's upside potential. For that reason, I lost the entry point that turned out to be very profitable. The price did not fall to 1.1684. So, there were no more entry signals. The eurozone's lending data was ignored by market participants. Thus, loans to households in the euro area rose by 4.2% y/y in August, while M3 money supply increased by 7.9% y/y. The results indicate that the economy was recovering during the summer period. Meanwhile, the monthly report of the Deutsche Bundesbank looked at inflation and its possible risks. This way, Germany's central bank hinted at the possibility of monetary policy tightening. ECB President Christine Lagarde also talked a lot about inflation in her speech. All in all, her speech did not have any effect on the market. Today, the eurozone's macroeconomic calendar is empty in the first half of the day. The focus will be on Lagarde's speech in the second half of the day. Fed Chair Jerome Powell will give testimony today, as well as Treasury Secretary Janet Yellen. As for key macroeconomic reports, US consumer confidence is estimated to increase, boosting the greenback. 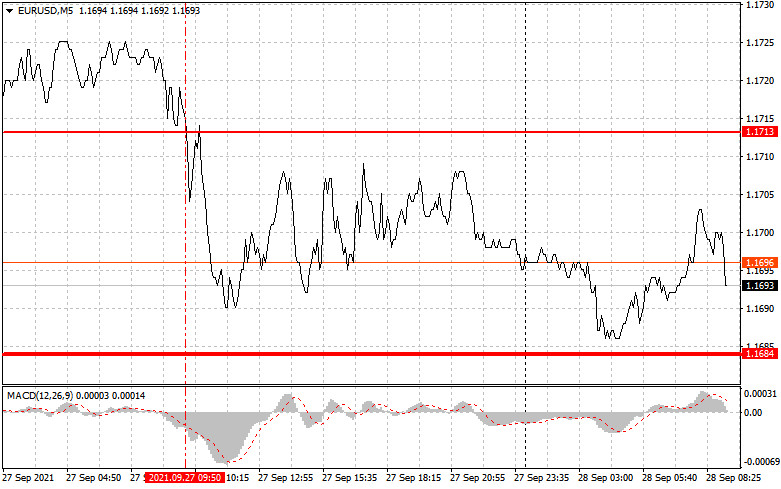 You should consider buying the euro when the price approaches 1.1709 (the green line of the chart) with the target at 1.1753. At this level, it would be wise to lock in profit and sell the euro, allowing a 10-15 pips correction. The euro is likely to recover sufficiently if the ECB's president hints at the possibility of monetary policy tightening. It is important to make sure that the MACD is above zero and start rising from this line before buying the pair. You should also consider opening long positions if the quote reaches 1.1683 and the MACD is in the oversold zone at that moment. This should limit the pair's downside potential and lead to a reversal in the market. I expect the price to rise to 1.1709 and 1.1753.

You should consider selling the pair after the price reaches 1.1683 (the red line of the chart). The target is seen at 1.1652 where it would be wise to lock in profit and open long positions, allowing a 10-15 pips correction. The quote is expected to remain under pressure amid an increase in demand for the US dollar as inflation keeps rising due to high energy prices. If the ECB's president says that the regulator is not ready for tightening, the euro will come under pressure. It is important to make sure that the MACD is below zero and start going down from this line before selling the pair. You should also consider opening short positions if the quote reaches 1.1709 and the MACD is in the overbought zone at that moment. This should limit the pair's upside potential and lead to a reversal in the market. I expect the price to fall to 1.1683 and 1.1652. 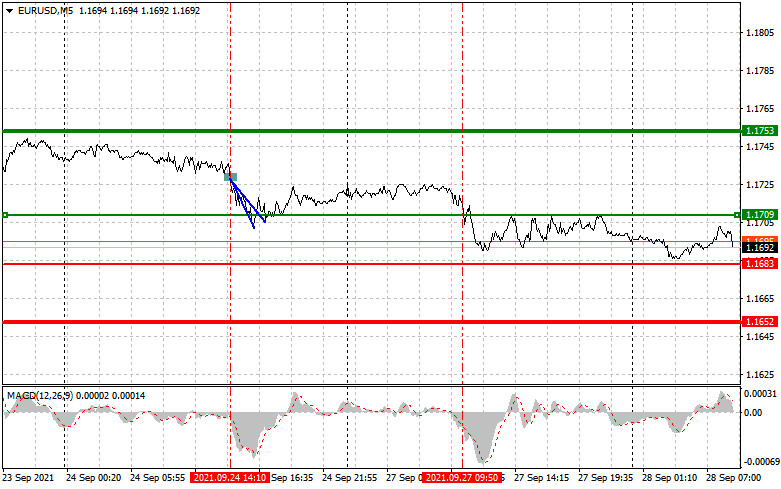 The thick green line is the estimated price where you should place a take-profit order or lock in profit since the quote is unlikely to grow above this level.

The thick red line is the estimated price where you should place a take-profit order or lock in profit since the quote is unlikely to fall below this level.

MACD. When entering the market, it is important to be guided by the overbought and oversold zones.

Remember that novice forex traders should be very careful when making decisions about entering the market. Before the release of important fundamental reports, it is best to stay out of the market in order to avoid sharp fluctuations in the rate. If you decide to trade during the news release, make sure to always place a stop-loss order to minimize losses. Without it, you may quickly lose your entire deposit, especially if you do not use money management, but trade large volumes.

Remember that in order to succeed in the market, you should have a clear trading plan, like the one I presented above. Spontaneous decisions based on the current market situation are a bad strategy for an intraday trader.