The collapse of the British pound yesterday came due to the inability of the UK authorities to quickly tackle the fuel crisis the country was hit by on the weekend. If you look at the chart, you may notice the only test at the level of 1.3682. It occurred at the moment the MACD was far away from zero, which made it impossible to enter the market. Market participants did not expect such a sharp drop in the pound. That is why it was a dubious decision to sell the pair at 1.3682. There were no more entry points yesterday. The speech made by Catherine L Mann, the BoE's MPC member, had no impact on the market. When the interview started, the pond was tumbling, and it was unclear how long it is going to last. In the first half of the day, a row of reports is scheduled for release in the United Kingdom, including lending data and M4 money supply. BoE Governor Andrew Bailey will make a speech today. In the second half of the day, the Fed's members will speak. Chair Jerome Powell will also make a few announcements. The only interesting macroeconomic report will be pending home sales in the US. However, this data is unlikely to somehow affect the market. 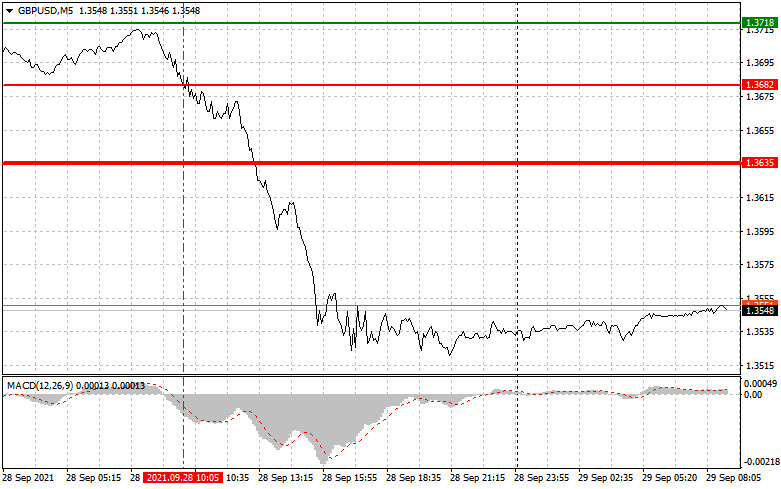 You should consider buying the pair when the price reaches 1.3564 (the green line of the chart) with the target at 1.3612 (the thick green line on the chart). It is wise to close positions around 1.3612 and sell the pair instead, allowing a 15-20 pips correction. The pound is highly unlikely to rise in the first half of the day after such a major drop yesterday. Make sure that the MACD is above zero and starts rising from this line before buying the pair. You should also consider opening long positions if the quote reaches 1.3536 and the MACD is in the oversold zone at that moment. This should limit the pair's downside potential and lead to a reversal in the market. I expect the quote to rise to 1.3564 and 1.3612.

You should consider opening short positions if only the pair reaches 1.3536 (the red line on the chart), which may lead to a steep fall in price. The key target is seen at 1.3487, where you should close your short positions and open long ones instead, allowing a 15-20 correction. The pair is expected to remain under pressure. Only Governor Bailey's speech may somehow affect the bearish market. Make sure that the MACD is below zero and starts going down from this line before selling the pair. You should also consider selling the pair if the quote reaches 1.3564 and the MACD is in the overbought zone at that moment. This should limit the pair's upside potential and lead to a reversal in the market. I expect the price to fall to 1.3536 and 1.3487. 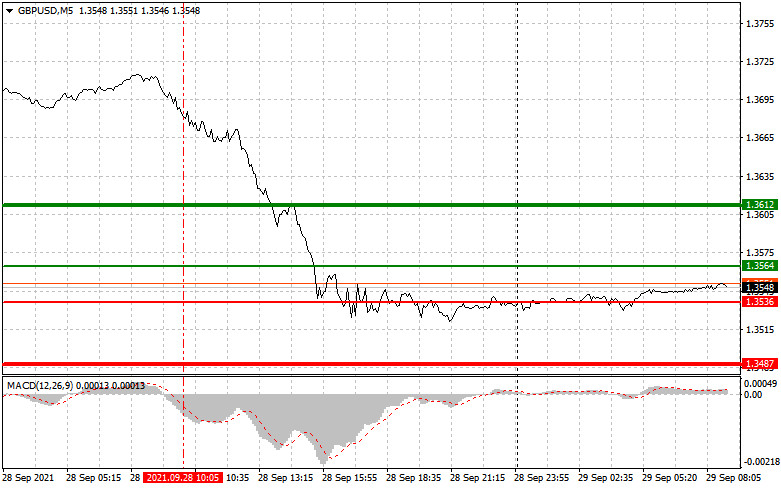 The thick green line is the estimated price where you should place a take-profit order or lock in profit since the quote is unlikely to grow above this level.

The thick red line is the estimated price where you should place a take-profit order or lock in profit since the quote is unlikely to fall below this level.

MACD. When entering the market, it is important to pay attention to the overbought and oversold zones.

Remember that novice forex traders should be very careful when deciding to enter the market. Before the release of important fundamental reports, you should stay out of the market in order to avoid sharp fluctuations in the rate. If you decide to trade during news releases, make sure to always place a stop-loss order to minimize losses. Without it, you may quickly lose your entire deposit, especially if you do not use money management but trade large volumes.

Remember that in order to succeed in the market, you should have a clear trading plan, like the one I presented above. Spontaneous decisions based on the current state of the market are a losing strategy for an intraday trader.