Analysis and trading recommendations for EUR/USD on October 21

There was a signal to sell in EUR/USD on Wednesday, but it had to be ignored because the MACD line was far away from zero. Then, before the day ended, another sell signal appeared, and this time it provoked a decline in the pair because traders were able to take short positions, thanks to the MACD line being at the overbought area. The movement, however, was not that large. 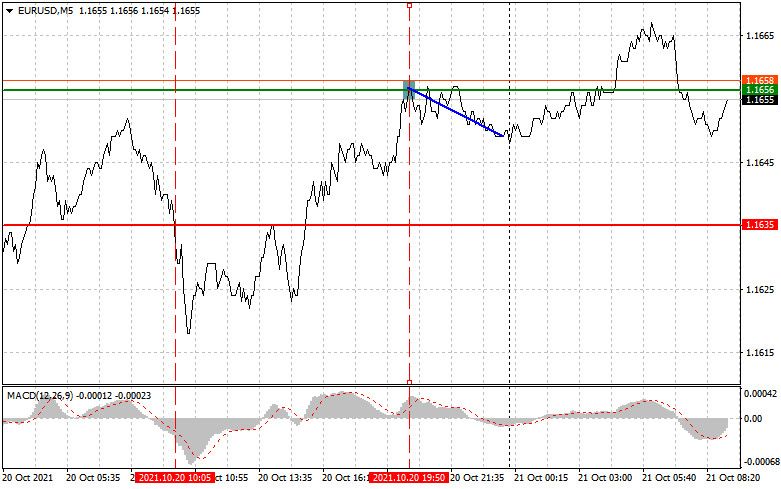 Data released yesterday were ignored by the market because the figures completely coincided with the forecasts of economists. But in the afternoon demand for risk assets surged, thanks to the statements from Fed representatives.

This morning the market may remain calm as there are no EU statistics scheduled to be published. But by afternoon volatility may soar amid reports on US manufacturing activity, leading indicators and jobless claims. There will also be a speech from FOMC member Christopher Waller, although it may not provoke much investor interest.

Open a long position when euro reaches 1.1662 (green line on the chart) and take profit at 1.1696. Price may increase as the lack of EU data could help buyers break through weekly highs.

Before buying, make sure that the MACD line is above zero, or is starting to rise from it. It is also possible to buy at 1.1646, but the MACD line should be in the oversold area, as only by that will the market reverse to 1.1662 and 1.1696.

Open a short position when euro reaches 1.1646 (red line on the chart) and take profit at 1.1618. Pressure may return if the attempt to break above the local high is unsuccessful and if there are strong macro statistics in the United States.

Before selling, make sure that the MACD line is below zero, or is starting to move down from it. Euro could also be sold at 1.1662, but the MACD line should be in the overbought area, as only by that will the market reverse to 1.1646 and 1.1618. 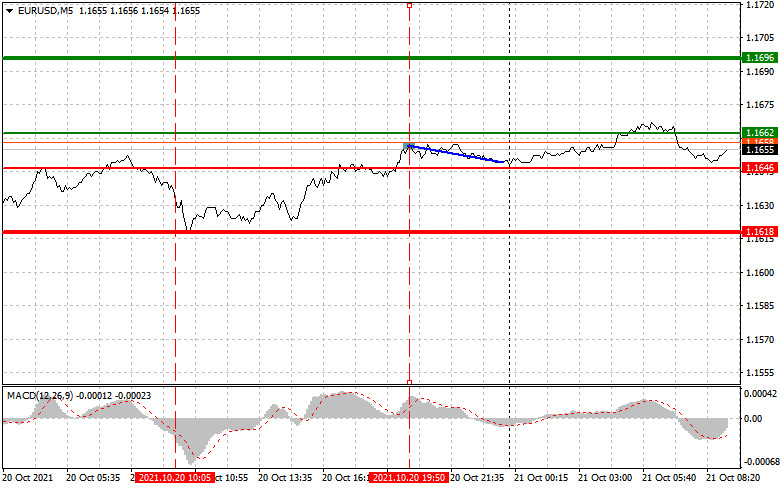 The thin green line is the key level at which you can place long positions in the EUR / USD pair.

The thin red line is the level at which you can place short positions in the EUR / USD pair.