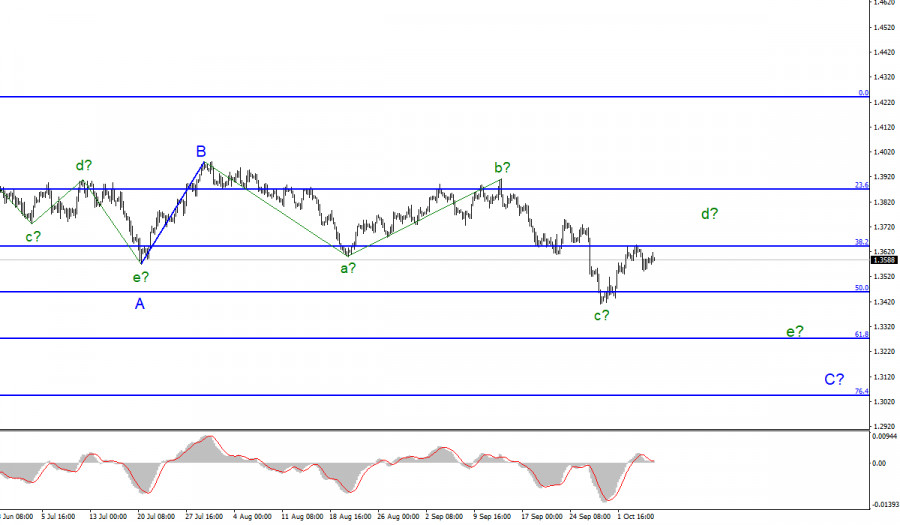 For the pound/dollar pair, the wave marking has become more complicated. Currently, the formation of a downward trend section is expected. The pair declined by 300 pips over the past week and also broke through the low of the previous waves a and e. Thus, some adjustments have been made to the wave pattern. Now, it has taken the form of a downward trend section. However, this downward section may be a correction. If we look at the internal structure of the proposed wave A, we see that it is not an impulsive wave. Wave c b in this section of the trend is also can hardly be called an impulsive one. At the moment, three waves are clearly visible in it. However, this is a big problem for correctional structures. Internal wave markings can be either three-wave or five-wave and take a very elongated form with complications. Thus, given the unsuccessful attempt to break through the 38.2% Fibonacci level, the construction of a new descending wave, possibly the fifth in the composition of c in C is likely to occur.

The UK is likely to abandon plans to attract overseas workers to tackle the labor shortage.

The pound/dollar increased by only 20 pips on Thursday. Trading volumes were rather low. The economic calendar is empty today. So, it is hard to say why investors remain reluctant to trade. Perhaps they are anticipating the main report of the week – Nonfarm payrolls data. The US Department of Labor is going to release this report on Friday. The UK is trying to mitigate the labor shortage as many migrant workers left the country after Brexit. Notably, overseas workers have been the driving force in many sectors of the economy over the past 25-30 years. The cheap labor force from less affluent EU countries allowed the British economy to plug holes in areas where local residents did not want to work due to low wages. However, after Brexit, the working conditions of migrants have changed, it has become more difficult to get to the UK. They have to deal with red-tape, checks, tests, and so on. Therefore, most of the migrants thought that it would be wise to choose other EU countries for work. Meanwhile, the UK is experiencing a shortage of drivers, seamstresses, waiters, movers, and other professions, which were occupied exclusively by overseas workers. Many experts note that now, the government will have to raise wages for these professions in order to find workers among local residents. Accordingly, this will cause an increase in inflation. This option is fully supported by Boris Johnson, who does not want to return to the old model of low wages, triggered by uncontrolled migration.

The wave pattern has changed dramatically. It is now showing a downtrend, but not an impulse one. Therefore, it is recommended to open short positions on the pair for each MACD signal based on the construction of wave C. It may turn out to be an elongated wave, with targets located near the level of 1.3273, which corresponds to 61.8% Fibonacci. An unsuccessful attempt to break through the 1.3643 level indicates that traders refrain from opening long positions on the pound sterling. Thus, a new downward wave can be built. 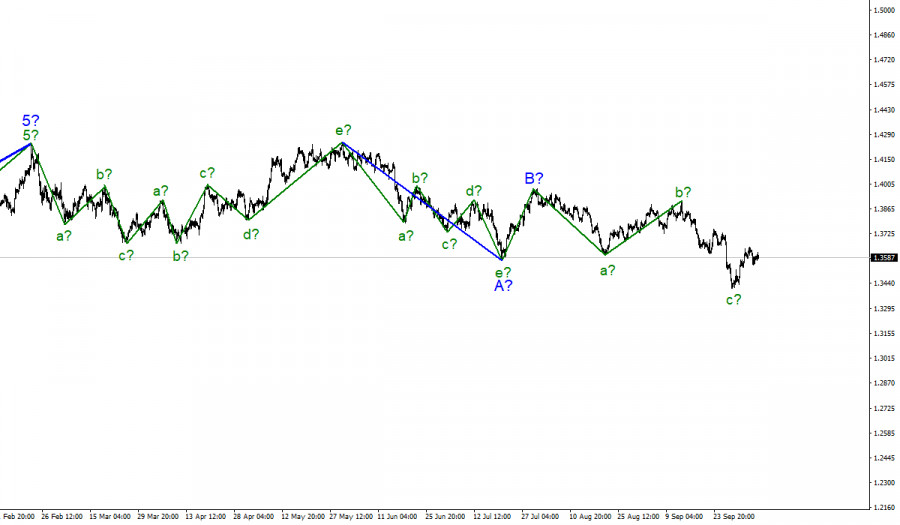