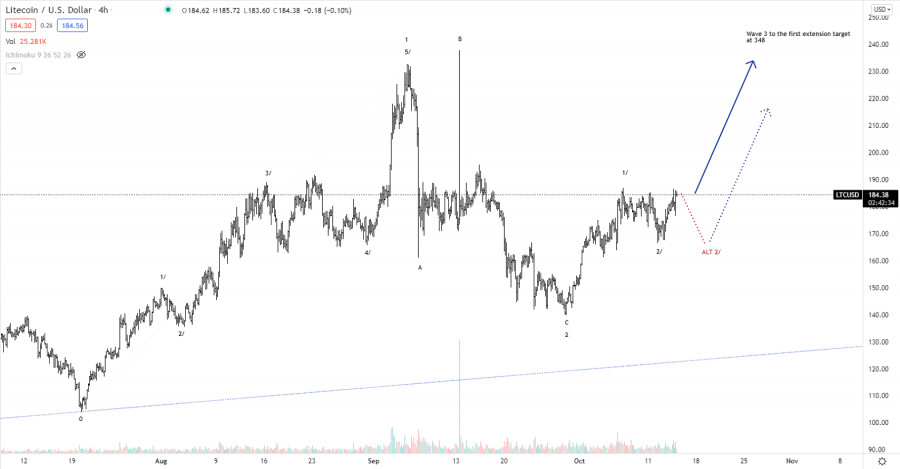 Today we are going to look at Litecoin and in the light of the Elliott Wave Principle. An impulsive wave should appear from a five-wave move. Three wave in the direction of the trend and two corrective waves in the opposite direction of the trend. In this case, we can see a distinct low at 103.88 in late July followed by a nice five wave move to the upside peaking at 232.64. This five-wave move was followed by a three-wave correction. However, looking at this three-wave move, we can see the wave B moved above the peak of wave 1 at 232.64 and the C-wave that followed the peak in wave B at 237.88 move below the termination point of wave A at 161.00, and wave C was completed at 139.77. This type of correction within the Elliott Wave Principle is called an expanded flat correction and that kind of correction tells us what to expect from the coming impulsive rally in wave 3.

An expanded correction as wave 2 tells us that an extended rally should be expected in wave 3 and that will give us a minimum target of 348.10, where wave 3 will be 1.618 times longer than wave 1. Now, we know what to look for all we have to do is wait as human psychology ultimately will bring us to the expected target. Not necessarily in a direct line, but third waves often are the strongest. Corrections on the way towards the target should be rather small and short in time duration.

That foresight is exactly the power that the Elliott Wave Principle is able to give us. The better we understand the waves the better we will be able to control our fillings as the waves unfold. That is of great importance as feelings can lead to losses in the financial markets.