EUR/USD: the plan for the American session on October 11 (analysis of morning deals). The euro is actively trading inside

To open long positions on EURUSD, you need:

Good data on the volume of industrial production in Italy helped the euro regain its position a little in the first half of the day. However, the active actions of sellers returned pressure to the market. In total, several input signals were generated. Let's deal with them: at the beginning of the European session, the bears formed a false breakdown at the level of 1.1583, which led to a signal to sell the euro and fall to the support area of 1.1558. Already closer to the middle of the day, the bulls actively defended themselves at this level, and a false breakdown led to the formation of a signal to buy the euro. At the time of writing the review, the pair has gone up more than 15 points. From a technical point of view, nothing has changed except for the nearest support level. The fact that many markets will be closed in the afternoon due to the celebration of Columbus Day in the United States, volatility promises to be extremely low. In this connection, we are unlikely to get out of the side channel we traded in the morning. I advise you to stick to the previous strategy. The primary task of buyers will be a breakthrough and consolidation above the 1.1583 range. Only its reverse test from top to bottom forms a signal to buy the euro in the expectation of further recovery of the pair to 1.1611. A more distant target will be the 1.1636 area, where I recommend fixing the profits. In the scenario of a decline in EUR/USD, the optimal scenario will be the next formation of a false breakdown in the support area of 1.1555 (revised from 1.1558), just above which the moving averages pass, as well as the lower boundary of the ascending correction channel. When trading is conducted above 1.1555, the buy signal formed during the European session, which I analyzed above, will be valid. If there is no bull activity at 1.1555 in the afternoon, I advise you to postpone long positions to the minimum of last week - 1.1530. It is possible to open long positions immediately for a rebound only in the support area of 1.1510 and 1.1482 and then, counting on an upward correction of 15-20 points within a day. 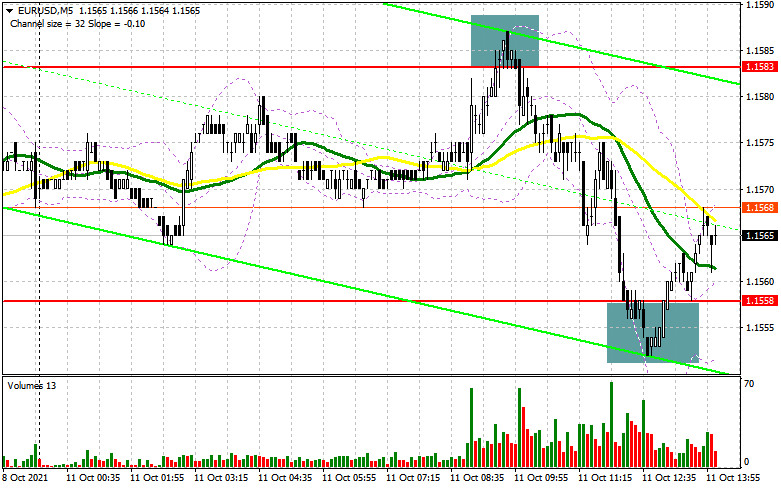 To open short positions on EURUSD, you need:

Market volatility will be quite low in the afternoon. However, euro sellers will expect the continuation of the bearish scenario today. Now, they need to try hard to break below the intermediate support of 1.1555. A breakthrough and a test of this level from the bottom up will lead to the formation of a signal to open short positions, which will quickly push EUR/USD to the minimum of last week in the area of 1.1530. A more distant goal will be the support of 1.1510, where I recommend fixing the profits. A very important task for the bears remains to protect the resistance of 1.1583, which they did well in the first half of the day. Only the next formation of a false breakdown there will return pressure on the pair, which will push it to the intermediate support of 1.1555, just above which the moving averages playing on the side of the bulls pass. In the scenario of the absence of sellers at the level of 1.1583, it is best to postpone sales until the test of a larger resistance of 1.1611 or open short positions immediately for a rebound based on a downward correction of 15-20 points from the new high of 1.1636. 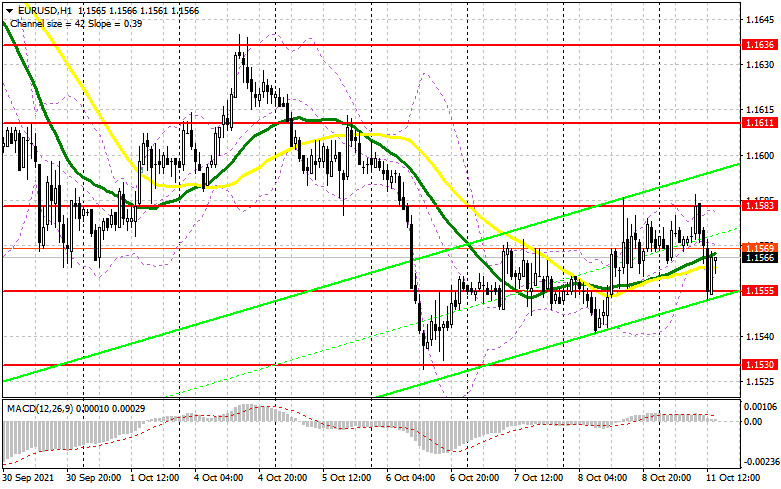 The COT report (Commitment of Traders) for September 28 recorded a sharp increase in short and long positions. However, the former turned out to be more, which led to a reduction in the net position. Now the United States of America is going through difficult political times has kept the demand for the US dollar all last week and put pressure on risky assets. The prospect of changes in the monetary policy of the Federal Reserve System allowed traders to build up long positions on the dollar without much difficulty, as many investors expect the central bank to begin reducing the bond purchase program closer to the end of this year. An important report on the number of people employed in the US non-agricultural sector will be released this week, which will shed light on the further actions of the central bank since a lot now depends on labor market indicators. Demand for risky assets will remain limited due to the high probability of another wave of coronavirus spread and its new Delta strain. Last week, the President of the European Central Bank said a lot that she would continue to adhere to a wait-and-see position and maintain a stimulating policy at current levels. However, the observed surge in inflationary pressure in the 4th quarter of this year may spoil the regulator's plans. The COT report indicates that long non-commercial positions increased from 189,406 to the level of 195,043, while short non-commercial positions jumped quite seriously - from the level of 177,311 to the level of 194,171. At the end of the week, the total non-commercial net position dropped from the level of 12,095 to the level of 872. The weekly closing price also fell to 1.1695 from 1.1726.

Trading is conducted above 30 and 50 daily moving averages, which indicates an attempt by the bulls to continue the correction.

Volatility is very low, which does not give signals to enter the market.

Interesting? Write a comment below.
 EUR/USD: the plan for the American session on October 11 (analysis of morning deals). The euro is actively trading inside
Forward 
Backward 