EUR/USD: plan for the European session on October 13. COT reports. Euro bulls protected the support of 1.1531 and are aiming

Yesterday was a fairly calm day for trading. Let's take a look at the 5 minute chart and break down the trades that were formed. Nothing interesting happened in the morning. Considering that the volatility was about 20 points, it was hardly possible to talk about any trade. The data released in the morning on business confidence from the ZEW Institute turned out to be much worse than economists' forecasts, which discouraged traders from counting on the euro's succeeding growth and provoked its fall in the afternoon. A breakthrough and consolidation below the support of 1.1544, as well as a reverse test of this level - all this resulted in forming signals to sell the euro, but I did not wait for a major downward movement. The fall was about 15 points. 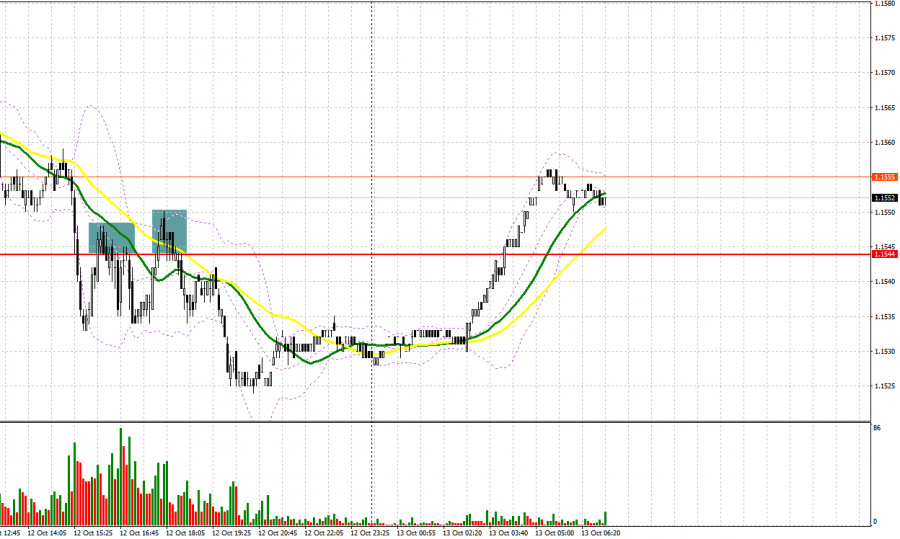 Today is a more interesting day, as in the first half of the day there will be data on inflation in Germany, which may provoke movement in the pair. Eurozone industrial production data for August will most likely be ignored, but poor performance will only worsen the position of buyers of risky assets. The bulls' primary concern will be to keep trading in the narrow horizontal channel that we have been in since October 6. Only this will allow them to maintain a bit of hope for an upward correction. A breakthrough and consolidation above the 1.1560 range and its reverse test from top to bottom forms a signal to buy the euro in hopes that the pair would recover to the upper border of the 1.1586 horizontal channel. Only a breakdown of this range with a similar test from top to bottom will allow the bulls to build a new upward trend with the prospect of EUR/USD strengthening to the 1.1611 area, where I recommend taking profits. The next target will be the 1.1636 high. In case EUR/USD falls after the publication of weak inflation data in Germany, it is best not to rush with long positions. The optimal scenario would be the formation of a false breakout in the area of the intermediate support at 1.1510. If the bulls are not active at this level, I advise you to postpone long positions to new lows around 1.1482 and 1.1454 - and even then, counting on an upward correction of 15-20 points within the day. 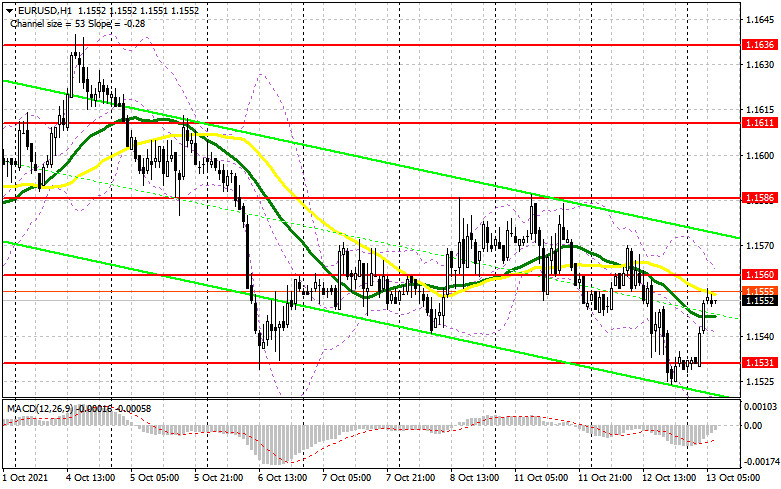 The bears keep the market under their control and most likely the whole reckoning will be on US inflation, which is expected in the afternoon. Strong data will help to continue the bearish trend for the pair. Euro bears will aim for the lower border of the horizontal channel at 1.1531 during the European session. A breakthrough and test of this level from the bottom up will lead to forming a signal to open short positions, which will quickly push EUR/USD to the next intermediate level of 1.1510. The next target will be a new low at 1.1454, where I recommend taking profits. A very important task for the bears is to protect the middle of the 1.1560 horizontal channel, which was formed at the end of yesterday. Only a false breakout there, along with weak data on inflation in Germany, will return pressure on the pair, which will push it to a low like 1.1531. In case the bears are not active at 1.1560, it is best to postpone selling to the upper boundary of the horizontal channel at 1.1586, or open short positions immediately on a rebound, counting on a downward correction of 15-20 points from the new high of 1.1611.

Trading is carried out in the area of 30 and 50 daily moving averages, which indicates market uncertainty with the pair's succeeding direction.

A breakthrough of the upper border of the indicator around 1.1560 will lead to growth for the pair. A breakout of the lower border in the area of 1.1520 will increase the pressure on the pair.

Interesting? Write a comment below.
 EUR/USD: plan for the European session on October 13. COT reports. Euro bulls protected the support of 1.1531 and are aiming
Forward 
Backward 