Several rather profitable signals for entering the market were formed yesterday. Let's take a look at the 5-minute chart and figure out all the entry points. In the first half of the day, the bears protected the resistance at 1.1560 and formed an entry point to short positions from there, which was realized immediately after the release of inflation data in the US. The downward movement was about 30 points. During the US session, the bulls managed to take control of 1.1560, and the reverse test of this level from top to bottom formed an excellent entry point into long positions. As a result, the upward movement was about 30 points. 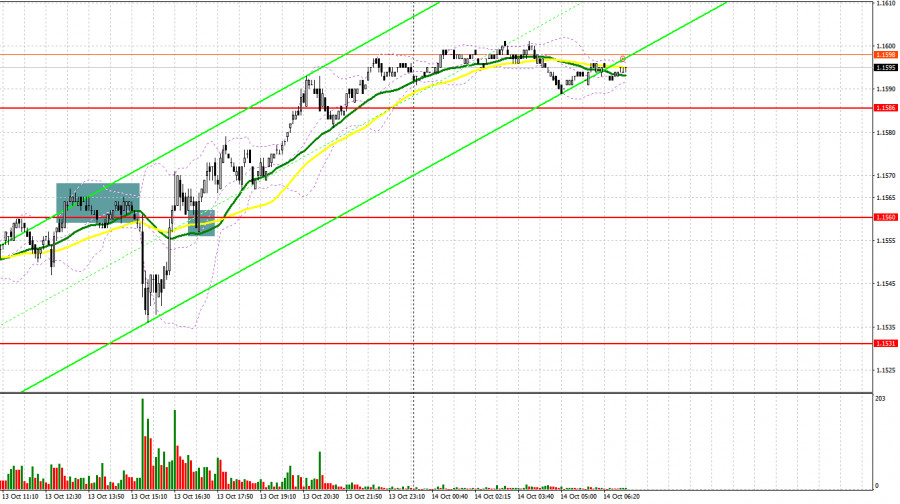 No important fundamental reports this morning, which will play into the hands of the euro bulls, as they managed to get out of the horizontal channel yesterday. The first challenge is to break through and consolidate above the 1.1611 range. Its downward reversal testifies to a buy signal for the euro, hoping that the pair would recover further to a high like 1.1636. A breakthrough of this range with a similar test from top to bottom will allow the bulls to build a new upward trend with the prospect of EUR/USD strengthening to the 1.1659 area, where I recommend taking profits. The next target will be the high of 1.1684. An equally important task for the bulls in case EUR/USD falls in the first half of the day is to protect the support of 1.1583. Moving averages are just below this level, playing on the bulls' side. Forming a false breakout there creates a good entry point into long positions. In case the bulls are not active, I advise you to postpone long positions to the area of 1.1559, where the lower border of the upward correctional channel formed on the evening of October 12 passes. I advise you to buy EUR/USD immediately on a rebound, counting on an upward correction of 15-20 points only from the lows of 1.1537 and 1.1482.

The bears missed the market as they allowed the pair to rise above the upper border of the horizontal channel. All they can count on today is resistance at 1.1611 to be protected. Due to the lack of important fundamental statistics in the first half of the day, it will be quite difficult to do this. Only a false breakout there will return the pressure to the pair, which will push it to the support of 1.1583, on which a lot depends today. A breakthrough and a test of this level from the bottom up will lead to forming a signal to open short positions, which will quickly push EUR/USD to the next level of 1.1559, slightly above which the moving averages are, playing on the side of the bulls. The next target will be the low of 1.1537, but its test will mean the resumption of the bearish market for the euro. In case the bears are not active at 1.1611, it is best to postpone selling until the resistance test at 1.1636, or open short positions immediately on a rebound, counting on a downward correction of 15-20 points from the new high of 1.1659. 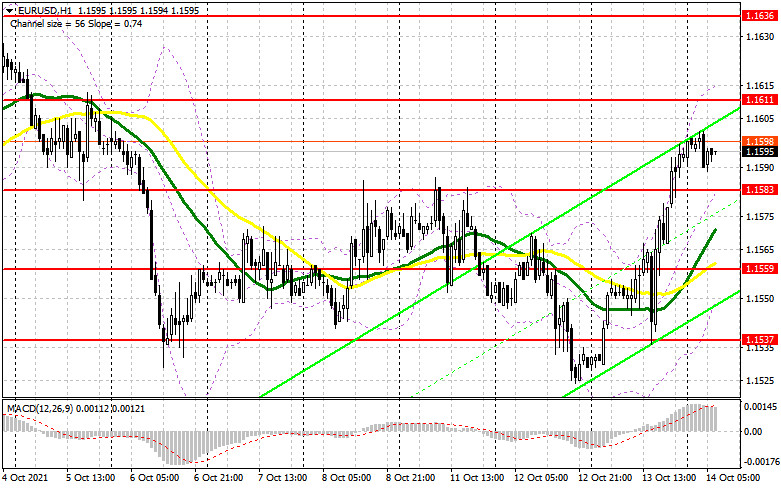 Trading is carried out above the 30 and 50 daily moving averages, which indicates the construction of a new uptrend for the euro.