EUR/USD: plan for the European session on October 21. COT reports. Euro bulls again rested on the resistance of 1.1668

Yesterday was quite an interesting day for trading. Let's take a look at the 5 minute chart and break down the entry points. In my morning forecast, I paid attention to the 1.1632 level and advised you to make decisions based on it. The euro's growth in the Asian session ended quickly and the pressure on the pair returned at the very beginning of the European session. The breakthrough and reverse test of the 1.1632 level formed an entry point for short positions, after which the pair fell to the 1.1620 area, where the pressure slowed down a lot. The expected rise in inflation in the euro area did not help bulls to continue their upward trend. In the second half of the day, I did not wait for a second test and a false breakout in the area of the new support at 1.1618 and was forced to miss the upward movement. The bears kept the level of 1.1645 as best they could, but despite all efforts and a signal to sell the euro, the downward movement did not take place. 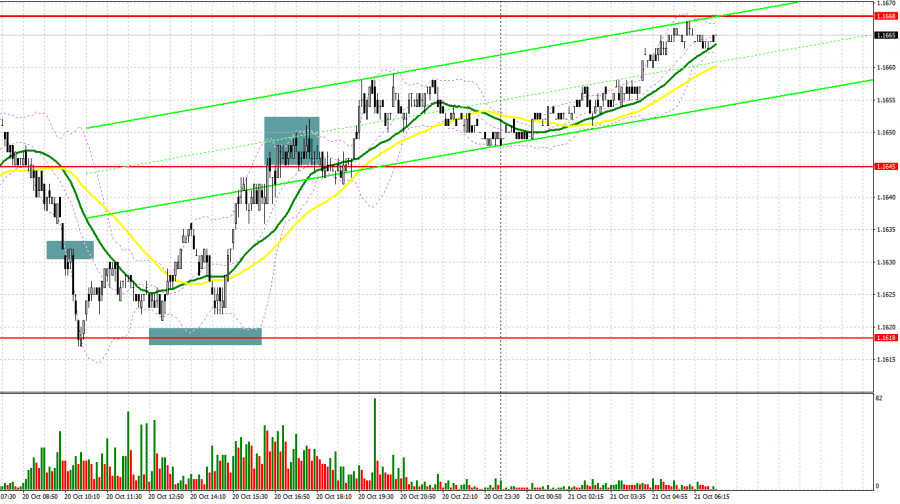 Today we do not have important fundamental statistics in the first half of the day, so the possibility of updating weekly and monthly highs is open for euro bulls. For this, it is necessary to quickly return to the resistance of 1.1668, which limits the entire upward trend observed this week. Only a breakthrough and consolidation above this range, as well as its reverse test from top to bottom, can form a signal to buy the euro, which will preserve the pair's upside potential and make it possible for us to count on a recovery to the high of 1.1691. It is quite close to the 17th figure and to 1.1713, where I recommend taking profits. The next target is the area of 1.1742. If the pressure on the pair persists, an equally important task for the bulls is to protect the support at 1.1646, in the area of which the moving averages are, playing on the side of the bulls. Forming a false breakout there creates a good entry point into long positions, and will also lead to confirmation of the lower border of the rising channel, which the bears broke yesterday with a sharp drop in the euro during the European session. If the bulls are not active at this level, I advise you to postpone long positions to the 1.1623 area, or even lower - from the low of 1.1593, counting on a rebound of 15-20 points at once. 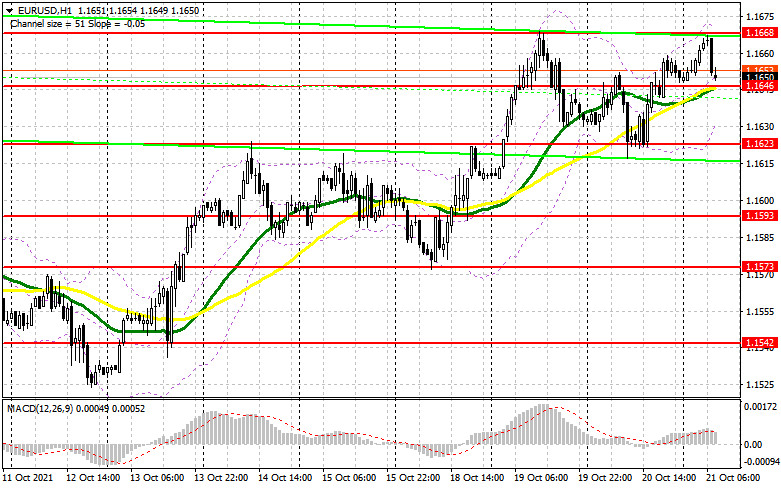 The bears managed to protect the resistance at 1.1668 in today's Asian session, but so far the market is on the side of the euro bulls. The absence of important fundamental statistics in the first half of the day plays into the hands of the bulls. Therefore, only a false breakout in the 1.1668 area will return the real pressure to the pair, which will push it to the middle of the 1.1646 horizontal channel. A breakthrough and a test of this level from the bottom up will lead to forming a signal to open new short positions and to attacking the bulls' stop orders, which will quickly bring EUR/USD to the lower border of 1.1623, beyond which it will be extremely difficult to get out. The next target will be the area of 1.1593, where I recommend taking profits. A test of this area would mean a resumption of the bearish market for the euro. If the bears are not active at 1.1668, it is best to postpone selling until the test of a large resistance at 1.1691, and to open short positions immediately on a rebound, counting on a downward correction of 15-20 points, it is possible from a larger high of 1.1713.

The Commitment of Traders (COT) report for October 12 revealed an increase in both short and long positions, but there were more of the former, which slightly reduced the negative delta. Political problems in the United States of America have been resolved, and the latest fundamental reports continue to delight traders, which testifies to the continued good pace of the American economic recovery. The fact that the Federal Reserve is already seriously considering scrapping the bond buying program is no longer news that could help dollar bulls at the moment. But the fact that representatives of the European Central Bank began to express concern about the rate of inflation, albeit not in the same form as their colleagues from the Fed - all this allows the European currency to begin to gradually win back its positions. This trend may continue in the future, especially in the case of strong statistics on the European economy. However, the larger medium-term demand for risky assets will remain limited due to the wait-and-see attitude of the ECB. The COT report indicated that long non-commercial positions rose from 196,819 to 202,512, while short non-commercial positions jumped from 219,153 to 220,910. By the end of the week, the total non-commercial net position rose slightly to -18 398 against -22,334. The weekly closing price dropped to 1.1553 against 1.1616.

Trading is carried out above the 30 and 50 day moving averages, which indicates an attempt by the bulls to take control of the market.