EUR/USD: plan for the European session on October 26 COT reports. Euro bears won and achieved a breakdown of the lower border

Yesterday, the euro sharply fell against the US dollar and went beyond the horizontal channel, in which it has been since October 19. Let's take a look at the 5 minute chart and break down the entry points to the market. In my morning forecast, I paid attention to the 1.1643 level and advised you to make decisions from it. Even before the release of data from the IFO Institute for Germany, the euro bulls managed to protect 1.1643 and formed an excellent buy signal from there. The growth was about 20 points, but then the data came out, which turned out to be worse than economists' forecasts, which returned the pressure on the pair. During the US session, all the nearest support levels were broken without a reverse test, so there were no signals to open short positions. At the beginning of the US session, the formation of a false breakout in the 1.1593 area led to a good entry point for buying the euro. The growth was about 25 points.

Before talking about the further prospects for the EUR/USD movement, let's see what happened in the futures market and how the Commitment of Traders positions have changed. The Commitment of Traders (COT) report for October 19 revealed that both short and long positions declined, which led to a slight recovery in the negative delta, as more bears than bulls left the market than. Inflation in the eurozone came out last week, which rose and coincided with economists' expectations. This has forced many representatives of the European Central Bank to revisit the topic of changes in monetary policy. However, the fact that virtually everyone stuck to a wait-and-see attitude and retained stimulus measures in the form of bond purchases after the end of the PEPP program in March next year put some pressure on the European currency. The slowdown in manufacturing and services in the eurozone also prevented euro bulls from getting beyond the 17th figure. However, a key problem in the short term, negatively affecting the euro's growth, is the sharp spread of the fourth wave of coronavirus infection throughout the European Union. In the United States of America, the strong recovery in the economy continues to support the greenback. The fact that the Federal Reserve is already seriously considering curtailing the bond purchase program at its next meeting in November will also limit the euro's upside potential against the US dollar. The COT report indicated that long non-commercial positions fell from 202,512 to 193,320, while short non-commercial positions fell from 220,910 to 205,427 against -18 398. The weekly closing price rose to the level of 1.1613 against 1.1553. 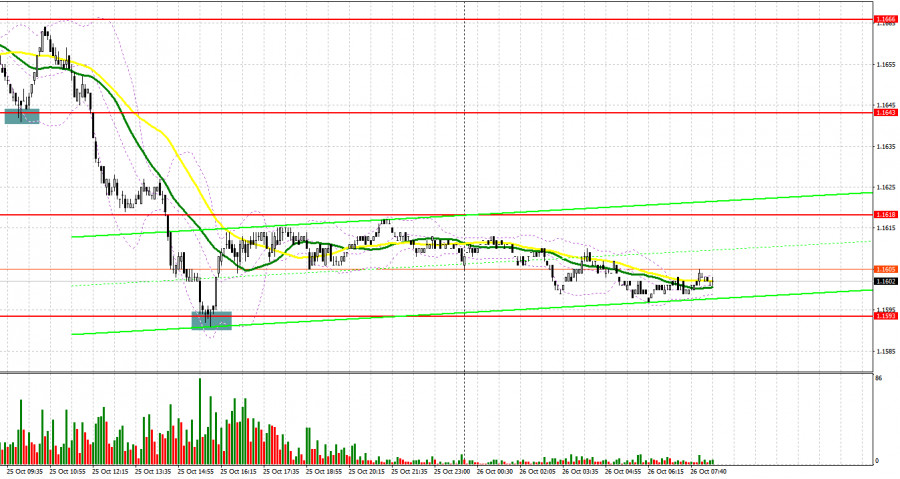 The euro collapsed against the US dollar and now bulls need to try very hard to regain control over the market, which is practically lost. The initial challenge will be to break and consolidate above 1.1616, which they missed yesterday afternoon. The fact that important fundamental statistics for the euro area will not be released today, it is likely that this factor could play on the side of euro bears. Therefore, only a breakthough and a test of this area from top to bottom generates a signal to open long positions, counting on the pair's growth and keeping it in a wider horizontal channel. In this scenario, an equally important goal will be to regain control over the next resistance at 1.1638, below which the moving averages are, limiting the pair's upward potential. A breakthrough of this range with a similar consolidation creates another entry point to buy, which will lead EUR/USD to the local high of 1.1663, where I recommend taking profits. A better option for buying would be a downward correction in the first half of the day to the support area at 1.1593. Forming a false breakout there, similar to the one I discussed above, will be an excellent signal to open long positions. I advise you to buy EUR/USD immediately on a rebound only after the first test of the 1.1573 low, or even lower - from the level of 1.1542, counting on an upward rebound of 15-20 points within the day.

The bears achieved their goal and brought the pair out of the horizontal channel, in which it had been for quite a long time. The absence of fundamental statistics on the eurozone today may further worsen the bulls' position, so the bears' initial goal is to protect the resistance at 1.1616. Forming a false breakout there creates the first signal to open short positions, which will provide an excellent entry point in the market with the goal of pulling down the pair to the support of 1.1593, which we could not get out of yesterday. A breakthrough and test of this area from the bottom up will increase the pressure on the pair and open the way to the lows: 1.1573 and 1.1542. I recommend taking profits on short positions there. In case the euro rises during the European session and the bears are not active around 1.1616, I advise you to postpone short positions until the next resistance test at 1.1638. But even there, it is best to open short positions after forming a false breakout. The best option for selling EUR/USD immediately on a rebound will be last week's high in the 1.1663 area. You can count on a downward correction of 15-20 points. 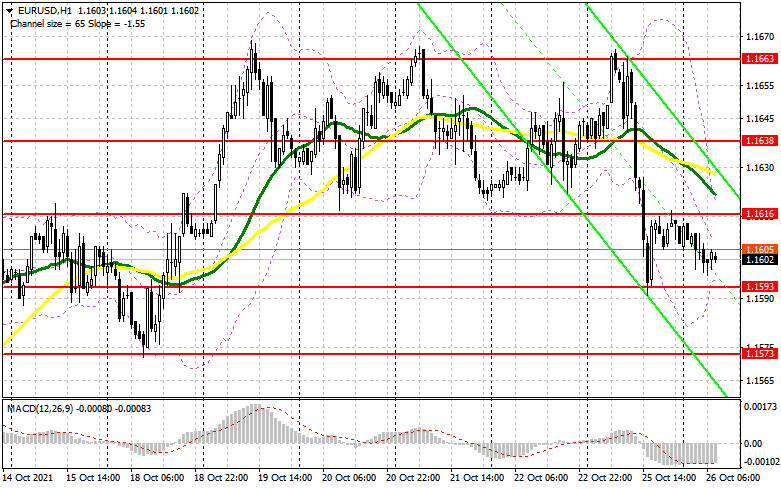 Trading is carried out below 30 and 50 moving averages, which indicates the formation of a new downward trend.