EUR/USD: plan for the European session on October 5. COT reports. Euro bulls are losing strength. Bears aim to return to

Yesterday's attempt by euro bulls to continue the upward correction of the pair was quite successful, but in today's Asian session, active short positions of risky assets are again observed, which calls into question the further growth prospects of EUR/USD. Let's take a look at the 5-minute chart and analyze the entry points that were formed yesterday. Despite the weak data on the indicator of eurozone investor confidence, the euro continued its upward correction in the first half of the day. The first attempt to consolidate above 1.1611 was unsuccessful, which resulted in forming a false breakout and a signal to open short positions. However, it did not come to the implementation of this entry, and after a while a false breakout with a signal to buy the euro was formed at this level. This entry point was already much more profitable, which pushed the euro to rise by 25 points. The pair came close to the resistance of 1.1641 in the second half of the day, however, it did not come to its renewal - just a couple of points were missing. In this regard, it was not possible to receive signals to open short positions.

Before talking about the further prospects for the EUR/USD movement, let's see what happened in the futures market and how the Commitment of Traders positions have changed. The Commitment of Traders (COT) report for September 28 revealed a sharp growth in both short and long positions, but there were more of the former, which led to a reduction in the net position. The fact that the United States of America is now going through hard political times has kept the demand for the US dollar all last week and put pressure on risky assets. The prospect of changes in the Federal Reserve's monetary policy as early as November of this year also allowed traders to build long dollar positions without much difficulty, as many investors expect the central bank to begin cutting bond buying programs towards the end of this year. An important report on US nonfarm payrolls is due this week, shedding light on how the central bank moves forward, as a lot now depends on labor market performance. The demand for risky assets will remain limited due to the high likelihood of another wave of the spread of the coronavirus, and its new strain Delta. Last week, the European Central Bank President Christine Lagarde talked a lot about how it will continue to take a wait-and-see attitude and keep the stimulus policy at current levels. However, the observed surge in inflationary pressure in the fourth quarter of this year may spoil the plans of the central bank. The COT report indicated that long non-commercial positions rose from 189,406 to 195,043, while short non-commercial positions jumped quite seriously - from 177,311 to 194,171. At the end of the week, the total non-commercial net position dropped from the level 12 095 to the level of 872. The weekly closing price also dropped to 1.1695 from 1.1726.

Today we are releasing a number of fundamental statistics on activity in the service sector of the eurozone countries and a composite PMI index, which includes the manufacturing sector. If in September these indicators show a slight slowdown, the pressure on the euro will return, and we will see an active return of the pair to the area of local lows. Later in the afternoon, there will be a meeting of eurozone finance ministers, and Lagarde will also make a speech. Whether she will be so conservative in her ultra-low interest rate policy after last week's inflation data for the eurozone remains a big mystery. Any hints of a policy review could support the euro. The initial target of the bulls for the first half of the day is a breakthrough of the level of 1.1625, just below which the moving averages are, playing on the side of the bears. Only a test of this area from top to bottom generates a signal to open long positions in hopes of a further recovery of the euro and a continuation of the upward correction, which is about to end. In this case, the closest target will be the area of 1.1658. Its breakthrough with a similar consolidation forms an additional entry point for long positions, which will lead EUR/USD to new local levels: 1.1688 and 1.1721, where I recommend taking profits. If the pressure on the pair and weak data on activity in the eurozone services sector persists, long positions can be opened only if a false breakout is formed in the 1.1590 area, to which the pair was actively descending in today's Asian session. I advise you to buy EUR/USD immediately on a rebound only after the first test of the September low of this year around 1.1564, or even lower - from the level of 1.1538, counting on an upward rebound of 15-20 points within the day. A renewal in this area will be evidence of a renewed bearish trend.

Bears are actively returning to the market, especially after another failure in the US Senate to vote on raising the national debt limit. Today's fundamental data on the euro area could further exacerbate the situation and return the pressure on the euro, so it is better to stick to selling EUR/USD from large resistance levels. Forming a false breakout in the 1.1625 area, where the moving averages pass, will be one of such signals. This will provide an excellent entry point into short positions with the aim of moving to the major support at 1.1590, below which the bears did not manage to break through yesterday. Only this level leaves a chance for the bulls to recover the euro. A breakthrough and a test of this area from the bottom up will increase the pressure on the pair and open the way to the lows: 1.1564 and 1.1538, where I recommend taking profits. If the bears are not active in the 1.1625 area in the first half of the day, I advise you to open short positions only after forming a false breakout in the 1.1658 area. Selling EUR/USD immediately on a rebound is best only after testing the new local resistance at 1.1688, counting on a downward correction of 15-20 points. 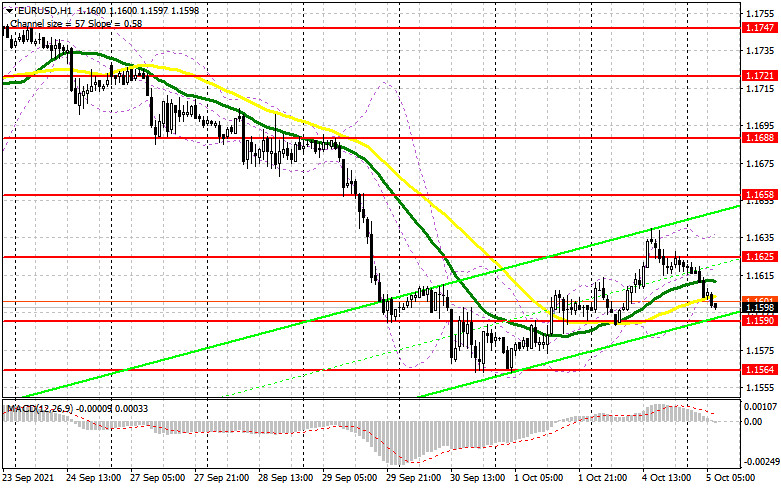 Trading is carried out below 30 and 50 moving averages, which indicates an attempt by the bears to build a new downward trend.

A breakthrough of the upper border of the indicator in the 1.1635 area will lead to a new wave of euro growth. Surpassing the lower boundary at 1.1590 will increase the pressure on the pair.