In the first half of the day, trading in the market was relatively calm and no buy/sell signals were formed. Meanwhile, in the second half of the day, the situation drastically changed. Let's look at the M5 chart and track entry points. A false breakout at around 1.1586 ahead of the ECB's decision announcement generated a strong buy signal. As a result, the euro soared by over 100 pips. During the course of the North American session, an additional buy signal appeared after a breakout at 1.1668 and its re-test top/bottom. Short positions could be opened on a rebound from the resistance level of 1.1691. 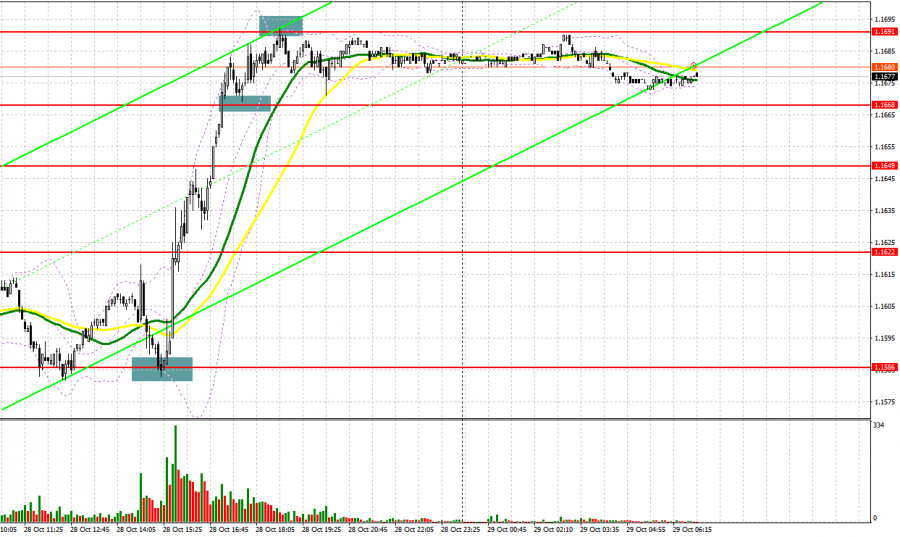 A row of important reports is set to be released in the eurozone today. The market will focus on the eurozone's GDP for the third quarter and its inflation rate. Inflation plays an essential role for the ECB that is still considering growing consumer prices to be temporary. To extend the upward trend, bulls should break above 1.1689. That is why they are now focusing on this mark. In case of optimistic results and a steady economic recovery in the eurozone, the euro is likely to strengthen in the first half of the day. A breakout at 1.1689 and its test top/bottom could generate a strong buy entry point. In such a case, the targets are seen at 1.1713 and 1.1742 where traders should lock in profit. The price might also approach a further target set at 1.1775. However, it could become possible if the US macroeconomic reports scheduled for today come out worse than forecast. In the first half of the day, bulls' main task will be to protect the support level of 1.1659 even if EUR/USD retraces amid a disappointing GDP report. Moving averages are below this mark. A false breakout at 1.1659 is likely to signal a strong buy entry point. If there is a lack of bull activity at this level, traders should open long positions in the area of 1.1626, as well as after the price bounces from the low of 1.1586, allowing an intraday correction of 15-20 pips.

EUR bears clearly did not expect such a turn of events after the ECB meeting. Nevertheless, they still have a chance to take control of the market. Their task for today will be to form a false breakout at 1.1689, especially if the inflation rate in the eurozone accelerates further. If so, a sell signal could be generated and the euro could go down to the support level of 1.1659. Only a breakout and a test of this level bottom/top are likely to make an additional sell signal. In such a case, the pair could plunge to 1.1626 where there are moving averages. If the price breaks through this range, EUR/USD is likely to tumble to 1.1586 where traders should lock in profit. Otherwise, if the quote rises in the first half of the day and there is a lack of bear activity at 1.1689, short positions could be opened only after the price tests the high of 1.1713. Traders could also go short from the resistance level of 1.1742 after the quote bounces, allowing a correction of 15-20 pips. 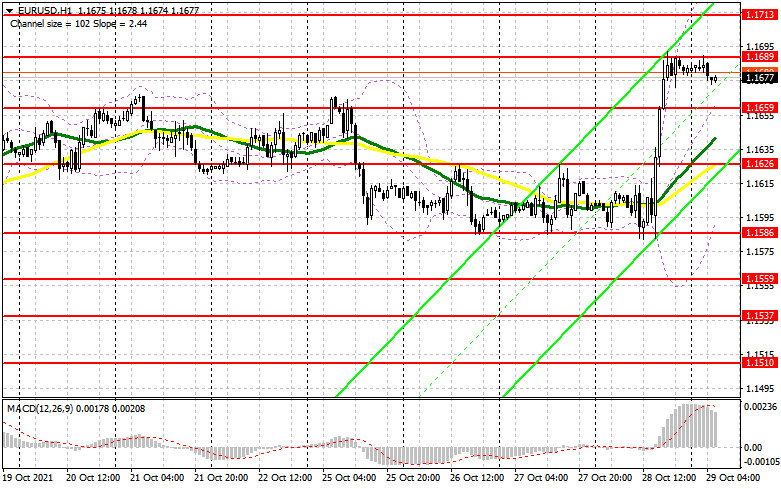 The COT report as of October 19 logged a decrease in the number of both short and long positions, which led to a negative delta, as more sellers exited the market than buyers. In the previous week, data on the inflation rate in the eurozone came out. The reading increased and came in line with economists' forecasts. This forced many ECB policymakers to consider the possibility of monetary policy tightening. However, the fact that the stimulus program was left unchanged exerted pressure on the euro. A slowdown in business activity in the manufacturing and services sector prevented buyers from trading higher. At the same time, a rapid spread of the fourth wave of the COVID-19 pandemic across the European Union is weighing on the euro in the short term. In the United States, a steady pace of economic recovery keeps boosting the greenback. The fact that the US Federal Reserve is now considering the possibility of tapering at the upcoming meeting in November will be limiting the euro's upside potential against the US dollar. The COT report also logged a drop in the long non-commercial position to 193,320 from 202,512, while the short non-commercial position fell to 205,427 from 220,910. The total weekly non-commercial net position decreased to -12,107 against -18,398. The weekly closing price rose to 1.1613 versus 1.1553. 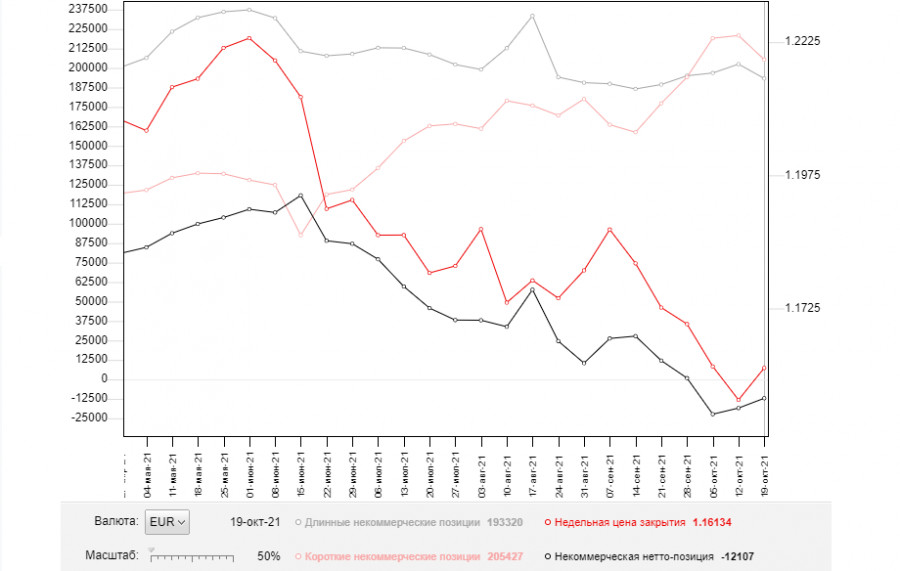 Trading is carried out above 30- and 50-period MAs, reflecting the extension of the bullish trend in the short term.

In case the bullish trend extends, the upper band at 1.1713 will provide resistance to the pair. Meanwhile, the lower band at around 1.1620 will be seen as support.

Non-commercial traders are speculators such as individual traders, hedge funds, and large institutions who use the futures market for speculative purposes and meet certain requirements.