Forecast and trading signals for EUR/USD on October 21. Detailed analysis of the pair's movement and trade deals. A boring 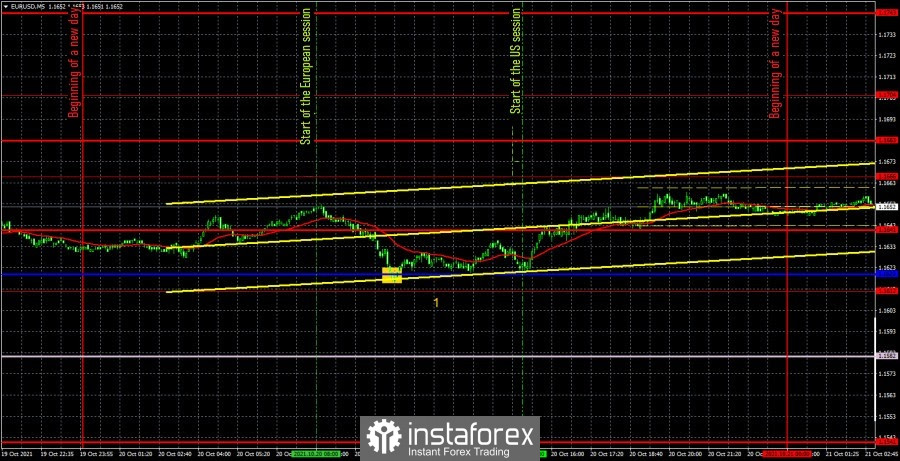 The EUR/USD pair continued to move in its usual style on Wednesday. Namely, the absence of a trend and weak volatility. Volatility amounted to 36 points on Wednesday, which is even less than "little". However, traders should have already gotten used to such "movements" of the pair, as they have been going on for several months. Oddly enough, but today there was even macroeconomic statistics. That is, the markets had something to react to during the day. Another thing is that they did not consider it necessary to do this. The report on European inflation for September turned out to be as uninteresting as possible, since the actual value (3.4%) coincided with both the previous and the forecast. Thus, no special conclusions can be drawn after this report. The chart clearly shows that nothing has changed since the publication of this report (the number "1" in the chart). Now let's move on to trading signals. It, in principle, was formed only on Wednesday. But what! A vivid example of what is called a strong signal. We draw your attention to the fact that the Kijun-sen line increased during the day, which is clearly visible on the 4-hour timeframe, from where it is carried over every day. And it is precisely because of this that a buy signal was formed. After its formation, the price overcame the resistance level of 1.1641 without rebounding from it, so there was no reason to close long positions. It was possible to manually close the long position at a profit of about 25 points in the evening, when the price did not form a sell signal. Excellent result! 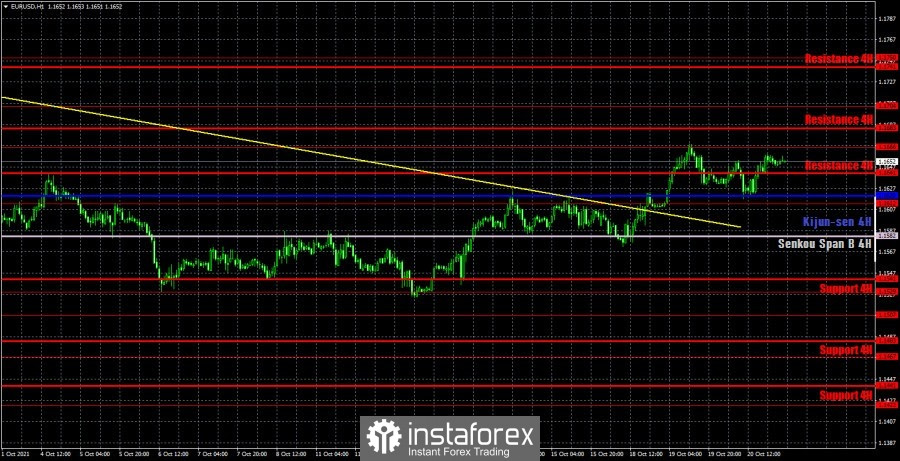 You can see how the euro/dollar pair has corrected to the critical line and at the same time maintained the current upward trend on the hourly timeframe, Thus, we have the right to expect the continuation of the movement to the North, which is still very difficult to explain from the point of view of fundamental analysis. We see that most of the macroeconomic statistics are simply ignored by the markets, and the fundamental topics that exist now do not have any impact on the markets. The only thing that can be noted is that the markets may continue to get rid of the dollar amid weakening confidence that the Fed will announce the start of the QE program in November. On Thursday, we highlight the following levels for trading - 1.1612, 1.1666 and 1.1704, as well as the Senkou Span B (1.1582) and Kijun-sen (1.1620) lines. The Ichimoku indicator lines can change their position during the day, which should be taken into account when looking for trading signals. Signals can be rebounds or breakthroughs of these levels and lines. Do not forget about placing a Stop Loss order at breakeven if the price moves 15 points in the right direction. This will protect you against possible losses if the signal turns out to be false. The calendars of macroeconomic events in the European Union and the States will be empty again on October 21. In theory, one could look at the report on the number of initial and repeated claims for unemployment benefits, but the likelihood that the markets will work it out is negligible. Thus, it looks like another day with minimal volatility awaits us.

Forecast and trading signals for GBP/USD for October 21. Detailed analysis of the movement of the pair and trade deals. 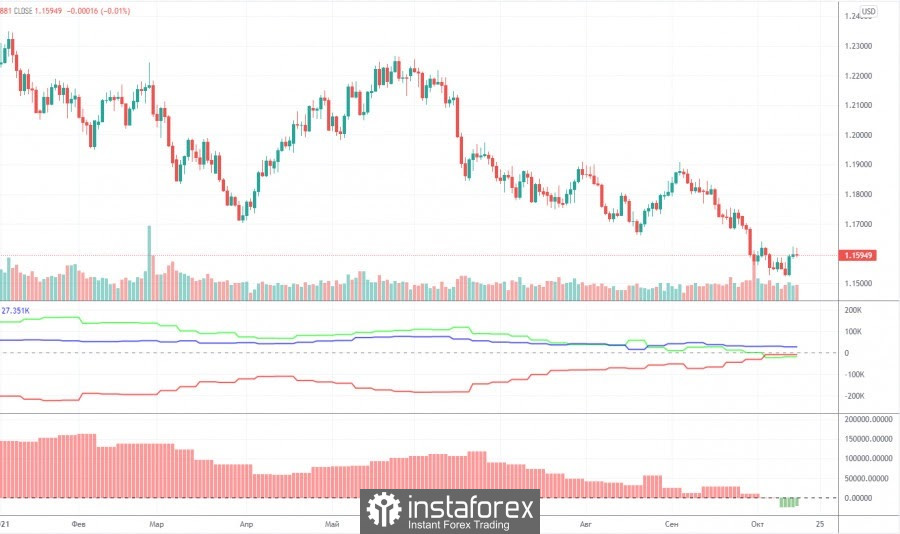 Interesting? Write a comment below.
 Forecast and trading signals for EUR/USD on October 21. Detailed analysis of the pair's movement and trade deals. A boring
Forward 
Backward 