Forecast and trading signals for EUR/USD on October 25. Detailed analysis of the pair's movement and trade deals. Another 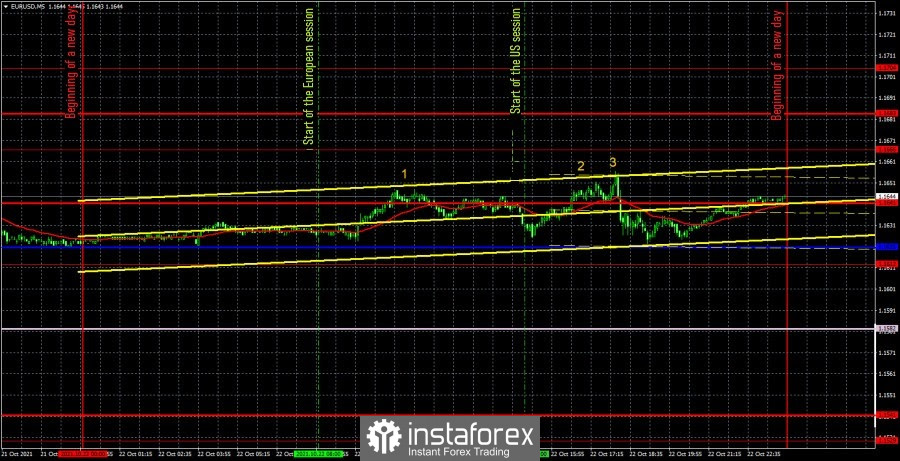 During the last trading day of the week, the EUR/USD pair continued to move as if there was no one on the market at all! Volatility was 35 points despite the fact that during the day there was a fairly large amount of macroeconomic statistics and we also had the speech of Federal Reserve Chairman Jerome Powell. Needless to say, not a single trading signal was formed during the day (although the price was approaching the Kijun-sen line) and for the better! For in such a flat, false signals could have formed, which would have led to losses. Thus, we can only consider the statistics and draw conclusions. The European Union published business activity indices in the services and manufacturing sectors. The first index fell from 56.4 to 54.7 points. The second - from 58.6 to 58.5 points. These data did not have any impact on the movement of the currency pair (figure "1" in the chart). The United States also released data on business activity. In the service sector, it increased from 54.9 points to 58.2. In the production sector, it decreased from 60.7 points to 59.2. But even this data had no effect on the mood of traders (figure "2" in the chart). The only event of the day that influenced the course of trading at least by a bit was Powell's speech, in which market participants considered a couple of hints at the curtailment of the quantitative stimulus program in November. Therefore, the US dollar has risen in price... attention... by 20 points (figure "3" in the chart). Thus, neither "macroeconomics", nor "foundation", nor "technique" impressed on Friday, October 22. 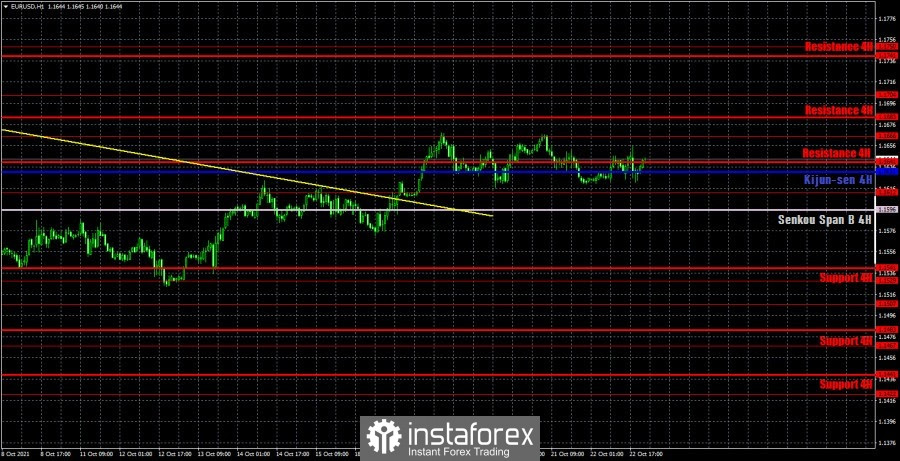 You can see that the euro/dollar pair has generally spent the last few days in an absolute flat on the hourly timeframe. Most of the movements took place between the levels of 1.1612 and 1.1666. Thus, the trend is now absent even on a higher timeframe, and nothing can be added to the conclusions on the lower timeframe. After the euro fell to the level of 1.1525, the quotes slightly moved up. It took them 12 days to go up 150 points... We highlight the following levels for trading on Monday - 1.1612, 1.1666 and 1.1704, as well as the Senkou Span B (1.1596) and Kijun lines -sen (1.1632). The Ichimoku indicator lines can change their position during the day, which should be taken into account when looking for trading signals. Signals can be rebounds or breakthroughs of these levels and lines. Do not forget about placing a Stop Loss order at breakeven if the price moves 15 points in the right direction. This will protect you against possible losses if the signal turns out to be false. Also, do not forget that the lines of the Ichimoku indicator lose their strength in a flat, so they can even be ignored, especially the Kijun-sen line. Or work out only when there are really strong signals. The calendars of macroeconomic events in the European Union and the United States are practically empty on October 25. The consumer confidence report for October will be published in the United States. But what is the likelihood that there will be at least some market reaction to it if much more important events were ignored on Friday?

Overview of the EUR/USD pair. October 25. Jerome Powell did not help the dollar and did not give specifics to the markets

Overview of the GBP/USD pair. October 25. The British are no longer happy with Brexit. Negotiations on the Northern Ireland Protocol will continue

Forecast and trading signals for GBP/USD for October 25. Detailed analysis of the movement of the pair and trade deals. 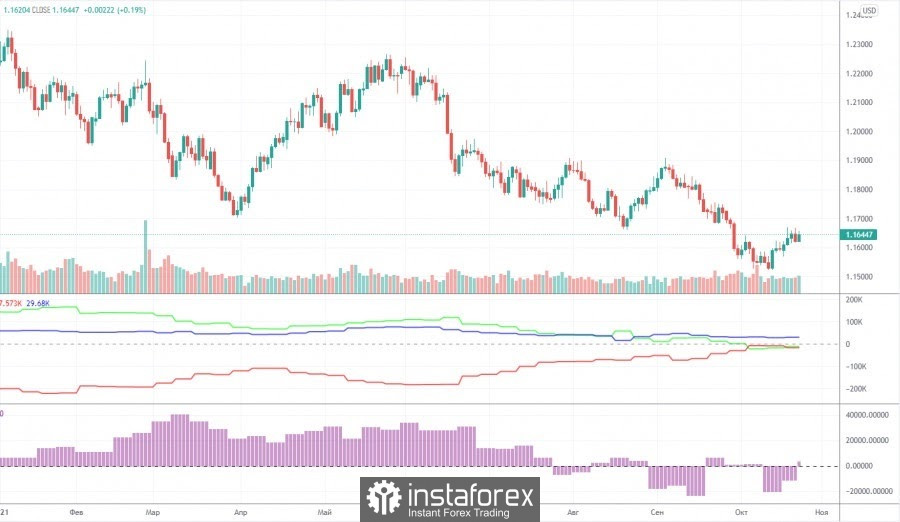 Interesting? Write a comment below.
 Forecast and trading signals for EUR/USD on October 25. Detailed analysis of the pair's movement and trade deals. Another
Forward 
Backward 