Forecast and trading signals for GBP/USD for October 13. Detailed analysis of the movement of the pair and trade deals. The 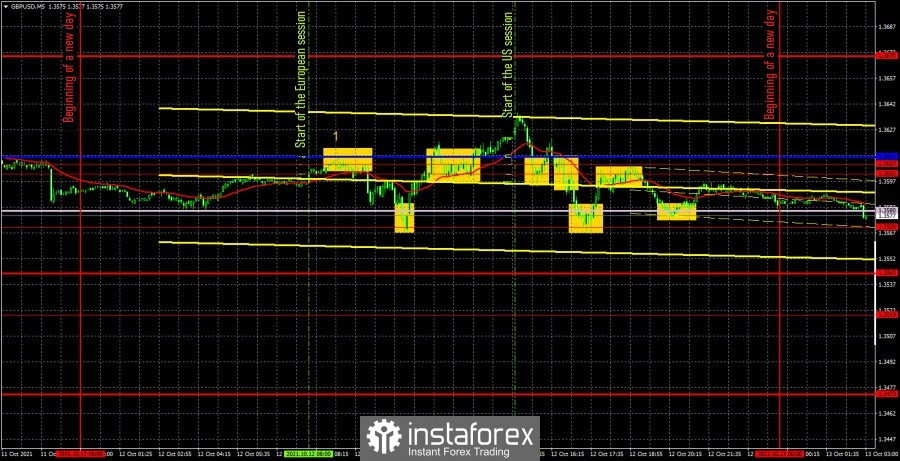 The GBP/USD pair traded slightly better than the EUR/USD pair on October 12, but we draw this conclusion based on the fact that the pair at least moved during the day, and did not stand in one place. Although volatility here remained rather low as well - only 67 points. Nevertheless, 67 points is the value that at least allows you to trade. Unfortunately, the pound did not want to move naturally and calmly during the day. The pair climbed the roller coaster and rode it all Tuesday. The direction of movement changed three times during the day and not based on any fundamental or macroeconomic events. Actually, all macroeconomic publications of the day took place at 6 am GMT in the UK. Despite the fact that the British statistics turned out to be better than the forecasted values, the British currency fell immediately after its release (the number "1" in the chart). Then, during the day, there was already an increase, and again a fall in the second half of the day. Thus, there is no need to talk about any regularity of movements. In addition, it should be noted right away that the quotes were in the range of 1.3570 - 1.3635 all day. And in this range there are also extremum levels of 1.3570, 1.3601, 1.3607, as well as the Kijun-sen and Senkou Span B lines. Another line or level. Let's try to figure out how the pair should have been traded yesterday and whether they followed it at all. The first sell signal was formed near the 1.3601, 1.3607 and Kijun-sen lines. Traders could open short positions at this moment, only on a rebound from the above levels, the price almost immediately rested on the Senkou Span B line. Conclusion - there was no need to open positions. This was followed by a rebound from the level of 1.3570, after which the price was again already halfway to its nearest target - the level of 1.3601 (only 10 points away from it). Thus, this signal too had to be ignored. It is generally very difficult to call the third signal a signal, since the price traded for two hours directly at the levels 1.3601, 1.3607 and Kijun-sen. As a result, there was no clear signal, although the pair eventually settled above these barriers. Traders could open long positions here, and since the price went up 20 points, they should have set Stop Loss to breakeven, at which the deal was closed as a result. By the time the fourth and fifth signals were formed, we already had 3 signals that were not processed or were false. Therefore, these two signals should also be passed. But it was possible to work out a buy signal in the form of a rebound from the level of 1.3570, since the previous signal from this level was not false. The next round of the upward movement stopped around the level of 1.3601, but traders were still able to earn 15 points. 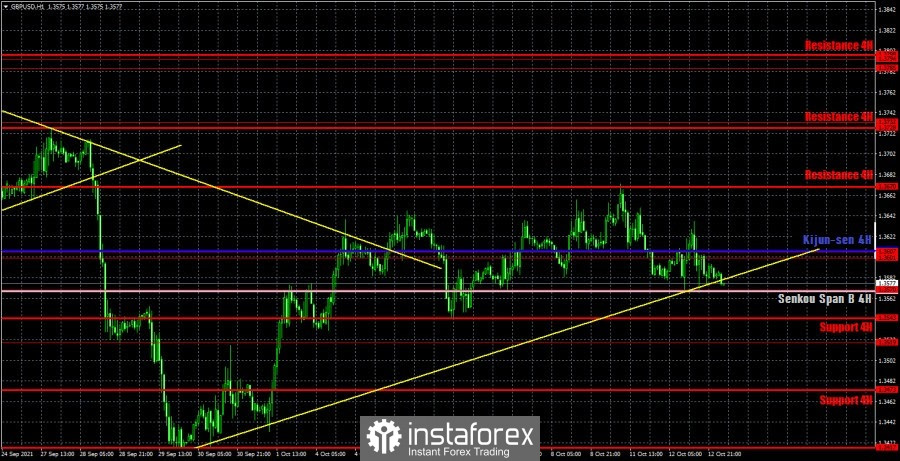 The pound/dollar pair is trying to maintain an upward trend on the hourly timeframe, and traders have a new trend line at their disposal every day. Thus, the pair can work it out, bounce off it, settle lower, then higher. In general, fully comply with the "roller coaster". Thus, now it is simply impossible to draw an unambiguous conclusion about the trend. A rebound from the trend line can be regarded as a buy signal, but it is not a fact that the price will be able to resume its movement to the upside. The Bollinger bands indicate a flat at the 4-hour TF. The Ichimoku indicator lines lose their strength in a flat, and the price can overcome them without any special difficulties. Therefore, it is not recommended to use the Ichimoku line as a source of signal in a flat. We distinguish the following important levels on October 13: 1.3519, 1.3570, 1.3601 - 1.3607, 1.3732. Senkou Span B (1.3569) and Kijun-sen (1.3608) lines can also be sources of signals (but there is a high probability that they are false now). It is recommended to set the Stop Loss level at breakeven when the price passes 20 points in the right direction. The Ichimoku indicator lines can move during the day, which should be taken into account when looking for trading signals. A new portion of macroeconomic statistics on Wednesday in the UK: reports on industrial production and GDP. In the US, we have the inflation report and the Federal Reserve minutes. It is certainly necessary to pay attention to these data, but one should be prepared that all four reports can be ignored by the markets. 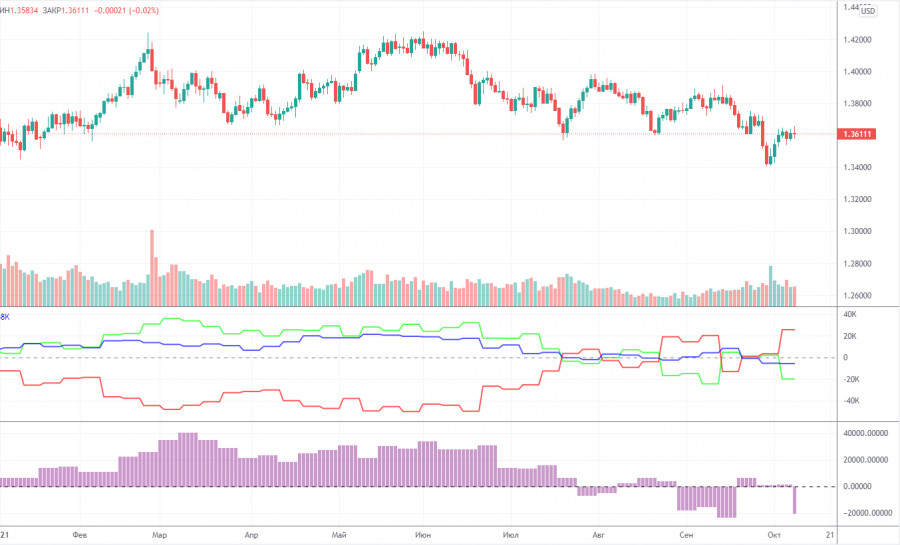 The mood of professional traders became much more bearish again during the last reporting week (September 28 - October 4). "Again" - not because it has been constantly increasing in recent weeks, but because traders could not decide what to do with the British pound. Therefore, their moods became bullish, then returned to being bearish. The last change was again in the direction of bears. Professional traders opened 12,000 sell contracts (shorts) and closed 10,000 buy contracts (longs) in a week. Thus, the net position of the "non-commercial" group decreased by 22,000 contracts at once. In the chart above, you can clearly see how the green line of the first indicator fell. We see the same effect with the second indicator, which displays changes in the net position only of non-commercial traders who are considered the most important and trend-forming group. Thus, the bearish mood now prevails, as in the case of the European currency. Technique is also talking about a very likely resumption of downward movement. However, looking at price changes over the past year and comparing them with Commitment of Traders (COT) reports, it becomes clear that not everything is so simple. Simply because the pound is still very weakly corrected against the global upward trend. For example, the peak value of the "non-commercial" net position over the last year was approximately 40,000. At the moment we have a peak minimum value of - 20,000. And the price is still in the same weak downward correction globally.

Interesting? Write a comment below.
 Forecast and trading signals for GBP/USD for October 13. Detailed analysis of the movement of the pair and trade deals. The
Forward 
Backward 