Forecast and trading signals for GBP/USD for October 20. Detailed analysis of the movement of the pair and trade deals. The 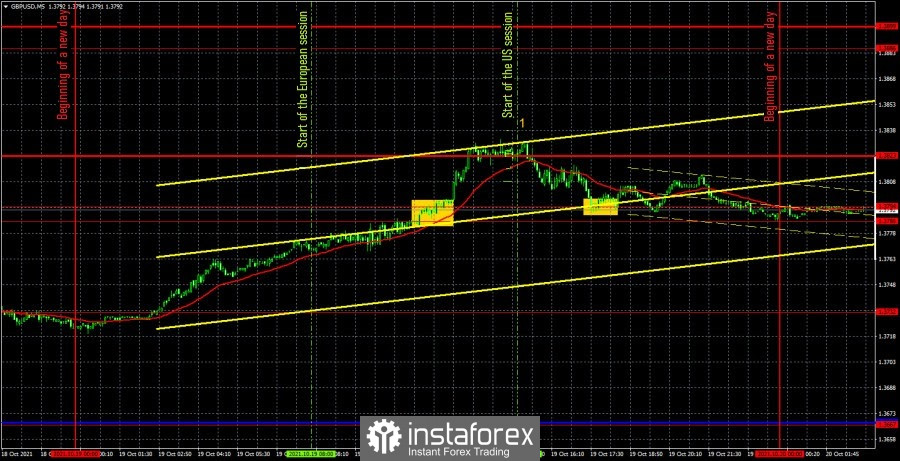 The GBP/USD pair was also trading quite actively on October 19, but at the same time most of the trend, upward movement, also happened at night, when the majority of the traders were sleeping. Thus, if we calculate the volatility only during the daytime, it turns out that the pound/dollar pair went from a minimum to a maximum of only 64 points, which is very little. A little, but still could allow traders to make money. However, first of all, it should be noted that yesterday, only one fundamental event could theoretically have an impact on the movement of the pound/dollar pair. This is the speech of the Governor of the Bank of England Andrew Bailey, which began exactly at the opening of the US trading session (the number "1" in the chart). As you can see, it was at this time that the pound stopped rising, but it is not completely clear what exactly caused it to end: the beginning of the US session or Bailey's speech? Note that the growth of the European currency also ended at about the same time. Anyway, after the pair turned around the resistance level of 1.3823, all long positions should have been closed. And they should have been opened by a buy signal, which was formed in the middle of the European trading session, when the price crossed the 1.3785-1.3794 area. This signal could have earned 23 points. Theoretically, the second buy signal could also be worked out, but it was already, as they say, borderline, as it was formed in the late afternoon. Nevertheless, if traders nevertheless decided to work it out too, they could earn another 5-10 points of profit. 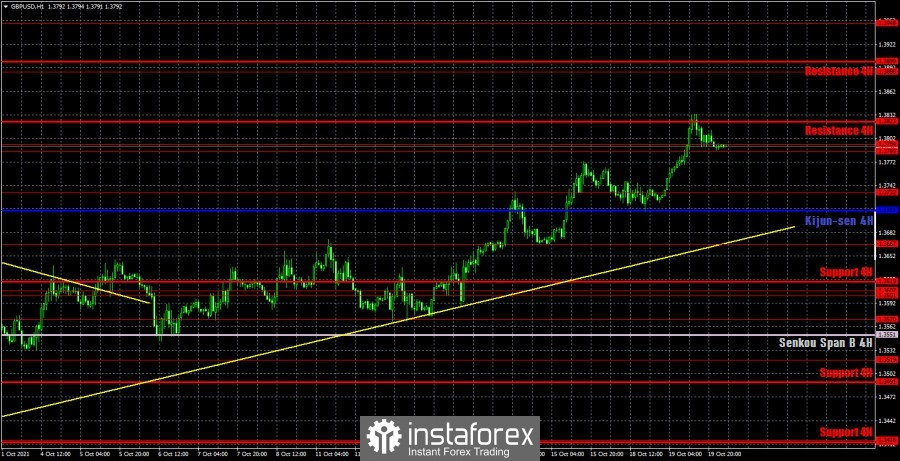 The pound/dollar pair maintains an upward trend on the hourly timeframe, as it continues to be located above the uptrend line. The price, as you can see in the chart, reached the critical line yesterday, but in reality it is an illusion: on the 4-hour timeframe, from where the Kijun-sen line was transferred here, it is clear that there was no rebound. Thus, the bulls simply continued to buy the British currency, which kept the current upward trend. Until the price settles below the trend line, it is not recommended to consider the downward movement and sell. We distinguish the following important levels on October 20: 1.3667, 1.3732, 1.3785 - 1.3794, 1.3886. Senkou Span B (1.3551) and Kijun-sen (1.3709) lines can also be sources of signals. It is recommended to set the Stop Loss level at breakeven when the price passes 20 points in the right direction. The Ichimoku indicator lines can move during the day, which should be taken into account when looking for trading signals. The UK will publish its September inflation report on Wednesday. Considering Bailey's latest statements, the CPI may continue to accelerate to 4% or more. At the moment, it is 3.2% y/y and, judging by the forecasts of analysts, will not change in September. Nothing interesting planned in the US for today. The Federal Reserve Review "Beige Book" is a purely informative booklet that almost never evokes any reaction from the market.

Overview of the EUR/USD pair. October 20. Janet Yellen: Our song is good, start over.

Overview of the GBP/USD pair. October 20. The US dollar is falling on all fronts. The UK is preparing to raise the key rate.

Forecast and trading signals for EUR/USD for October 20. Detailed analysis of the movement of the pair and trade deals. 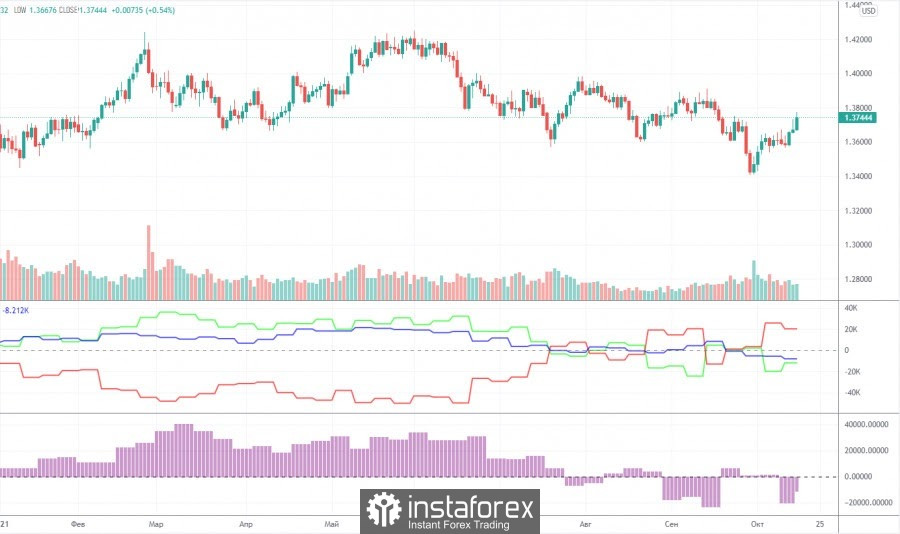 Interesting? Write a comment below.
 Forecast and trading signals for GBP/USD for October 20. Detailed analysis of the movement of the pair and trade deals. The
Forward 
Backward 