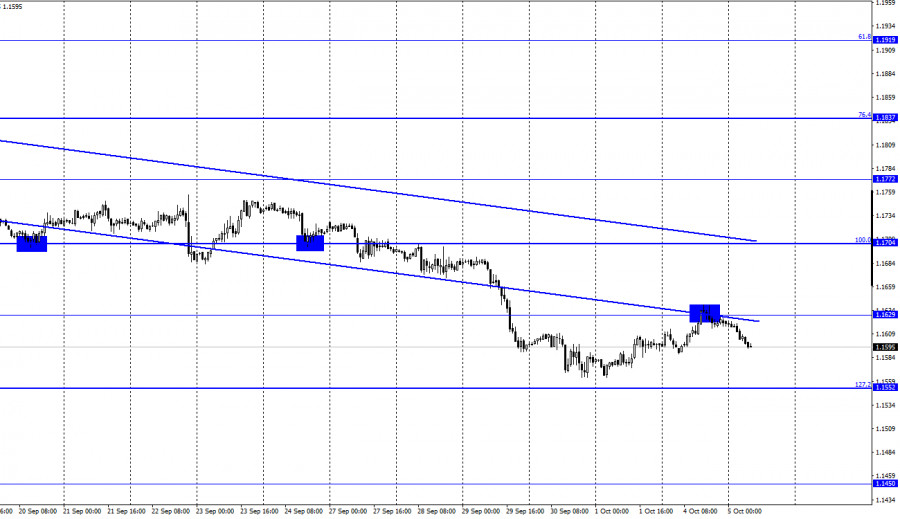 The EUR/USD pair on Monday performed an increase to the corrective level of 1.1629, rebound from it, and a reversal in favor of the US currency. Currently, the quotes have resumed falling in the direction of the corrective level of 127.2% (1.1552). Fixing the pair's rate below the level of 1.1552 will increase the chances of continuing to fall towards the next level of 1.1450. But there was no information background on Monday for the euro/dollar pair. After all, the central banks have held their meetings, and their heads have spoken several times. Traders have nothing else to pay attention to. I mean some global reports and events.

There will be practically no economic reports at all this week. But in the United States, the debate continues with might and main around the issue of increasing the public debt limit. Let me remind you that, according to US Treasury Secretary Janet Yellen, already on October 18, the Treasury will not be able to continue fulfilling its obligations and payments, and the maximum possible debt limit has already been reached. It threatens the United States with a new financial crisis. For several months in a row, Yellen has been urging Congress not to delay the decision to raise the ceiling. However, October has begun, and the decision has not yet been made. The Lower House of Congress approved the decision to freeze the "ceiling" by a simple majority until 2022. However, now the Senate must also make a similar decision. Republicans refuse to vote for this bill, explaining their refusal by the lack of a clear plan for further spending and reducing the national debt in the future. Thus, the Democrats will have to decide alone if they cannot agree with the Republicans. I note that this option is quite possible since there are 50 representatives of the Democratic Party in the Senate. If all of them vote "yes," then the key vote of Kamala Harris will allow making this decision alone. Nevertheless, the Democrats have not given up trying to reach an agreement with the Republicans to consider this decision bipartisan in the future. Republicans, on the other hand, refuse such a proposal, as they do not want to be criticized by Americans for a decision that they do not support. 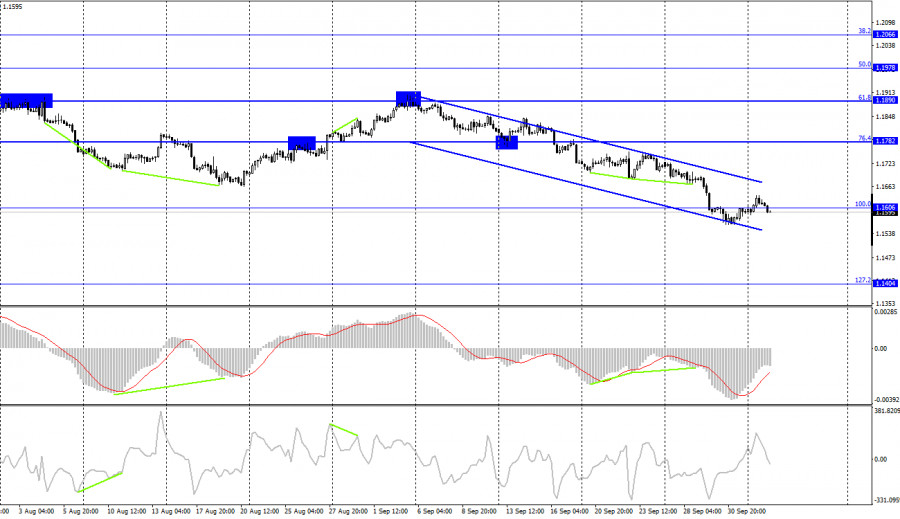 On the 4-hour chart, the pair's quotes performed a new close under the corrective level of 100.0% (1.1606). Thus, the process of falling can be continued in the direction of the next Fibo level of 127.2% (1.1404). Emerging divergences are not observed in any indicator today. The pair's quotes continue to be in a downward trend corridor, which indicates the preservation of the "bearish" mood among traders.

News calendar for the USA and the European Union:

US - ISM index of business activity in the service sector (14:00 UTC).

On October 5, the calendars of economic events of the European Union and the United States are filled with various reports and events. However, there will be few really important ones among them. In the European Union, I can note the speech of ECB President Lagarde, and in the US, the ISM business activity index. 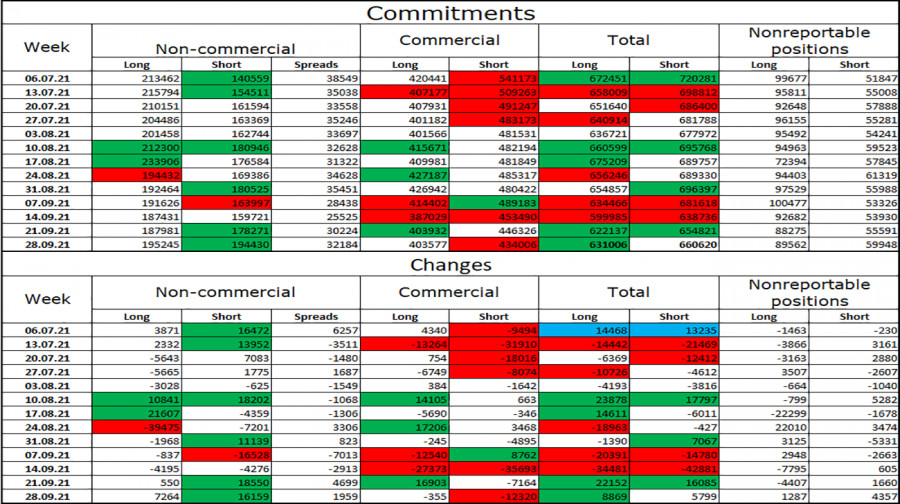 The latest COT report showed that the mood of the "Non-commercial" category of traders changed very much during the reporting week. Speculators opened 7,264 long contracts on the euro and 16,159 short contracts. Thus, the total number of long contracts in the hands of speculators has grown to 195 thousand, and the total number of short contracts - to 194 thousand. Over the past few months, the "non-commercial" category of traders has tended to get rid of long contracts on the euro and increase short contracts. Or increase short at a higher rate than long. This process continues now, and the European currency, meanwhile, continues to fall slightly. Thus, the actions of speculators affect the behavior of the pair at this time. The fall may continue.

EUR/USD forecast and recommendations to traders: