GBP/USD: the plan for the American session on October 11 (analysis of morning deals). The bulls' attempts to continue the

Today in the first half of the day, we watched the bulls' attempts to continue the pair's growth, which failed. But we must pay tribute – they managed to keep the upward trend behind them, which is the main thing now. Let's look at the 5-minute chart and figure out the entry points that were formed. During the European session, it is seen how the bulls break above 1.3653 and test this level from top to bottom, which leads to the formation of a signal to buy the pound in the continuation of growth. However, there is no major movement, and after a jump up by 20 points from the entry point, the initiative ends. An instant return and a reverse test of 1.3653 from the bottom up formed a sell signal for the pound, bringing about 40 points of profit. The formation of a false breakdown in the support area of 1.3613 led to another entry point into long positions. At the time of writing the review, the signal was still in effect. From a technical point of view, nothing has changed in the meantime.

The key task of the bulls remains the breakdown of the 1.3653 level and consolidation on it, which could not be done in the first half of the day. As I analyzed, the same reverse test from top to bottom forms a buy signal for GBP/ USD, which will push the pair to the area of 1.3691. A similar breakdown in this area will form a signal to enter long positions, which will lead to a larger upward movement to the area of 1.3726, where I recommend taking the profits. If the bulls again cannot offer anything above last week's high, the pressure on GBP/USD will return in the afternoon. An important task will be to protect the support of 1.3613, in which there are moving averages playing on the side of the pound buyers. Only the next formation of a false breakdown there will form a good entry point into long positions. Otherwise, the optimal scenario for buying will be a test of the next support of 1.3583. However, it is best to wait for the formation of a false breakdown. I advise you to look at long positions of GBP/USD immediately for a rebound only from the minimum of 1.3545, based on an upward correction of 25-30 points within a day. 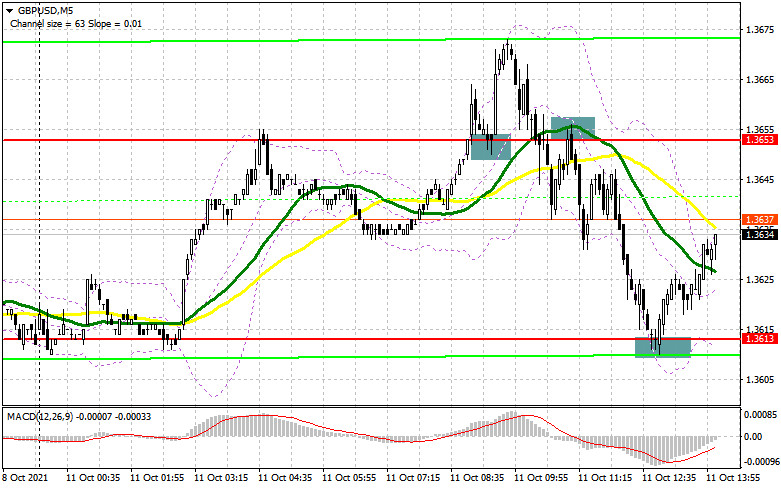 The bears managed to defend the resistance of 1.3653 but could not offer anything in the support area of 1.3613. Only another unsuccessful attempt to consolidate above 1.3653, as well as the formation of a false breakdown, will lead to the formation of a signal to open short positions in the expectation of a return of the downward correction observed in the middle of last week. The next task of sellers will be to regain control over the support level of 1.3613, where the moving averages are located. A breakthrough of this area and its reverse test from the bottom up will form a signal to open short positions to reduce the pair to 1.3583 and update the minimum in the 1.3545 area, where I recommend fixing the profits. However, today, it is impossible to implement such a scenario since the United States has a day off and Columbus Day is celebrated. In case of further recovery of the pound and the absence of those willing to sell at 1.3653, only the formation of a false breakdown in the area of the next resistance of 1.3691 will be a signal to open short positions in GBP/ USD. I advise selling the pound immediately for a rebound from a larger resistance of 1.3726, or even higher - from a maximum of 1.3762, counting the pair's rebound down by 20-25 points inside the day. 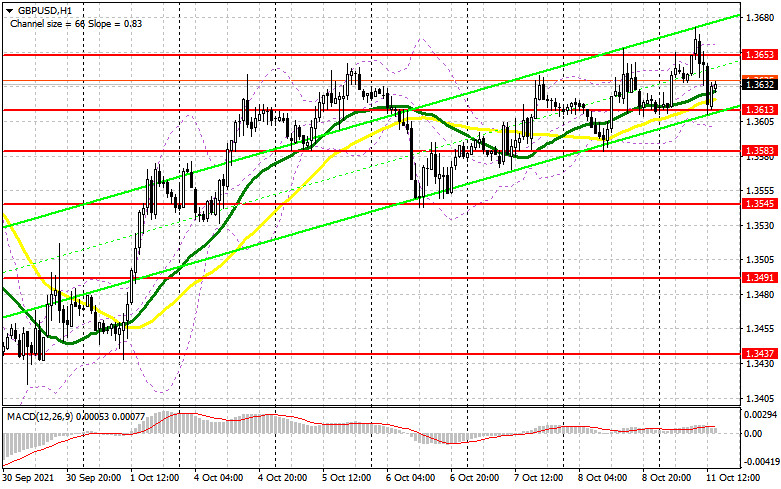 The COT reports (Commitment of Traders) for September 28 recorded both a sharp increase in short ones and an increase in those who bet on further growth of the pound. The British pound has been falling almost all week amid the fuel crisis that has flared up. Problems in supply chains led to disruptions in fuel supply to gas stations, and an acute shortage of drivers forced British Prime Minister Boris Johnson to involve the military in this. The corresponding reaction of buyers of risky assets followed immediately, and the pound collapsed against the US dollar. Strong data on the growth of the UK economy in the 2nd quarter of this year, which were revised upwards, did not help the pound much. However, the pressure on the pair decreased slightly, and traders recalled the statements of the Bank of England on monetary policy that decisions on its change could be made as early as November this year. The only problem that stands in the bulls' way remains the US Federal Reserve, which is also on the path of tightening monetary policy. I have repeatedly advised buying the pound with its significant corrections. So it happened last week. After a sharp decline, traders took advantage of the moment and bought it off at attractive prices. The COT report indicates that long non-commercial positions increased from 51,910 to the level of 57,923.

Trading is conducted above 30 and 50 daily moving averages, indicating buyers of the pound to return to the market.

Interesting? Write a comment below.
 GBP/USD: the plan for the American session on October 11 (analysis of morning deals). The bulls' attempts to continue the
Forward 
Backward 