Yesterday was quite an interesting day for trading, as there were many signals to enter the market. I suggest you take a look at the 5-minute chart and deal with all of them. In the first half of the day, we watched the bulls try to continue the pair's growth, which failed. But we must pay tribute - they managed to keep the upward trend, although now it is under the threat of completion. During the European session, the bulls rose above 1.3653 and tested this level from top to bottom, which resulted in forming a signal to buy the pound in continued growth. However, there is no major movement, and after a jump up 20 points from the entry point, the bulls' initiative ends. An instant return and reverse test of 1.3653 from the bottom up formed a signal to sell the pound, which brought about 40 points of profit. The next signal was formed after forming a false breakout in the support area of 1.3613, which led to another entry point into long positions, which brought more than 30 points of profit. No signals generated during the US session, as the volatility sharply dropped and we did not reach the indicated levels.

Before examining the technical picture of the pound, let's take a look at what happened in the futures market. The Commitment of Traders (COT) report for October 5 revealed a sharp increase in short positions and a reduction in long positions, which led to a shift in the negative zone of the overall net position. Despite the rather active recovery of the pair a week earlier, it was not possible to continue the bullish trend for the pound. Although all the prerequisites for this were there. The data showed that supply chain problems in the UK remain high enough to push prices upward. It is unlikely that such a development of the situation will force the Bank of England to stand on the sidelines for a long time and watch the inflation spiral unfolding. The minutes of the meeting of the British central bank, which was published a week earlier, indicated that changes in monetary policy could be adopted as early as November this year. Therefore, the only problem that stands in the way of the pound bulls is the US Federal Reserve, which, although not going to raise interest rates, is also heading towards tightening monetary policy. Despite all this, I advise you to buy the pound in case of significant corrections, as the trading instrument is expected to grow in the medium term. The COT report indicated that long non-commercial positions fell from 57,923 to 48,137, while short non-commercials jumped from 55,959 to 68,155, leading to a partial build-up of bears' advantage over the bulls. As a result, the non-commercial net position returned to negative territory and dropped from the 1964 level to the -20018 level. By the results of the week, the closing price of GBP/USD dropped to 1.3606 against 1.3700. 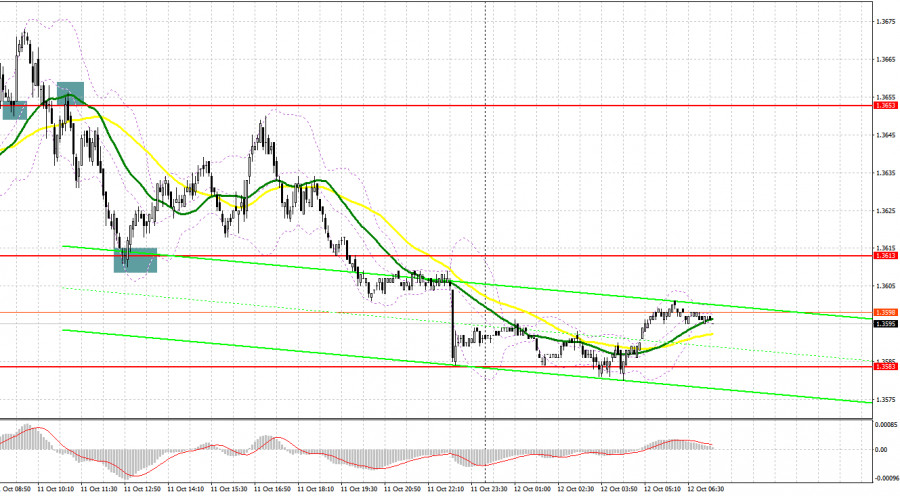 Today we are waiting for quite important reports on the UK economy: changes in the number of applications for unemployment benefits and the unemployment rate. The market is expected to recover and unemployment will decline from 4.6% to 4.5%. If the data exceeds the forecasts of economists, one can expect GBP/USD bulls to actively return to the market. In this case, the bulls are targeting resistance at 1.3609, above which the moving averages, limiting the pair's upward potential, pass. The level was formed yesterday afternoon, therefore it is of an intermediate nature. Only a breakthrough and reverse test of this range from top to bottom will form a signal to buy GBP/USD, which will push the pair even higher - to the 1.3646 area, for which an active struggle was waged all day yesterday. A test of this area will be evidence of the continuation of the bullish trend, however, in order to be more confident, you need to settle higher. A breakthrough of this area will open a direct path to a large resistance at 1.3691, where I recommend taking profits. If the pressure on the pair returns in the first half of the day, and the UK data disappoints traders, I advise you not to rush into long positions. An important task is to protect the support at 1.3571. Only a false breakout there can create a good entry point to longs. Otherwise, the optimal scenario for opening long positions will be a test of the next support at 1.3534, but even there it is best to wait for a false breakout to form. I advise you to watch long positions of GBP/USD immediately for a rebound only from a low like 1.3491, counting on an upward correction of 25-30 points within a day.

The bears are trying to regain control of the market and it seems to be working out. Despite yesterday's regular update of local highs, the bulls lost a lot at the end of the day, and it will be problematic to compensate for these losses today. Bears are counting on weak reports on the labor market, which may return pressure on the pound in the first half of the day. Their primary task is to form a false breakout in the resistance area of 1.3609, by analogy with what I discussed above. This option will result in forming a signal to sell GBP/USD with a goal to decline to support 1.3571. A breakthrough and reverse test of this level from bottom to top will form a signal to open short positions in hopes that the pair would fall to a low like 1.3534. A breakthrough of this range will form another entry point to short positions, while aiming to break the bulls' stop orders of the bulls and a larger fall to 1.3491, where I recommend taking profits. If the pound recovers in the first half of the day and the bears are not active at 1.3609, only a false breakout in the resistance area of 1.3646 will be a signal to sell GBP/USD. I advise you to open short positions in the pound immediately on a rebound from a larger resistance at 1.3691, or even higher - from a high of 1.3726, counting on the pair's rebound down by 20-25 points within the day.

Trading is carried out below 30 and 50 moving averages, which indicates the likelihood of a reversal of the upward trend and the start of active short positions of the pound.