GBP/USD: plan for the European session on October 13. COT reports. Pound bears still fail to take control of the market

A fairly large number of signals to enter the market were formed yesterday. Let's take a look at the 5 minute chart and break down all the entry points. In the first half of the day, we observed the bears' attempts to continue the pair's fall. However, the bears failed. Breaking below support at 1.3571 after the report on the change in the number of applications for unemployment benefits in the UK failed, which resulted in forming a false breakout and a signal to open long positions. As a result, the pair quickly rushes up to the resistance area at 1.3609 and even tries to break it, which brings about 40 points of profit. An unsuccessful breakthrough and return under 1.3609 forms a signal to sell the pound, but I did not wait for a major downward movement. After another attempt to rise above 1.3609 in the second half of the day, the pound returns below this level and again tests it from the bottom up, which forms a sell signal, which translates into a large fall back to the support area of 1.3571. Everything is going according to the morning scenario: the bulls managed to protect this area and, as a result, there is an increase by 35 points.

Today we will receive very important data on the UK GDP, which will most likely set the pound's direction in the first half of the day. A strong report will allow the bulls to return to the 1.3634 level. A reverse test of this range from top to bottom generates a buy signal for GBP/USD, which will push the pair towards 1.3670. A similar breakthrough in this area will form a new entry point to buy the pound, which will lead to a larger upward movement to the 1.3714 area, where I recommend taking profits. The next target will be the area of 1.3748. If the bulls are again unable to offer anything above the middle of the horizontal channel at 1.3634, and the pressure on GBP/USD returns in the morning after a weak GDP report, I advise you not to rush into long positions. An important task will be to protect the support at 1.3546. Only a false breakout there will form a good entry point into long positions. Otherwise, the best scenario for a long position would be a test of the next area of 1.3491, but even there it is best to wait for a false breakout to form. I advise you to watch long positions of GBP/USD immediately for a rebound only from a low like 1.3437, counting on an upward correction of 25-30 points within a day. 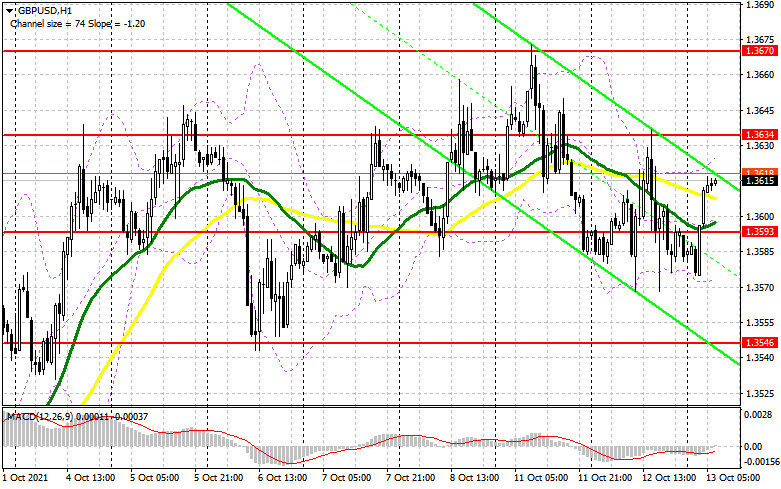 The bears are still unable to take control of the market, since bulls come into play at the slightest decrease in the pair in the area of large levels. Most likely, the bears will focus on protecting the 1.3634 level, since a lot depends on it. If we see an unsuccessful attempt to consolidate above this range after the data on the UK GDP, as well as the formation of a false breakout there, similar to what I discussed above, all this will lead to forming a signal to open short positions in hopes of continuing the pair's downward correction. The next task for the bears is to regain control over the support level of 1.3593, which was formed at the end of yesterday. A breakthrough of this area and its reverse test from the bottom up will form a signal to open short positions in order to pull down the pair to 1.3546 and then to renew the low in the 1.3491 area, where I recommend taking profits. In case the pound recovers further and the absence of those willing to sell at 1.3634, only the formation of a false breakout in the area of the next resistance at 1.3670 will be a signal to open short positions in GBP/USD. I advise you to sell the pound immediately on a rebound from a larger resistance at 1.3714, or even higher - from a high of 1.3748, counting on the pair's rebound down by 20-25 points within the day.

The Commitment of Traders (COT) report for October 5 revealed a sharp increase in short positions and a reduction in long positions, which led to a shift in the negative zone of the overall net position. Despite the rather active recovery of the pair a week earlier, it was not possible to continue the bullish trend for the pound. Although all the prerequisites for this were there. The data showed that supply chain problems in the UK remain high enough to push prices upward. It is unlikely that such a development of the situation will force the Bank of England to stand on the sidelines for a long time and watch the inflation spiral unfolding. The minutes of the meeting of the British central bank, which was published a week earlier, indicated that changes in monetary policy could be adopted as early as November this year. Therefore, the only problem that stands in the way of the pound bulls is the US Federal Reserve, which, although not going to raise interest rates, is also heading towards tightening monetary policy. Despite all this, I advise you to buy the pound in case of significant corrections, as the trading instrument is expected to grow in the medium term. The COT report indicated that long non-commercial positions fell from 57,923 to 48,137, while short non-commercials jumped from 55,959 to 68,155, leading to a partial build-up of bears' advantage over the bulls. As a result, the non-commercial net position returned to negative territory and dropped from the 1964 level to the -20018 level. By the results of the week, the closing price of GBP/USD dropped to 1.3606 against 1.3700.

Trading is carried out in the area of 30 and 50 moving averages, which indicates market uncertainty with the succeeding direction.

A breakthrough of the upper border of the indicator in the area of 1.3630 will lead to a new wave of growth for the pound. A breakout of the lower boundary at 1.3575 will increase the pressure on the pair.