GBP/USD: plan for the European session on October 20. COT reports. Pound breaks to new highs and aims for 1.3828

The British pound hit another monthly high around 1.1830 and is aiming for a breakthrough. Let's take a look at the 5-minute chart and talk about the signals that were generated yesterday. Smooth breakthrough and consolidation above resistance at 1.3770, followed by its renewal from top to bottom, formed an excellent entry point for long positions, which resulted in further growth in GBP/USD and a renewal of the 1.3805 high. A breakthrough of this level also caused the pair to rise, however, we did not reach the target value of 1.3839. A slight downward correction of the pound in the second half of the day and a false breakout around 1.3790 - all this formed another entry point into long positions, which brought about 25 points of profit. 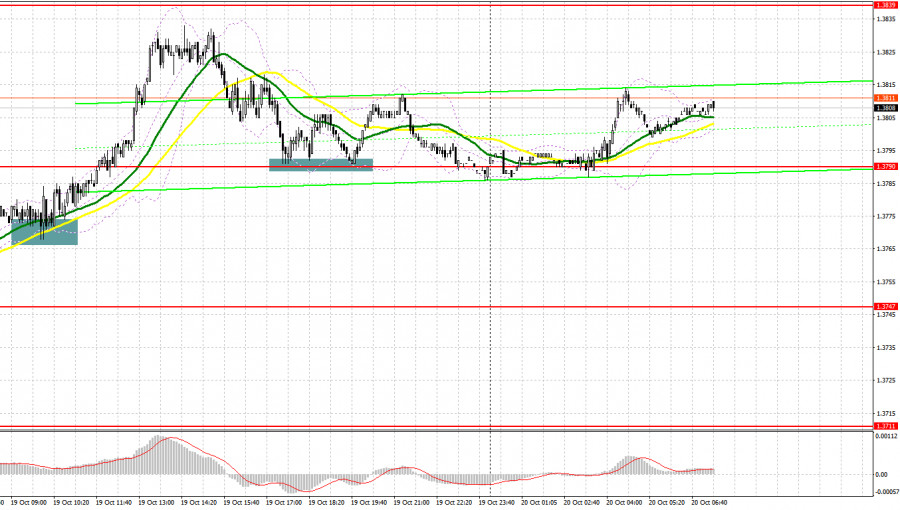 Very important statistics for the UK are coming out today. Pay attention to inflation indicators for September this year, which are now a serious problem for the Bank of England. If the data goes beyond economists' forecasts, it is possible that in the near future the central bank will indeed curtail economic stimulus programs and raise interest rates - this will be a good signal for pound bulls. The primary task for today is to protect the support at 1.3788, in the area of which the moving averages are, playing on their side. In general, the upward trend and forming a false breakout in the 1.3788 area creates a good entry point to long positions with the goal of recovering to the weekly high of 1.3828. A breakthrough and consolidation above this range with a reverse test from top to bottom will allow the British pound to reach new local levels: 1.3872 and 1.3910, where I recommend taking profits. The next target is still the area of 1.3955, but it will be available only in case of a very strong rise in inflation in September this year. If the bulls are not active in the 1.3788 area, the best option to buy the pound would be to test the next support at 1.3748. I advise you to watch long positions of GBP/USD immediately for a rebound only from a low like 1.3711, counting on an upward correction of 25-30 points within a day.

The bears managed to form resistance at 1.3828 yesterday, which is only temporary protection against a further upward trend. It will be possible to talk about the pair being under pressure again only after the next formation of a false breakout at this level, which may occur during the release of inflation data in the UK. A slowdown in inflationary pressures will be good news for the Bank of England, which will spoil the sentiment of pound bulls. And although such a scenario will only lead to GBP/USD hanging in a horizontal channel and will not seriously affect the bulls' plans, it is better than nothing. An equally important goal for the bears is to regain control over the support level at 1.3788, as there are moving averages playing on the side of the bulls. A breakthrough of this area and its reverse test from the bottom up will form a signal to open short positions in hopes that the pair would fall to 1.3748, and then to renew the low in the area of 1.3711, where I recommend taking profits. In case the pound recovers further and the bears are not active at 1.3828, only a false breakout in the area of the next resistance at 1.3872 will be a signal to open short positions in GBP/USD. I advise selling the pound immediately on a rebound from the larger resistance at 1.3910, counting on the pair's rebound down by 20-25 points within the day. 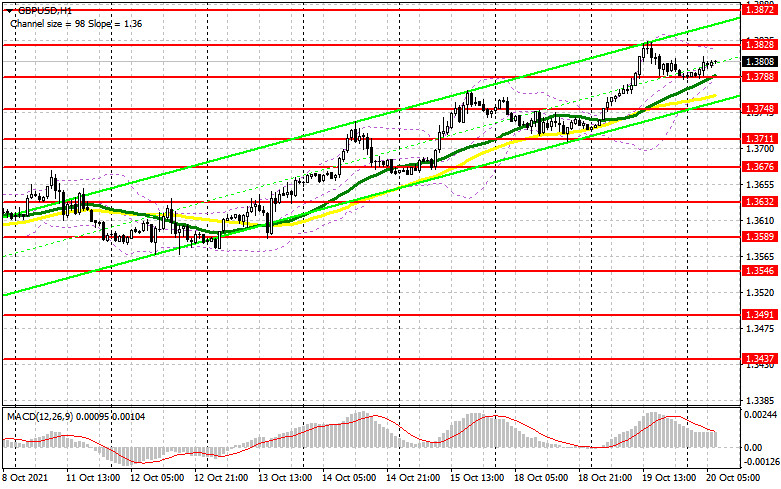 The Commitment of Traders (COT) report for October 12 revealed a reduction in both short and long positions, but there were more of the former, which led to a slight recovery in the negative net position. Despite rather active attempts by the bears at the beginning of that week to resist the bullish trend, bulls turned out to be stronger, which led to further growth of the pound against the US dollar. Reducing a number of problems with disruptions in supply chains that shook the pound earlier this month, are now gradually returning to the market players who are betting on further strengthening of risky assets. Constant speeches and statements by representatives of the Bank of England that it is necessary to take inflationary pressures more seriously, also add confidence to the pound bulls. The minutes of the central bank meeting last week confirmed the BoE's intentions to take seriously the option of raising interest rates during the November meeting - a bullish signal for GBP/USD. Therefore, the only problem that stands in the way of the pound bulls is the US Federal Reserve. Although they are not going to raise interest rates, they are also heading for tightening monetary policy. However, the British pound in these conditions looks much more preferable. The COT report indicated that long non-commercial positions declined from 48,137 to 46,794, while short non-commercials dropped from 68,155 to 58,773, which partially reduced the advantage of sellers over buyers. As a result, the non-commercial net position amounted to 11,979 against -20,018. The closing price of GBP/USD remained almost unchanged for the week: 1.3591 against 1.3606.

Trading is carried out above 30 and 50 moving averages, which indicates the formation of a new bullish scenario.