GBP/USD: plan for the European session on October 5. COT reports. Pound slows down in the resistance area of 1.3622, and

Yesterday, the growth of the pound slowed down in the resistance area of 1.3622 and the bulls were unable to offer the market anything else to continue the upward correction. From what we see on the chart now, the bears are clearly aiming to strike back. Let's take a look at the 5-minute chart and analyze the trades that were formed yesterday. Forming a false breakout and failure to consolidate above resistance at 1.3572 in the first half of the day resulted in forming a signal to sell the pound, however, after a movement down by about 10 points, the pressure quickly eased. The retracement and breakthrough of 1.3573 indicated a continuation of the bull market. After some time, it was possible to observe the reverse test from top to bottom of the level of 1.3573, which resulted in forming a signal to open long positions in continuation of the upward correction. As a result, the growth amounted to more than 50 points and slowed down around 1.3622. In the afternoon, after an unsuccessful attempt to continue to rise above this range, the pressure on the pound returned, and a false breakout at 1.3622 provided an excellent entry point for short positions.

Before examining the technical picture of the pound, let's take a look at what happened in the futures market. Commitment of Traders (COT) report for September 28 revealed both a sharp rise in short ones and an increase in those who bet on the pound's succeeding growth. The British pound has been falling for almost the entire week amid the fuel crisis that has flared up. Supply chain problems have led to disruptions in the supply of fuel to gas stations, and an acute shortage of drivers has prompted British Prime Minister Boris Johnson to engage the military. The corresponding reaction of the buyers of risky assets followed immediately and the pound fell against the US dollar. Strong data on the growth of the UK economy in the second quarter of this year, which was revised upward, did not help the pound much, however, perhaps due to them, the pressure on the pair slightly decreased, and traders recalled the statements of the Bank of England on monetary policy about the fact that decisions to change it can be made as early as November this year. The only problem that stands in the way of the bulls is the US Federal Reserve, which, although not going to raise interest rates, is also on the path of tightening monetary policy. I have repeatedly advised to buy the pound in case of significant corrections. This happened last week as well. After a sharp decline, traders seized the moment and bought it back at attractive prices. The COT report indicated that long non-commercial positions rose from 51,910 to 57,923, while short non-commercials jumped from 52,128 to 55,959, leading to a partial build-up of bulls' advantage over bears. As a result, the non-commercial net position regained its positive value and increased from -218 to 1964. The closing price of GBP/USD increased to 1.3700 against 1.3662 by the end of the week.

Today we are waiting for quite interesting reports on activity in the service sector, as well as the composite PMI of the UK, which includes the manufacturing sector. Only positive changes in these indicators in September this year can lead to the pound's further growth along the trend. Otherwise, we will see the strengthening of the downward correction and the renewal of large support levels, which will be very useful after the recent growth. The resistance of 1.3622 keeps the pound from further upward correction of the bulls, above which it was not possible to break through yesterday. Only a breakthrough and reverse test of this level from top to bottom will form a new signal to buy GBP/USD, which will push the pair even higher - to the 1.3674 area. A test of this area will be evidence of a continuation of the bullish trend formed last Thursday after a major drop in the pair that has been observed all week. A breakdown of this area will also open a direct path to a large resistance at 1.3715, where I recommend taking profits. If the pair is under pressure in the first half of the day, and the data on activity in the service sector seriously disappoint traders, I advise you not to rush into long positions. An important task for the bulls is to protect the support at 1.3575, where the moving averages, playing on the side of the bulls, pass. Only a false breakout there can create a good entry point into long positions. Otherwise, a test of the next support at 1.3533 will be the optimal buying scenario, but even there it would be best to wait for a false breakout to form. I advise you to watch long positions of GBP/USD immediately for a rebound only from a low of 1.3490, counting on an upward correction of 25-30 points within the day.

The bears no longer control the market, but there is still hope for their return due to the political crisis in America. The primary task is to control the new support level at 1.3575, which coincides with the lower border of the upward correction channel formed on September 30th. A breakthrough of this area and its reverse test from the bottom up will form a signal to open short positions in hopes of a decline to the level of 1.3533. A breakthrough of this range, which may take place in the afternoon during the good data on the ISM index, will form another entry point to short positions with the goal of breaking the bulls' stop orders and a larger fall to the low of 1.3490, where I recommend taking profits. If the pound recovers in the first half of the day, only a false breakout in the resistance area of 1.3622, by analogy with what I discussed above, will become a signal to sell GBP/USD. I advise you to open short positions in the pound immediately on a rebound from a larger resistance at 1.3674, or even higher - from a high of 1.3715, counting on the pair's rebound down by 20-25 points within the day. 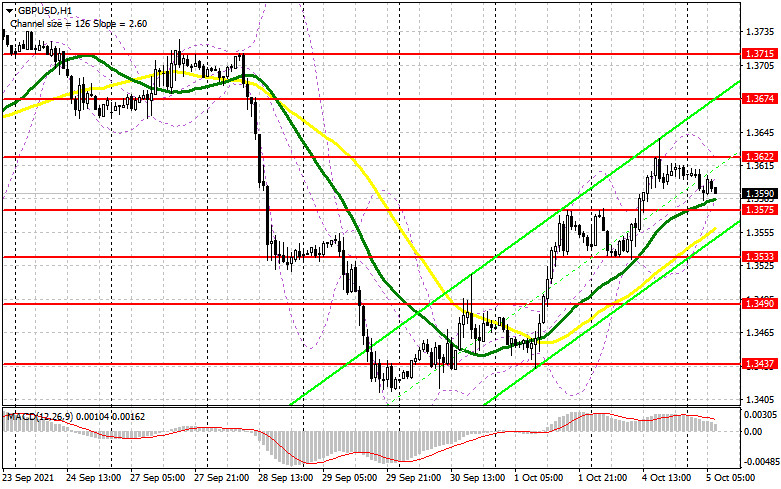 Trading is carried out above 30 and 50 moving averages, which indicates a slight preponderance of the pound bulls in the current situation.

Interesting? Write a comment below.
 and, GBP/USD: plan for the European session on October 5. COT reports. Pound slows down in the resistance area of 1.3622
Forward 
Backward 