Yesterday, pound bulls coped with the resistance at 1.3587 and managed to regain control over the market, having achieved renewed weekly highs. Let's take a look at the 5 minute chart and talk about where you could enter the market. There were some interesting signals in the morning. The first false breakout of the 1.3592 level formed an excellent entry point for short positions, which led to a decline in the pound to the 1.3570 area, where the pressure quickly dried up. A similar entry point was formed again closer to the middle of the day, but there the bulls' initiative ended even faster than the first time. Some time later, a breakthrough of 1.3592 (which was revised to 1.3587) occurred, but I did not see a reverse test of this range from top to bottom, so I had to skip all the upward movement observed during the US session. No other signals were generated. 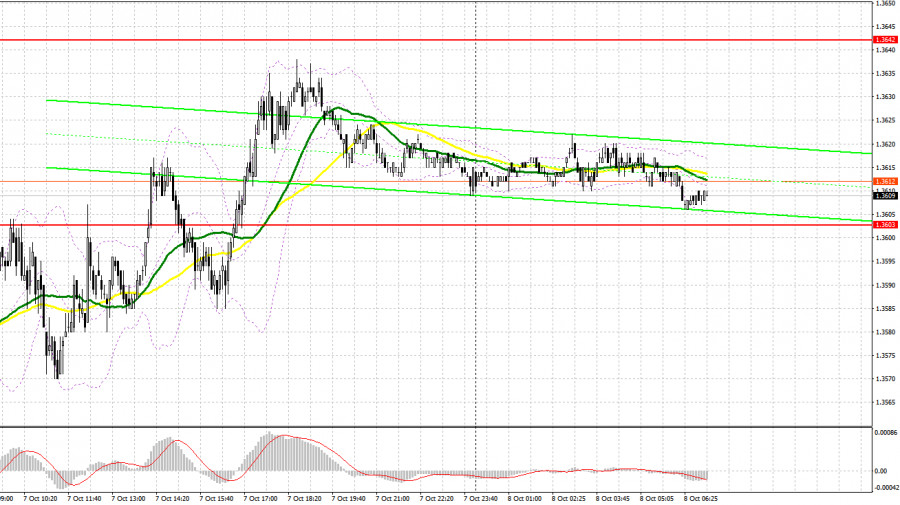 The summary and minutes of the meeting of the Financial Policy Committee of the Bank of England will be published today, which may strengthen the pound, as we all remember that at the central bank's last meeting, it announced plans to raise interest rates in November this year. A more detailed study of the minutes will help to understand the plans of the central bank. However, it is worth remembering that the Non-Farm Employment Change report on the US labor market will be published this afternoon, where a significant increase in the number of jobs is predicted - this is a direct signal for the strengthening of the US dollar. Therefore, bulls will have to try very hard to maintain the bullish trend in the first half of the day, as another breakthrough at 1.3545 will put an end to it. For a start, pound bulls need to rise above the resistance level of 1.3634. A breakthrough and reverse test of this level from top to bottom will generate a buy signal for GBP/USD, which will push the pair towards 1.3673. A test of this area will be evidence of a return to the bull market. Its breakdown will open a direct road to resistance at 1.3726, where I recommend taking profits. If the pressure on GBP/USD persists in the first half of the day, I advise you not to rush into long positions. An important task for the bulls is to protect support at 1.3587, which formed at the end of yesterday. Only a false breakout there will form a good entry point into long positions. Otherwise, the optimal buying scenario will be the test of the next support at 1.3445, but even there it is best to wait for the formation of a false breakout. I advise to watch long positions of GBP/USD immediately for a rebound only from a low like 1.3491, counting on an upward correction of 25-30 points within a day. 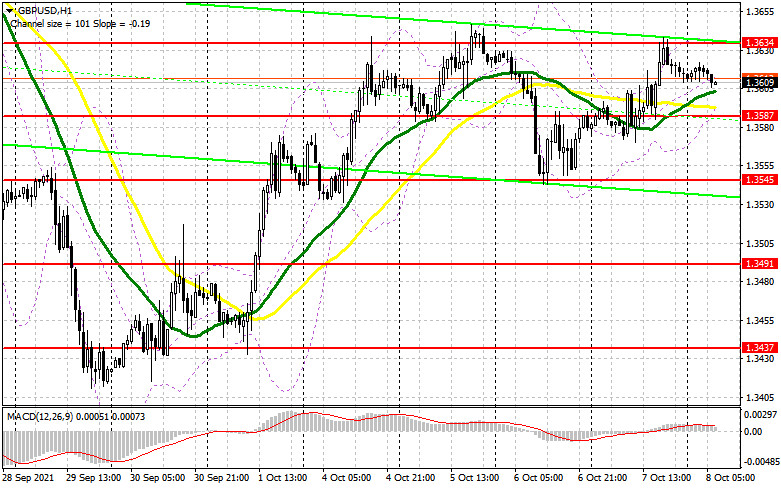 The bears did everything they could yesterday, but that was not enough. However, it is too early to say that the initiative has been lost. As I noted above, everything will depend on the data on the labor market. Today their task is to protect the 1.3634 level . Forming a false breakout there will result in creating a signal to open short positions in continuation of the downward correction observed in the middle of this week. The next task is to regain control over the new support level of 1.3545. A breakthrough of this area and its reverse test from the bottom up will form a signal to open short positions in hopes that the pair would fall to 1.3491 and then a renewal of the low in the area of 1.3437, where I recommend taking profits. However, the implementation of such a scenario is possible only if we receive very strong indicators for the growth of the number of jobs in the United States. If the pound recovers and there is no one willing to sell at 1.3634, only a false breakout in the area of the next resistance at 1.3673 will be a signal to open short positions in GBP/USD. I advise you to sell the pound immediately on a rebound from a larger resistance at 1.3726, or even higher - from a high of 1.3762, counting on the pair's rebound down by 20-25 points within the day.

The Commitment of Traders (COT) report for September 28 revealed both a sharp rise in short ones and an increase in those who bet on the pound's succeeding growth. The British pound has been falling for almost the entire week amid the fuel crisis that has flared up. Supply chain problems have led to disruptions in the supply of fuel to gas stations, and an acute shortage of drivers has prompted British Prime Minister Boris Johnson to engage the military. The corresponding reaction of the buyers of risky assets followed immediately and the pound fell against the US dollar. Strong data on the growth of the UK economy in the second quarter of this year, which was revised upward, did not help the pound much, however, perhaps due to them, the pressure on the pair slightly decreased, and traders recalled the Bank of England's statements on monetary policy about the fact that decisions to change it can be made as early as November this year. The only problem that stands in the way of the bulls is the US Federal Reserve, which, although not going to raise interest rates, is also on the path of tightening monetary policy. I have repeatedly advised to buy the pound in case of significant corrections. This happened last week as well. After a sharp decline, traders seized the moment and bought it back at attractive prices. The COT report indicated that long non-commercial positions rose from 51,910 to 57,923, while short non-commercials jumped from 52,128 to 55,959, leading to a partial build-up of bulls' advantage over bears. As a result, the non-commercial net position regained its positive value and increased from -218 to 1964. The closing price of GBP/USD increased to 1.3700 against 1.3662 by the end of the week.

Trading is carried out in the area of 30 and 50 moving averages, which indicates some market uncertainty with the succeeding direction.