GBP/USD is moving somehow sideways in the short term after reaching a supply zone. The bias remains bullish. So, the pair could resume its upwards movement. In the short term, a temporary decline was expected after its amazing rally.

The pair is trying to strengthen and attract more buyers before jumping towards fresh new highs. Today, the UK Gfk Consumer Confidence dropped from -13 to -17 points which is bad for the pound sterling.

It remains to be seen how the GBP/USD pair could react after the publication of the UK Retail Sales data. The indicator is expected to register a 0.6% growth in September after a 0.9% drop in August. In addition, the United Kingdom Flash Services PMI could drop from 55.4 to 54.5 points while the Flash Manufacturing PMI is expected to decline from 57.1 to 56.1. Weak UK data could weaken the pound sterling.

Don't forget that the US is to release its Flash Manufacturing PMI and the Flash Services PMI as well. 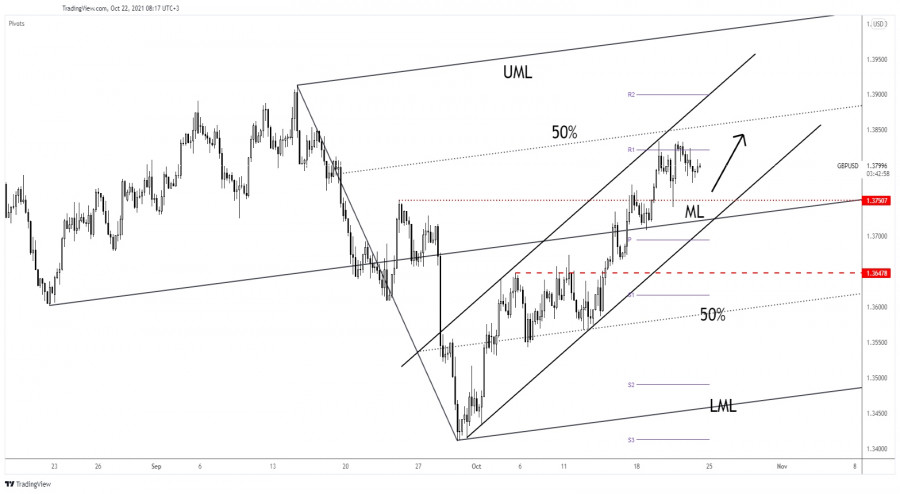 GBP/USD is trapped within an up channel. It has found resistance at the weekly R1 (1.3822) level and now it moves in a range. 1.3750 former high is seen as static support. Its false breakdown with great separation below this level signaled strong buyers.

Technically, the upside pressure is high as long as it stays above 1.3750 and above the uptrend line. The current sideways movement is seen as a continuation pattern. Taking out the R1 could activate further growth.

GBP/USD is still bullish as long as it stays within the up channel's body and as long as it's traded above 1.3750. Coming back to test and retest the support levels could bring new long opportunities.

Making a valid breakout above the R1 (1.3822), a closure above 1.3833 could represent a bullish signal. The major upside target stands at the ascending pitchfork's upper median line (UML).