GBP/USD to rise in short term

GBP/USD rebounded and recovered after its most recent drop as the US dollar Index reached new lows in the early morning. The pair maintains a bullish bias, so further growth is favored. It is still trapped within an ascending channel, so we could still look for new long opportunities.

The pound sterling remains bullish after receiving a helping hand from the UK economic data on Friday. The Flash Manufacturing PMI was reported at 57.7 points, above 56.1 estimates and versus 57.1 in the previous reporting period. Moreover, the Flash Services PMI increased from 55.4 to 58.0 points, exceeding the 54.5 forecasts. The economic figures signaled that the expansion continues. 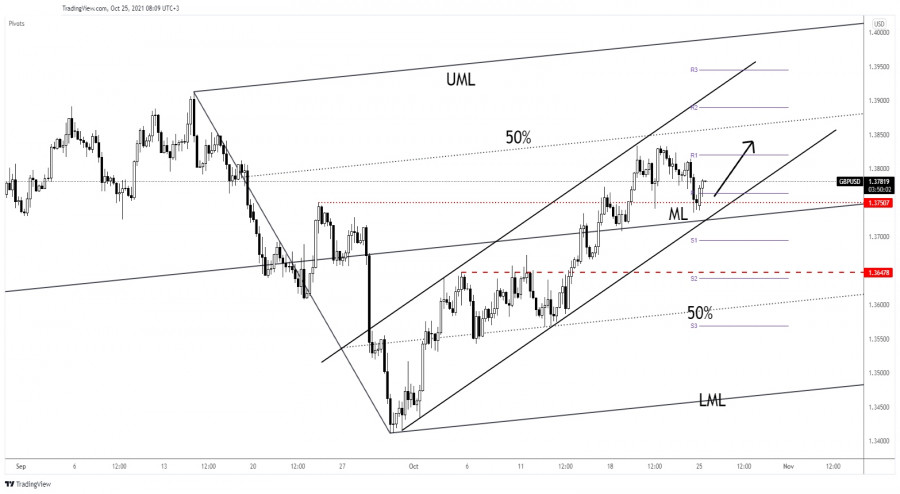 As you can see, the GBP/USD pair slipped lower after failing to make a new higher high. It moves somehow sideways between 1.3833 and 1.3750 levels. Techncially, it could still increase as long as it stays above the uptrend line. The current sideways movement could represent a continuation pattern.

From the technical point of view, the GBP/USD failed to approach and reach the ascending pitchfork's median line (ML) or the uptrend line in its previous attempts signaling that the upside pressure is high.

The GBP/USD pair could activate a larger upwards movement if it makes a valid breakout above the R1 (1.3820) and most important through 1.3833. former high. In the short term, a minor consolidation above the weekly pivot point (1.3764) could bring fresh long opportunities.

In addition, making a false breakdown with great separation below the immediate support levels or printing a major bullish engulfing could represent a bullish signal. The ascending pitchfork's upper median line (UML) is seen as a major upside target.