How to trade the EUR/USD currency pair on October 18? Simple tips for beginners. The euro came out of one side channel and

30M chart of the EUR/USD pair. 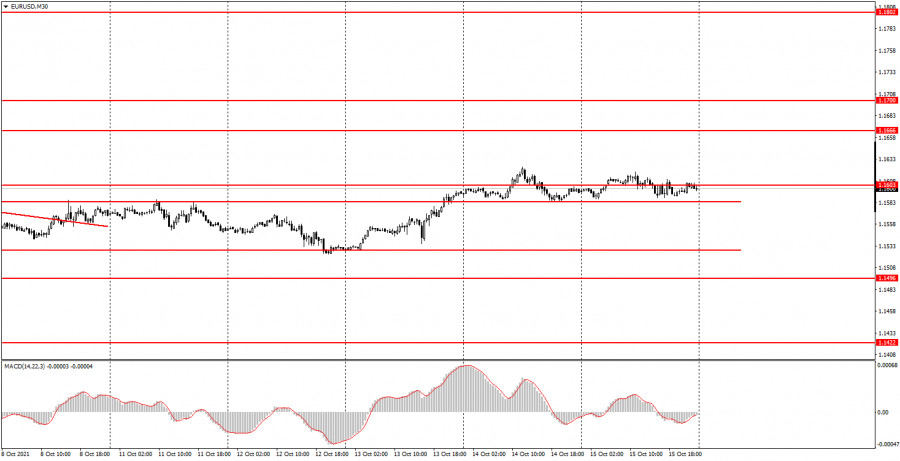 The EUR/USD currency pair continued to trade ultra calmly on Friday. The pair's quotes left the side channel on Thursday, where they spent about 5-6 working days. However, having gained a foothold above it, the upward movement did not continue. The price is now just moving along the upper border of the channel. Thus, it is not for nothing that we did not recommend trading on the MACD indicator. At the moment, there is still no trend for the euro/dollar pair. Volatility is still extremely weak. For example, on Friday, the pair passed 30 points from the minimum to the day's maximum. Recall that we recommend a minimum Take Profit of 30 points. Even two macroeconomic reports in the States did not have any impact on the course of trading. Retail sales in September rose more than forecast, and the consumer sentiment index from the University of Michigan declined slightly compared to the previous month. Neither the first nor the second reports provoked any market reaction at all.

5M chart of the EUR/USD pair. 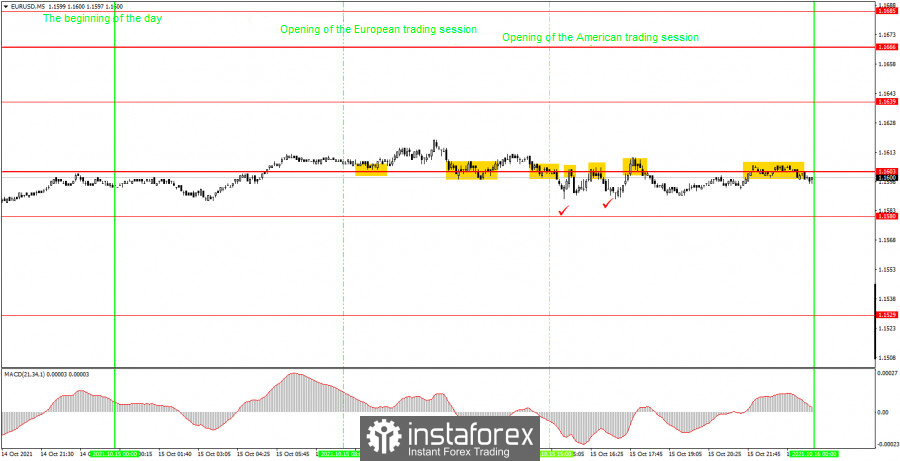 On a 5-minute timeframe, the technical picture looks eloquent. Since the pair managed to pass "as much as" 30 points during the day, it is not surprising that most of the formed trading signals turned out to be false. The pair was also in a frank flat all day. Recall that a flat is a very unpleasant event for traders. For example, on Friday, the pair just traded around the level of 1.1603 all day. And it was lucky that most of the signals were filtered out. Otherwise, there would have been serious losses. Let's start analyzing trading signals. Initially, the price bounced from the level of 1.1603 and went up about 10 points, which was not enough for either Take Profit or Stop Loss. Then the price returned to the level of 1.1603 and bounced off it once again. Thus, novice players had to continue to stay in long positions. However, the second buy signal turned out to be false, and the price subsequently consolidated below the level of 1.1603. Thus, long positions had to be closed manually at a loss of 12 points. Formally, by this time, two false signals had already been formed near the level of 1.1603. Thus, it was no longer necessary to open new deals. However, one deal could still be tried to work on the sale. Unfortunately, as it is easy to guess, the sell signal also turned out to be false, as well as all the following four signals. Each time, the price returned to the level of 1.1603 and bounced off it. However, this transaction could still be closed at a minimum profit of about 5 points manually in the late afternoon.

On the 30-minute timeframe, the flat has been canceled. However, the upward trend has not been formed, and the volatility still does not exceed 40-50 points. Moreover, the pair continues to trade in another side channel. Thus, it is still very inconvenient to trade on a 30-minute TF, and we still do not recommend tracking signals from the MACD indicator. On the 5-minute timeframe, the key levels for October 18 are 1.1529, 1.1580, 1.1603, 1.1639. Take Profit was set at a distance of 30-40 points. Stop Loss - breakeven when the price passes in the right direction by 15 points. At 5M TF, the target can be the nearest level if it is not close or too far away. If it is located – then you should act on the situation or work on Take Profit. On Monday, the only report of the day will be industrial production in the United States. However, we do not believe that it will be followed by at least some reaction of the markets.

1) The strength of the signal is calculated by the time it took to generate the signal (rebound or overcoming the level). The less time it took, the stronger the signal.

2) If two or more false signals were formed near any level (which did not trigger Take Profit or work out the nearest target level), then all subsequent signals from this level should be ignored.

3) In a flat, any pair can form many false signals or not form them at all. But in any case, at the first signs of a flat, it is better to stop trading.

4) Trade transactions are opened between the beginning of the European session and the middle of the American session, when all transactions must be closed manually.

5) On a 30-minute TF, signals from the MACD indicator can be traded if there is good volatility and a trend confirmed by a trend line or a trend channel.

Price support and resistance levels - the levels that are the targets when opening purchases or sales. Take Profit levels can be placed near them.

Red lines are channels or trend lines - display the current trend and show which direction it is preferable to trade now.

MACD indicator (14, 22, 3) - a histogram and a signal line, the intersection of which are signals to enter the market. It is recommended to use it in combination with trend constructions (channels, trend lines).

Important speeches and reports (always contained in the news calendar) can greatly influence the movement of a currency pair. Therefore, it is recommended to trade as carefully as possible or exit the market to avoid a sharp price reversal against the previous movement during their exit.

Interesting? Write a comment below.
 How to trade the EUR/USD currency pair on October 18? Simple tips for beginners. The euro came out of one side channel and
Forward 
Backward 