How to trade EUR/USD on October 25? Simple tips for beginners. The pair remains in a limited sideways range 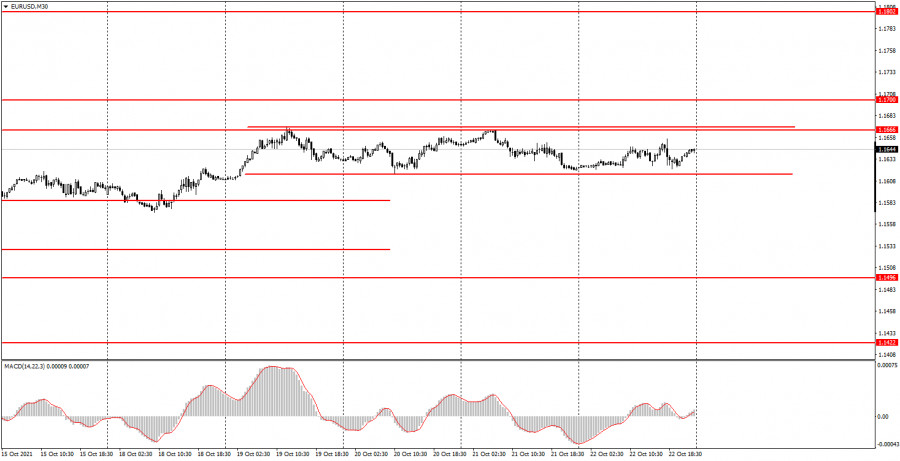 The EUR/USD pair continued to trade very calmly on Friday. Unlike the pound/dollar pair, which has been trading in an upward trend for several weeks. However, the EUR/USD pair continues to move not just calmly, but inside the horizontal channel. At first, we did not want to plot the channel on the chart, hoping that after leaving one side channel, the pair would still start moving in a more trendy way. However, the harsh reality shows that the euro is still unwilling to trade actively. Traders continue to keep the pair in a sideways range with low volatility, which in most cases does not exceed 40 points. This was the case on Friday, when the pair went from a low to a high of 36 points, despite the fact that that day there were both macroeconomic reports and a speech by Federal Reserve Chairman Jerome Powell. However, does it make sense to talk about macroeconomic statistics if the markets do not pay any attention to it anyway? The first tick in the chart below marks the time when the data on business activity in the European Union was released. The second is data on business activity in the United States. As you can see, there was no market reaction. The price only fell by around 20 points during Powell's speech (third tick)... 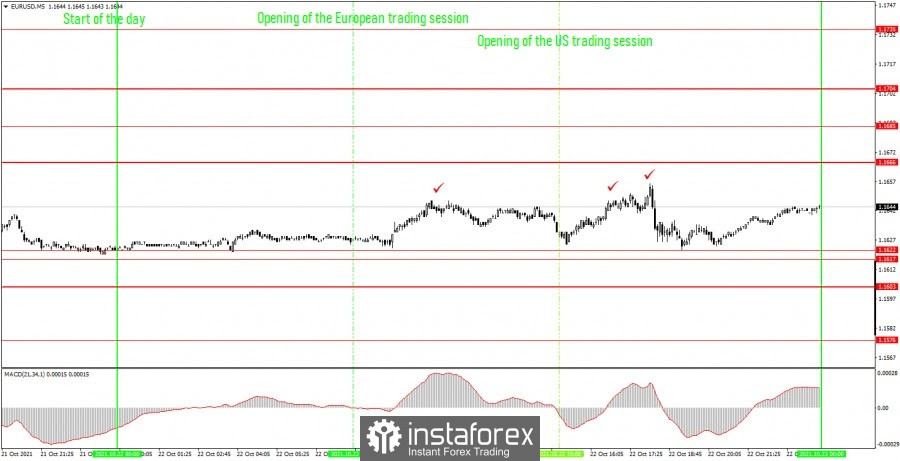 The technical picture is also very eloquent on the 5-minute timeframe. Sideways movement is clearly visible, and Friday's volatility was less than 40 points. Searching for trading signals in a horizontal channel is always very problematic, since they are usually false. Therefore, not only on Friday, but also in the last few days, there were practically none. The same applies to signals from the MACD indicator on the 30-minute timeframe, which there is simply no point in looking for now. Now you can only count on clear signals near the upper or lower borders of the side channel, 54 points wide. But even in this case, there is no guarantee that the pair will be able to move to the opposite border. Thus, no deals were opened on Friday, and perhaps this is for the best. Novice traders did not suffer losses in a blatant flat. Thus, the general trading strategy remains the same: looking for strong signals near the borders of the horizontal channel and waiting for a new upward or downward trend to form.

The pair is trading in a new flat on the 30-minute timeframe, and the volatility still does not exceed 40-50 points per day (in most cases). Thus, it is still very inconvenient to trade on the 30-minute TF, and we still do not recommend tracking signals from the MACD indicator. The key levels on the 5-minute timeframe for October 25 are 1.1603, 1.1617 - 1.1622, 1.1666 and 1.1685. Take Profit, as before, is set at a distance of 30-40 points. Stop Loss - to breakeven when the price passes in the right direction by 15 points. At the 5M TF, the target can be the nearest level if it is not too close or too far away. If it is located - then you should act according to the situation or work according to Take Profit. On Monday, the only more or less important report will be the US consumer confidence indicator. However, if the markets responded with a 20-point move to Powell's speech on Friday, then the likelihood of working out this report is close to zero. We need to wait for more important macroeconomic events. For example, the report on US GDP, which will be published on Wednesday.

Interesting? Write a comment below.
 How to trade EUR/USD on October 25? Simple tips for beginners. The pair remains in a limited sideways range
Forward 
Backward 