How to trade GBP/USD on November 1? Simple tips for beginners. The pound also fell into the abyss on Friday 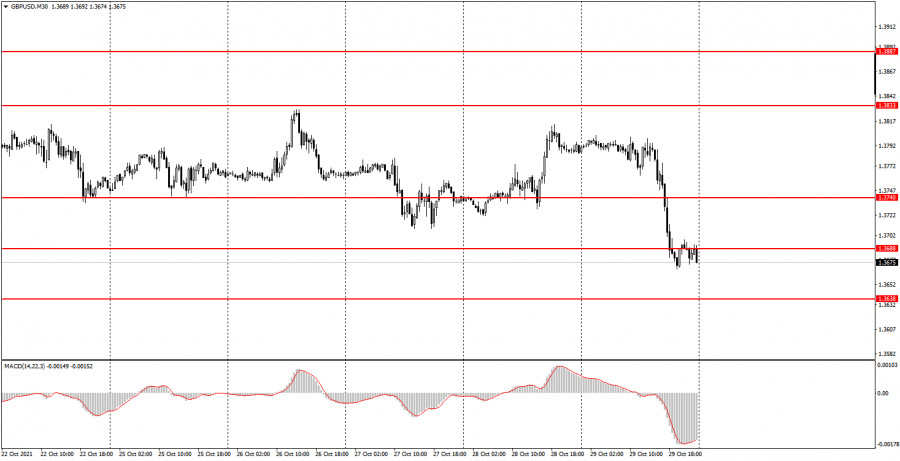 The GBP/USD pair timeframe spent almost nine full days between the levels of 1.3740 and 1.3833 on the 30-minute. That is, in an almost complete horizontal channel. Even Thursday's upward movement, which was triggered by the disastrous US GDP report, did not get the pair out of this channel. Only Friday's fall, which is still unclear what was provoked, allowed quotes to settle below the level of 1.3740, as well as below the level of 1.3688. However, this does not mean at all that a downward trend will now begin to form in the pound/dollar pair. A striking example of this, by the way, is the euro/dollar pair. Even after strong moves on Thursday and Friday, is it really possible to conclude that a trend has begun now? Also in the situation with the pound. One day outside the horizontal channel does not mean that a trend has begun! Thus, we still advise you not to rush into considering trading signals from the MACD indicator. No important statistics were released in America on Friday. At the very least, personal income and expense reports are not important. Nevertheless, it should be admitted that after the publication of these data, the downward movement intensified. Personal spending of Americans rose 0.6%, while income fell 1%. 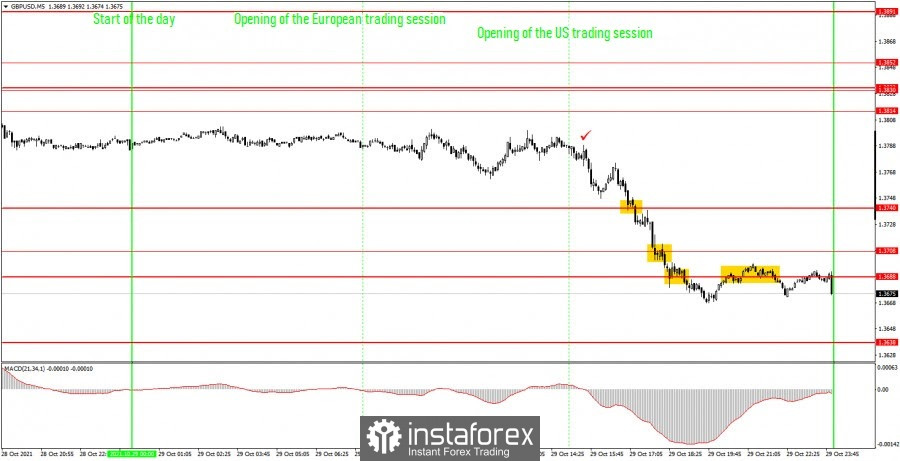 The technical picture on the 5-minute timeframe was twofold on Friday. On the one hand, there is a great downward movement. On the other hand, it started only in the US trading session, and trading signals began to form only in the middle of this session. Thus, traders missed a good half of this movement. Nevertheless, several trading signals were generated and should have been worked out! The first sell signal was formed when the level of 1.3740 was overcome. At this point, short positions should have been opened. The price subsequently broke through the levels of 1.3708 and 1.3688 and went down about 60 points in total. Thus, the trade could and should have been closed at any Take Profit, which, in any case, would have been greater than the profit near any of the exceeded levels. In fact, only one short position was opened on Friday, and it should have brought 40-50 points of profit. Not a bad result. The last sell signal in the form of a rebound from the level of 1.3688 should not have been worked out, as it was formed quite late.

At this time, there is still no trend on the 30-minute timeframe, and volatility has increased only in the last two days. Since there is no trend, we do not advise beginners to follow the signals on the MACD indicator for some time. For these signals to be relevant, a trend movement is required. The important levels on the 5-minute timeframe are 1.3612, 1.3638, 1.3688, 1.3708, 1.3740, 1.3814. We recommend trading on them on Monday. The price can bounce off them or overcome them. As before, we set Take Profit at a distance of 40-50 points. At the 5M TF, you can use all the nearest levels as targets, but then you need to take profit, taking into account the strength of the movement. When passing 20 points in the right direction, we recommend setting Stop Loss to breakeven. On November 1, novice traders can only pay attention to the ISM Manufacturing Index in the US and the UK Manufacturing PMI. The first index, which comes out in the afternoon, will be of greater importance.

Interesting? Write a comment below.
 How to trade GBP/USD on November 1? Simple tips for beginners. The pound also fell into the abyss on Friday
Forward 
Backward 