How to trade GBP/USD on October 25? Simple tips for beginners. The pound is ready to go down 50-100 points 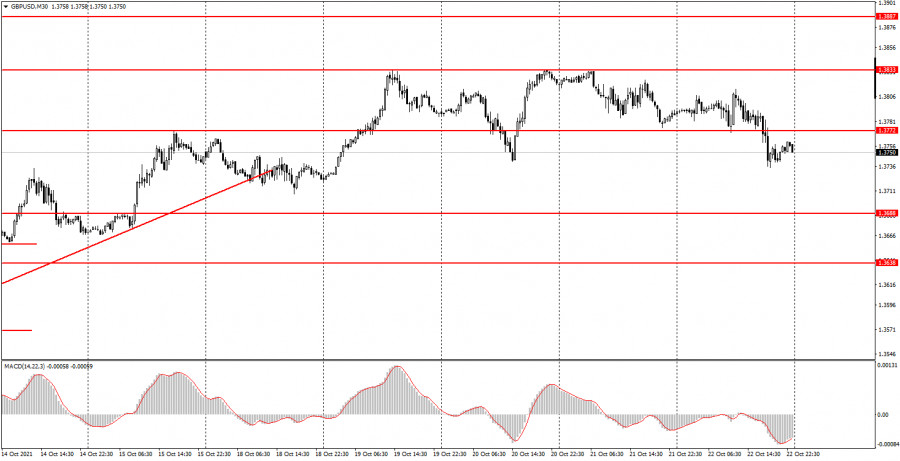 The GBP/USD pair on a 30-minute timeframe traded quite inconveniently again on Friday, especially for novice traders. The first thing you need to pay attention to is that for most of the last week, the pair's quotes were inside the horizontal channel, limited by the levels of 1.3772 and 1.3833. That is, the width of this side channel was only 60 points and, accordingly, the volatility of the pound/dollar pair was also low in most cases. Traders managed to consolidate the pair below the level of 1.3772 only on Friday. However, there can be no talk of any trend right now. At least in the classical sense of the word "trend". There is no trend line or channel, so signals from the MACD indicator should still be ignored. As for the macroeconomic statistics on Friday, the market ignored US reports on business activity. Likewise, data on retail trade in the UK did not have any impact on the course of trading. Only reports on business activity in the services and manufacturing sectors in Britain (the second check in the chart below) provoked a move up by 25 points, as they turned out to be better than forecasted. The markets also reacted to the speech of Federal Reserve Chairman Jerome Powell, who hinted that the QE program could begin to wind down as early as November. After that, the US dollar rose by 30 points. 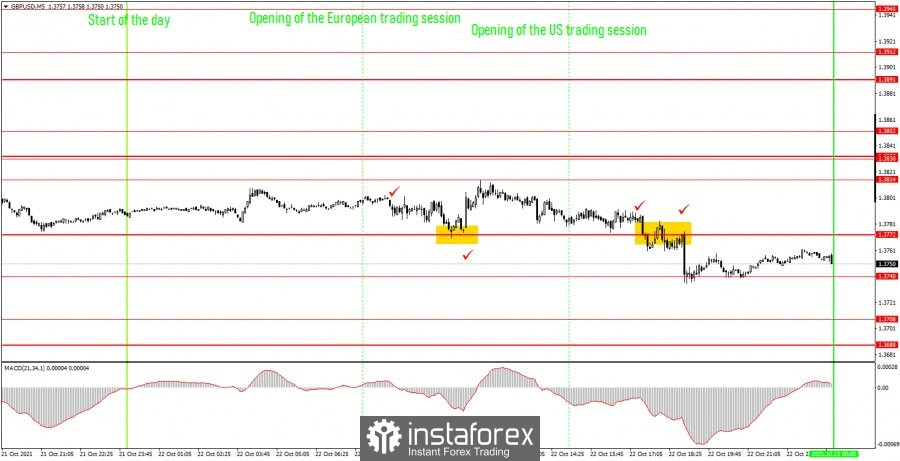 The technical picture on the 5-minute timeframe looks no better than on the 30-minute timeframe. Only two trading signals were generated on Friday, which we will now analyze. All other levels that are not marked with rectangles in the chart above are not relevant, since these levels appeared during Friday itself. Thus, the first buy signal, when the price bounced off the level of 1.3772, could be worked out, but the price was able to go up by only 30 points, which was not enough to trigger the least Take Profit. The deal was closed by Stop Loss, set at breakeven. The next sell signal was formed in the middle of the US trading session, when the price broke the level of 1.3772. In this case, novice traders could sell the pair, but Powell's speech should have started in half an hour, so there was no need to risk it. Nevertheless, those newbies who still opened short positions could earn about 20 points of profit, since trades had to be closed manually in the late afternoon, according to the rules of the intraday trading system. But most traders ended the day with zero profit.

At this time, the upward trend has been cancelled on the 30-minute timeframe, and volatility is low again. Since there is no trend at this time, we do not advise beginners to follow the signals on the MACD indicator for some time. The important levels on the 5-minute timeframe are 1.3708, 1.3740, 1.3772, 1.3814, 1.3830. We recommend trading on them on Tuesday. The price can bounce off them or overcome them. As before, we set Take Profit at a distance of 40-50 points. At the 5M TF, you can use all the nearest levels as targets, but then you need to take profit, taking into account the strength of the movement. When passing 20 points in the right direction, we recommend setting Stop Loss to breakeven. The only highlight of the day on October 25 will be the US consumer confidence report. However, it is unlikely to have a serious impact on the pair's movement.

Interesting? Write a comment below.
 How to trade GBP/USD on October 25? Simple tips for beginners. The pound is ready to go down 50-100 points
Forward 
Backward 