Overview of the EUR/USD pair. October 19. The euro is standing still, but the markets are tired of the "Fed factor" 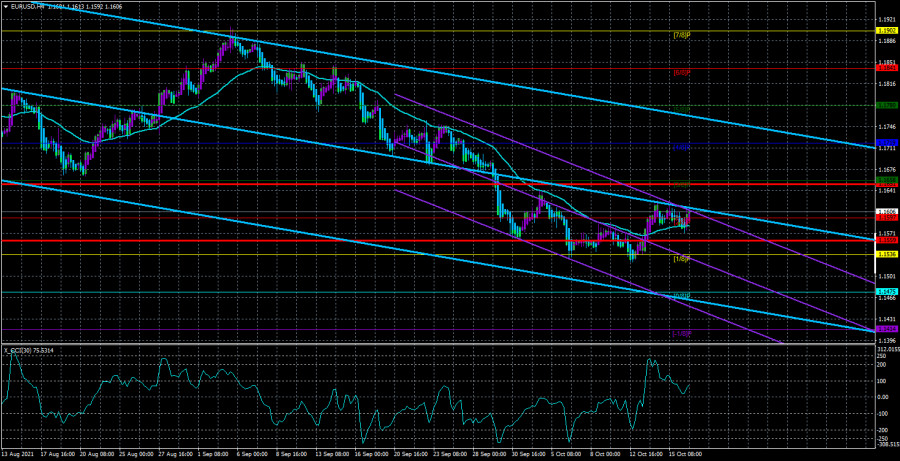 The EUR/USD currency pair did not show anything extraordinary on Monday. Since only one report on American industrial production was scheduled for Monday, it wasn't easy to expect a strong movement when the pair showed nothing in approximately the same situation on Friday. However, 30 points of volatility are even less than nothing. On Monday, the volatility was not much higher, so again, the pair traded very poorly. In recent reviews, we have already said that in the current conditions, it is necessary to trade either on a long-term (that is, on a daily timeframe) or intraday. And even then, signals that can be worked out are not always formed on a 5-minute TF. If a pair passes 30-40 points a day, then even theoretically, how much can you earn on this? Let's say it will pass about 10 points at night, and there are 20-30 points in the daytime.

Naturally, no trader will catch the movement at its very beginning and will not exit it at the very end. Thus, 10 points of profit are the maximum that is currently available to market participants. And this is also provided that there will not be a single false signal during the day. And in the flat, as we know, false signals are formed. As for the technical picture on the 4-hour TF according to the "Linear Regression Channels" system, you can only use the moving average line as a guide and as a signal source. The Heiken Ashi indicator changes direction too often after too weak movements. It is also important to deal with the question of when to expect a recovery in volatility.

And this is the most difficult issue right now. The pound/dollar pair seems to have gained momentum in the last few weeks and at least passes 80-100 points a day. It is not much for the pound, but it is enough to count on good signals and profit formation. But the European currency is in one place, so it is extremely difficult to expect profits from trading on it. We assume that the market should feel some push from the outside to start trading the pair more actively again. What is most interesting - COT reports do not indicate a sharp decline in the volume of long and short euro contracts. The reason for such a strong drop in the activity is a mystery. Hopes are all connected with the most important topic of the current time - the Fed's QE program. On this topic, however, so much has already been said that it has already bored everyone. After all, absolutely nothing changes. Representatives of the Fed board continue to talk out loud about when it will be most appropriate to start curtailing QE. Moreover, opinions were divided within the monetary committee, so there are no guarantees that the American economy will receive fewer cash injections from November. Furthermore, the Fed is now facing several dilemmas at once, and most likely it is because of them that Jerome Powell has so far refused to support James Bullard, Rafael Bostic, and other supporters of the early curtailment of the stimulus program.

The fact is that the labor market is starting to slow down its recovery, and the QE program is still needed. But at the same time, inflation continues to rise, and prices in the States are growing very strongly. However, since they are increasing for expensive goods, this growth is poorly reflected in the final inflation. Inflation is now 5.4%, and apartments, electricity, fuel, cars have increased in price by 25% or more. At the same time, if we start to wind down QE, it may not decrease inflation, as expected. The consumer price index has already accelerated, and now prices will rise by inertia. But the labor market may slow down even more without additional cash injections. In addition, any tightening may lead to an increase in the US dollar, which is unnecessary for the Treasury and the Fed, as this will greatly increase the cost of servicing the US government debt and an increase in the yield of treasuries. 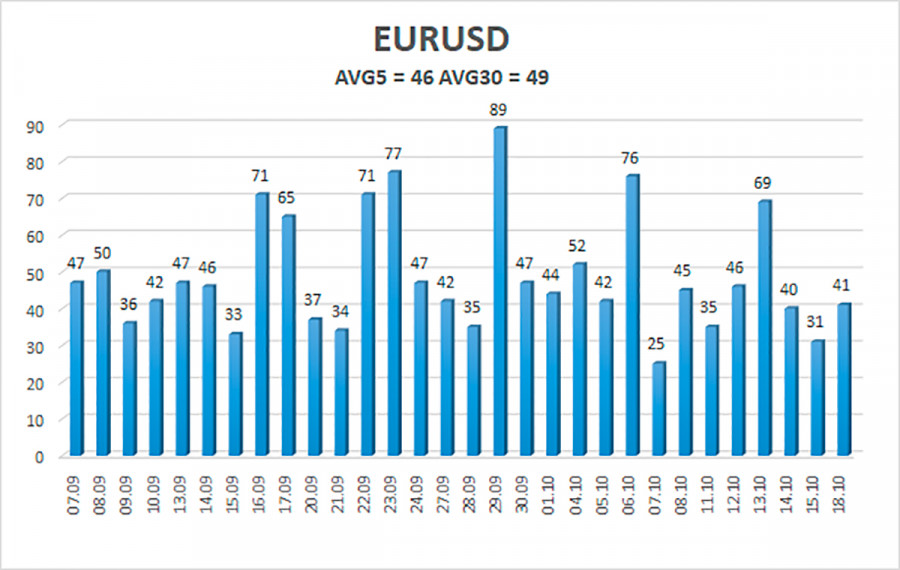 The volatility of the euro/dollar currency pair as of October 19 is 46 points and is characterized as "low." Thus, we expect the pair to move today between the levels of 1.1559 and 1.1651. The reversal of the Heiken Ashi indicator downwards signals a new round of downward movement.

Interesting? Write a comment below.
 but the markets are tired of the "Fed factor", Overview of the EUR/USD pair. October 19. The euro is standing still
Forward 
Backward 