Overview of the EUR/USD pair. October 20. Janet Yellen once again urged Congress not to delay raising the debt limit 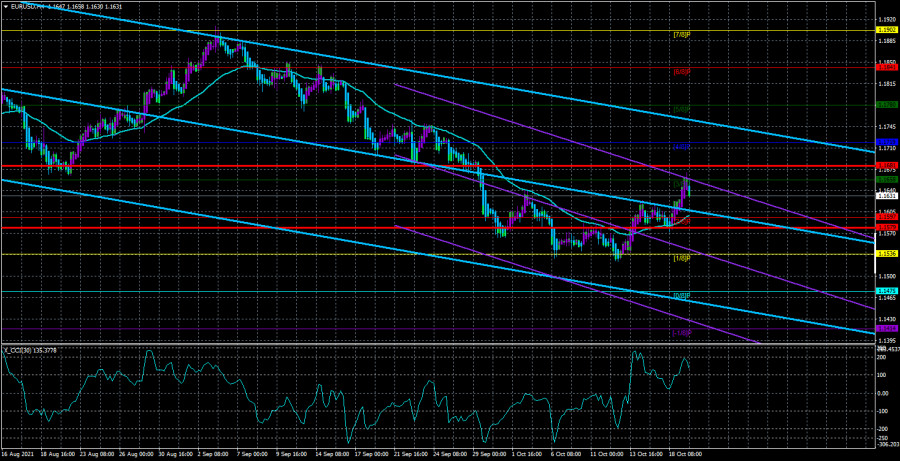 The EUR/USD currency pair continued to move calmly on Tuesday but already more actively than in the previous few days. However, we have already talked about this many times, and the illustration below shows it perfectly: the pair spends 4 out of 5 trading days with a volatility of about 40 points and then gives out one day with a volatility of 70-80 points, which provides an average value of about 50 points. And, in most cases, the volatility does not exceed 40 points, which is very little. Yesterday was just "one of five" when volatility was higher. We draw attention to the fact that there were no grounds for an increase in volatility on Tuesday. No macroeconomic reports were scheduled for this day either in the European Union or in the States. Several speeches by members of the Fed monetary committee were to take place in America. However, they were to take place in the evening anyway, and the pair's movement began at night and lasted most of the day. We also note that the euro/dollar pair continues its upward movement, which is more logical than a drop in quotes. We believe that the markets have become disillusioned with the rhetoric of the Fed and its members, who have been beating around the bush for several months about the decision to wind down the QE program. But at the moment, no decision has been made, and no specifics have been presented. Therefore, the US dollar, which has been growing for almost a month and a half on this expectation of the markets alone, has lost faith in itself at this time and is falling against the euro and the pound. From a technical point of view, both linear regression channels are still directed downward. However, if the northward movement persists for another week or two, the channels will begin to turn upward. In principle, the next important event that can dramatically affect the pair's movement will be the Fed meeting, which will be held on November 3.

Meanwhile, US Treasury Secretary Janet Yellen again urged Congress not to delay raising the debt limit or freezing it for a year or two. Recall that a week ago, the Senate and the House of Representatives of Congress approved an increase in the national debt limit by $ 480 billion. We have made a temporary solution to this problem. And this money will be enough until the beginning of December. Accordingly, Republicans and Democrats need to sit down at the negotiating table again and decide what conditions both parties will vote for increasing the government borrowing limit. Recall also that at the moment, there is an unresolved issue with Joe Biden's "infrastructure" package, as well as with the "social" package, which involves spending about $ 5 trillion. Republicans categorically disagree with such amounts, who believe that Democrats spend too much and do not provide any plan for debt repayment. Even if there is no reason to argue, they will still do it. Returning to Janet Yellen and her next call to raise the limit, the situation is still the same. Republicans believe that Democrats will finance their "infrastructure" and "social" packages by raising the limit and refusing to vote for its increase. It is also possible to raise the limit without their approval, but the Democrats do not want to resort to this extreme method yet, as they want the agreement to be bipartisan. In general, in the near future in America, all attention will again be focused on the Fed and Congress. It is there that the future fate of the American economy and the US dollar will be decided.

The dollar is not yet reacting too zealously to all these events with the national debt limit. It can react to them through specific actions of market participants. Therefore, it would be correct to say that market participants are not worried about the limit and Joe Biden's two packages. In principle, this is true since the debt limit has been raised 100 times over the past 100 years. 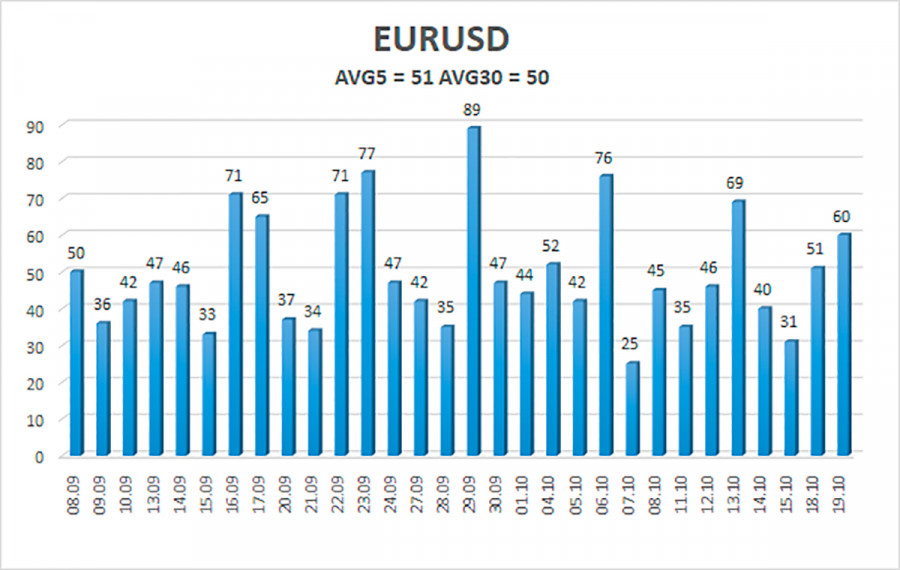 The volatility of the euro/dollar currency pair as of October 20 is 51 points and is characterized as "average." Thus, we expect the pair to move today between the levels of 1.1579 and 1.1681. The reversal of the Heiken Ashi indicator downwards signals a new round of downward movement.

The EUR/USD pair continues to be located above the moving average line, so the trend remains upward, and volatility is low. Thus, today we can consider new long positions with targets of 1.1651 and 1.1681 after the downward pullback ends and the Heiken Ashi indicator turns upward. Pair sales should be opened if the price is fixed below the moving target of 1.1536.