Overview of the EUR/USD pair. October 22. High inflation in the US is "temporary" 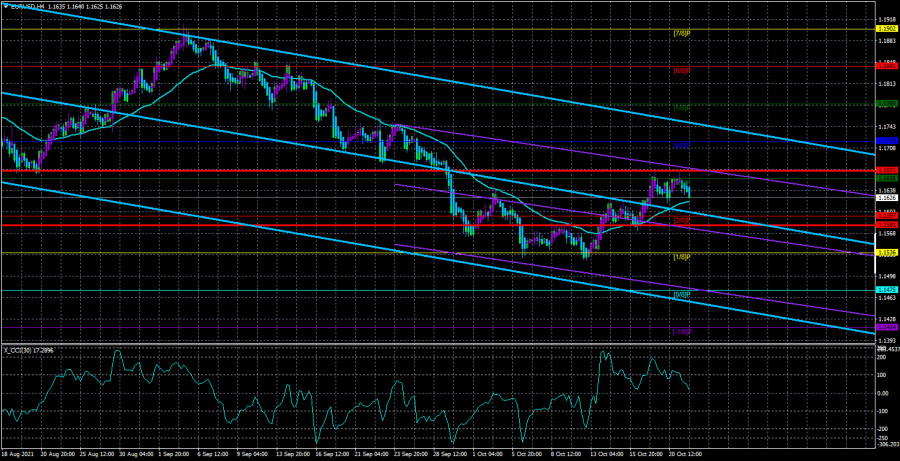 The EUR/USD currency pair continued indistinct trading on Thursday. We have already drawn traders' attention to the fact that it does not matter whether there are macroeconomic statistics or not. In the absolute majority of cases, the volatility of the euro/dollar pair remains extremely low. For example, in the illustration above, we see an upward trend that started ten days ago. During this time, the pair went up - 120 points. 120 points in 8 trading days.

Moreover, the price did not go up 300 points and then dropped by 180. No, this is all the movement in the last eight trading days. Thus, even this example clearly shows that even if traders had opened long positions ten days ago and had not closed them all this time, they would have earned a maximum of 100 points, although this was the entire movement of the pair during this period. In general, as they say, comments are unnecessary. Thus, from a technical point of view, we still have an upward trend and a "mind-blowing" upward movement. Both linear regression channels are still directed downwards, which makes it possible for bears to start creating pressure on the euro at any moment and resume the downward trend. However, long positions should be considered before fixing the price below the moving average. If we talk about the macroeconomic background, then there's nothing to talk about. Even the markets manage to ignore rare important publications. They do not influence the movement of the pair now. Even volatility does not increase. As for the fundamental background, the US dollar ignored the following:

Thus, there is no reason to expect that at this time, the markets will suddenly start reacting to the statements of Rafael Bostic or James Bullard.

Moreover, the situation regarding the coronavirus pandemic is now beginning to escalate again around the world. The number of diseases is growing in European countries, and several countries have already introduced "lockdowns." In America, the number of deaths from the "coronavirus" is growing, and a new strain has also been found, which is a subspecies of the "delta strain." Thus, in the near future, both the American and European economies may face another slowdown. Or they will require an extension of the term of the incentive measures. Both are not included in the plans of central banks, which so far have unanimously declared that high inflation is temporary. Monetary policy will slowly begin to tighten in the coming months. Naturally, we are talking only about quantitative stimulus programs: QE and PEPP. However, the markets are already tired of waiting for concrete actions from the Fed and the ECB.

Moreover, to a greater extent, it concerns the Fed. In the United States, inflation has already jumped to 5.4%, and it is only 3.4% in the European Union. Thus, it is not for nothing that American investors are sounding the alarm, who see their money depreciating. Therefore, stock indices and bitcoin continue to grow, as they are now the best means of hedging inflation. And in any case, the Fed continues to print $ 120 billion a month, which is sent to the economy, inflating its money supply even more. Thus, it was from the Fed that traders were waiting for the curtailment of the QE program back in September, and now they are waiting for its curtailment in November. But so far, none of the Fed members has stated in plain text that such a decision will be made at the next meeting. Therefore, it is far from the fact that such a decision will be made. Consequently, the US dollar received advances from traders too early, when it grew almost recoilless for a month and a half. However, at this time, it is not in a hurry to fall in pair with the euro, unlike the pound/dollar pair. 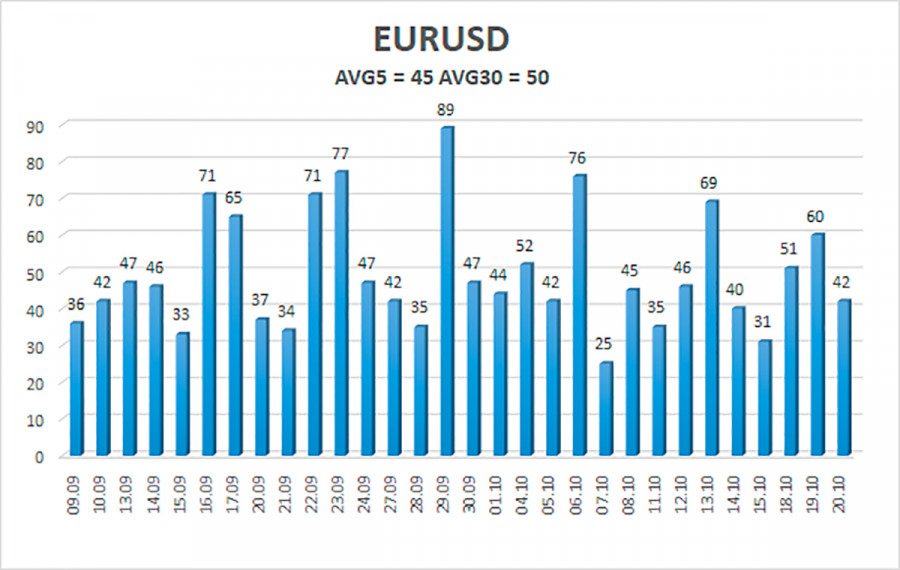 The volatility of the euro/dollar currency pair as of October 22 is 45 points and is characterized as "low." Thus, we expect the pair to move today between the levels of 1.1581 and 1.1671. A reversal of the Heiken Ashi indicator upwards will signal a possible resumption of the upward movement.

The EUR/USD pair continues to be located above the moving average line, so the trend remains upward, and volatility is low. Thus, today we can consider new long positions with targets of 1.1658 and 1.1671 after the downward pullback ends and the Heiken Ashi indicator turns upward. Pair sales should be opened if the price is fixed below the moving target of 1.1536.

Interesting? Write a comment below.
 Overview of the EUR/USD pair. October 22. High inflation in the US is "temporary"
Forward 
Backward 