Overview of the EUR/USD pair. October 25. Jerome Powell did not help the dollar and did not give specifics to the markets.

The EUR/USD currency pair continued indistinct movements on Friday. We have already said many times in recent months that the pair's movement's volatility and nature remain relatively weak and doubtful. The pair continues to trade very sluggishly, so the distances it passes in a day do not allow profit to trade. Thus, you either need to use the lowest timeframes or, on the contrary, increase the life of one transaction to several days. In principle, the illustration above clearly shows that the Heiken Ashi indicator changes the direction of movement very often. However, at the same time, the distances it passes between changes of direction are extremely small. At the end of last week, traders failed to overcome the Murray level of "3/8" - 1.1658 but could not gain a foothold below the moving average line. Thus, there is no reason to expect a resumption of the downward trend now. However, the upward movement will not be able to continue unless the level of 1.1658 is overcome. Therefore, you need to wait for either overcoming the level or moving before opening new positions.

At the same time, the fundamental background for the pair remains quite contradictory. On the one hand, macroeconomic statistics are regularly published. Moreover, Jerome Powell, other Fed representatives, and Christine Lagarde regularly make speeches. But all this does not affect the movement of the pair itself in any way. A vivid confirmation of this is the speech of Jerome Powell on Friday, after which the US dollar rose by 20 points. If such a movement can be called a "reaction," then all important fundamental and macroeconomic events can not be tracked since they do not affect the overall technical picture, and it will not be possible to make money on the movements after them.

Nevertheless, there is a general fundamental background. And it is now expressed only by the market's attitude to the Fed and its attempts to curtail the quantitative stimulus program. On Friday, the head of the Fed made several important statements about monetary policy. For example, Jerome Powell said that economic growth in the third quarter slowed down significantly due to a new pandemic outbreak, which forced Americans to leave their homes at a minimum, visit restaurants and cafes, and buy various goods. Nevertheless, inflation in the States continues to rise. Therefore, Powell believes that the Fed will intervene if this growth continues further. And at the same time, Powell said that inflation is likely to remain high next year. He noted that the supply problems had not gone away, and the situation with the "coronavirus" can create additional problems for the economy at any time. Under such conditions, it is very difficult to predict anything, Powell believes.

Nevertheless, by the middle of next year, it is expected that the Fed will curtail the quantitative stimulus program, which now amounts to $ 120 billion per month. Recall that opinions regarding the timing of the curtailment of the QE program within the Fed itself were divided. Part of the board believes that it should be completed already in November. Part believes it should wait at least December. Thus, on November 3, we will find out which wing of the Fed won: "hawkish" or "dovish."

What conclusions can be drawn from Powell's speech? First, Jerome again did not report anything specific. Of course, specifics rarely come from the head of the Fed if the speech does not take place immediately after the central bank meeting. Nevertheless, the markets are waiting for information, but they do not receive it. Second, it is still unclear when the quantitative stimulus program will be completed. And this issue is very important for the prospects of the US currency. At the same time, one can understand Powell himself. A huge public debt has been formed in the States, and an increase in the exchange rate of the US currency will complicate the procedure for servicing it.

Moreover, any tightening of monetary policy can also provoke a rise in the US currency price. Thus, Powell is trying his best not to "muddy the waters" and not provoke the growth of the dollar ahead of time. Moreover, the curtailment of QE may already be embedded in the current exchange rate of the US currency. Thus, the markets can only wait for specifics. Given the almost recoilless growth of the dollar against the euro in the last month and a half, the curtailment of QE can indeed already be taken into account by the markets. 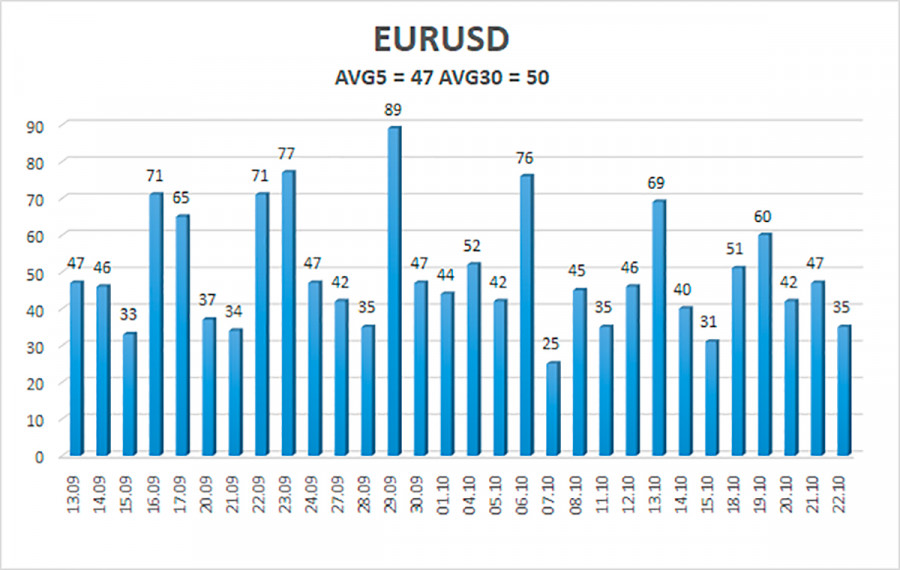 The volatility of the euro/dollar currency pair as of October 25 is 47 points and is characterized as "low." Thus, we expect the pair to move today between the levels of 1.1597 and 1.1691. A reversal of the Heiken Ashi indicator upwards will signal a possible resumption of the downward movement.

The EUR/USD pair continues to be located above the moving average line, so the trend remains upward, and volatility is low. Thus, today, we can consider new long positions with targets of 1.1658 and 1.1691 after the downward pullback ends and the Heiken Ashi indicator turns upward. Pair sales should be opened if the price is fixed below the moving average with targets of 1.1597 and 1.1536.

Interesting? Write a comment below.
 Overview of the EUR/USD pair. October 25. Jerome Powell did not help the dollar and did not give specifics to the markets.
Forward 
Backward 