Overview of the EUR/USD pair. October 26. Traders are starting to believe again in the curtailment of QE in November 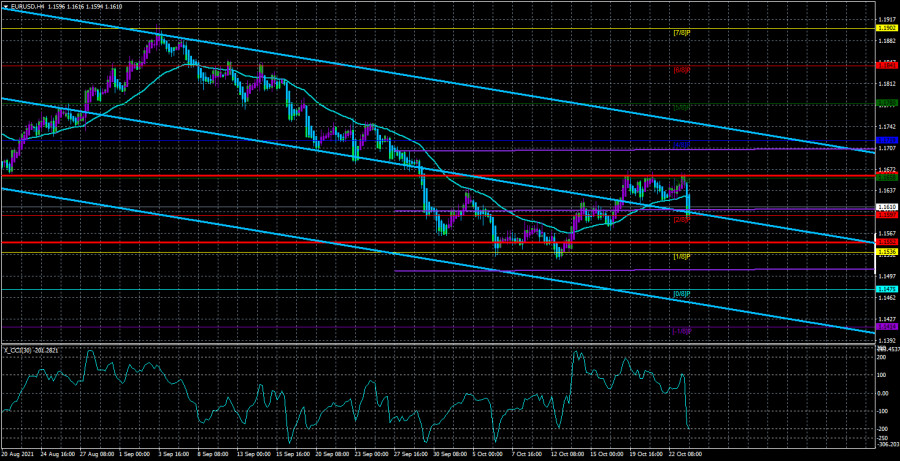 The EUR/USD currency pair collapsed on Monday for no reason at all. Of course, the expression "collapsed" is not entirely correct since volatility was again low. Nevertheless, the pair has passed more than 60 points, which is already an achievement for it. We also note that after three unsuccessful attempts to overcome the Murray level of "3/8" - 1.1658, a downward movement began and the price consolidated below the moving average line. Thus, the trend has changed to a downward one, and short positions should be considered again. Also, note that none of the linear regression channels is currently directed upwards, so we can conclude that the strengthening of the euro that we have observed in recent weeks has failed to change the general mood of the market. The US currency gets a new opportunity to strengthen its position, which still looks very strange from fundamental analysis. Recall that very contradictory news has been coming from the States lately. The markets have been preparing for the curtailment of the quantitative stimulus program for several months, but they can't wait for it. Jerome Powell and other Fed members regularly make speeches or give interviews in which they show their willingness to vote for a reduction in QE volumes as early as November. However, so far, this remains at the level of conversations. But recently, statements about inflation and the fact that it can be at a high level for much longer than originally planned have begun to appear more and more often. Recall that nothing is surprising in high inflation since the Fed has been pouring huge sums into the American economy for a year and a half, which cannot but lead to an increase in prices. In recent months, top US officials have repeatedly stated that inflation is temporary. However, their rhetoric has recently changed to "inflation may remain high for longer than previously assumed." It means that the Fed's leadership cannot control the consumer price index yet.

Recall also that the Fed is now in some way trapped. On the one hand, the QE program supports the labor market's recovery, which has begun to slow down in the last two months anyway, and without QE, it can slow down even faster. On the other hand, if we continue to pour $ 120 billion into the economy every month, it would be naive to believe that inflation will begin to decline by itself. It probably explains the ultra-soft rhetoric of Jerome Powell. Other members of the Fed are much more openly declaring that it's time to curtail stimulus, but no one explains how the labor market will behave in this case? James Bullard believes that the labor market will recover even without $ 120 billion a month. Moreover, the QE program will be phased out gradually until the middle of next year. At least according to the Fed's current plans.

In general, there are a lot of questions to the Fed now, and the US dollar may resume its growth against the background of new expectations of traders about the end of QE in November. Recall that on November 3, the results of the next meeting of the regulator will be summed up. It should become clear whether the rejection of incentives will begin or whether the markets will have to wait until December? Given that the dollar has been strengthening in the last two months, paired with the euro, it can be assumed that the markets are also waiting for a reduction in QE. But this is a double-edged sword since the current exchange rate of the pair may reflect a future reduction in incentives. Therefore, when this moment comes, the US dollar may not continue to grow but, on the contrary, begin to fall. We also remind you that the pound/dollar and euro/dollar pairs have moved differently recently. Of course, such uncorrelation is a rare phenomenon. However, it is quite strange now that there is no important fundamental background in the UK. 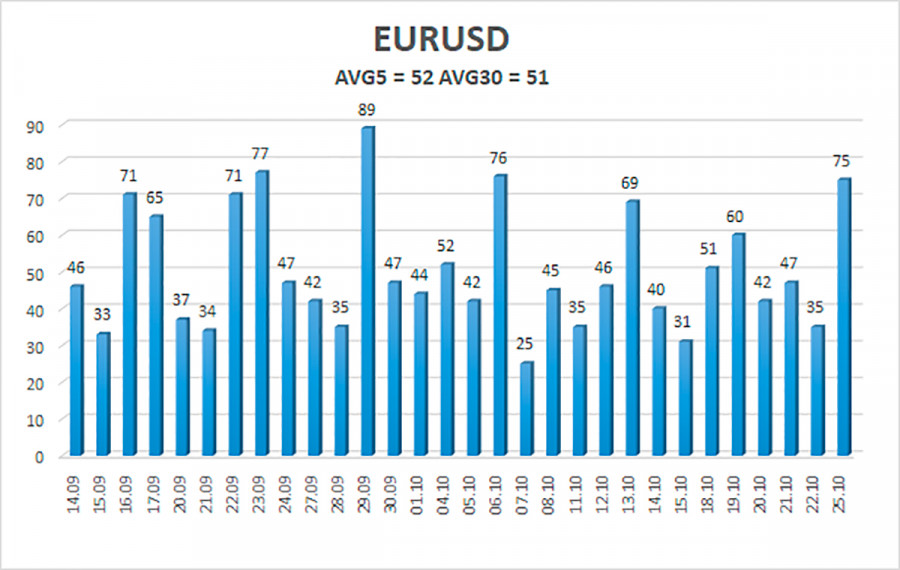 The volatility of the euro/dollar currency pair as of October 26 is 52 points and is characterized as "average." Thus, we expect the pair to move today between the levels of 1.1552 and 1.1662. A reversal of the Heiken Ashi indicator upwards will signal a possible resumption of the upward movement.

Interesting? Write a comment below.
 Overview of the EUR/USD pair. October 26. Traders are starting to believe again in the curtailment of QE in November
Forward 
Backward 