Overview of the EUR/USD pair. October 28. What to expect from the ECB meeting? 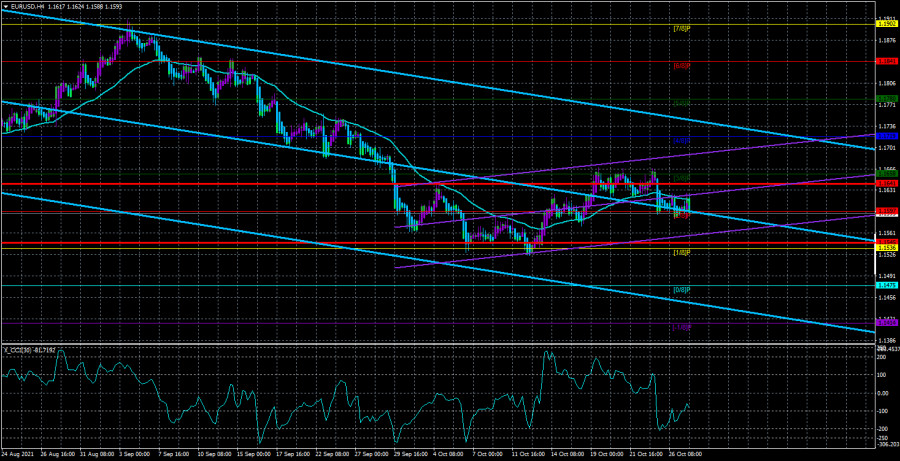 The EUR/USD currency pair on Wednesday continued to trade calmly. Over the past few months, market participants have found reasons to trade the pair more or less actively only a few times, which is seen in the illustration below. Only once in the last thirty working days has the volatility exceeded 80 points. And only five times – 70 points. And this is although a year ago, it was considered normal if the euro/dollar pair passed 60-80 points per day. But times are changing. Moreover, now the pound/dollar pair is also trading with reduced volatility. Thus, we are even beginning to get used to weak volatility, and it is very difficult to answer the question of when everything will return to its place. Traders ignore even such important events like meetings of central banks. And what could be more important than that? Of course, in recent months and even a year, central banks have hardly changed their ultra-soft monetary policies. Therefore, we can even conclude that traders simply have nothing to react to. At the same time, before the crisis, monetary policy also changed infrequently, nevertheless, the markets traded actively. In general, this question remains open.

On Wednesday, the pair's quotes remained below the moving average line. However, this consolidation is so shallow that at any moment the price may go back above the moving average. One channel of linear regression is directed downwards, the second one is directed upwards. Therefore, the trend is not exactly absent now. It is fuzzy and implicit. Bulls failed to overcome the level of Murray "3/8", bears - the level of Murray "2/8". If you look at the 24-hour timeframe (we talked about this at the weekend), it becomes clear that the pair failed to gain a foothold above the critical line, so at this time, there is still a little more chance of continuing the downward movement. However, the markets seem to be already waiting for the ECB meeting, which will take place today, and they do not know why they are waiting.

No one expects any action from the ECB now. At the last meeting, Christine Lagarde already announced that in the last months of the outgoing year, the volume of asset purchases will be reduced. However, in the future, monetary stimulus is unlikely to become much less than it is now. The same Lagarde has already stated that the PEPP program may decrease, but at the same time, the standard APP program will expand. Thus, today, everything will depend on what kind of rhetoric the head of the ECB will adhere to. And here, I must say, there are also unlikely to be surprises. There is simply no reason for this. If in the United States everything boils down to the recovery of the labor market and inflation, then in the European Union, no one talks about the labor market, and inflation there is not so high. Thus, Christine Lagarde's rhetoric is likely to remain soft, which means there will be no surprises. Nevertheless, this is an ECB meeting, so no one knows what and how it may turn out. In any case, you need to be ready.

The markets can be said to expect the ECB to also raise rates next year. However, if representatives of the Fed are very fond of speaking in public and giving interviews, then representatives of the ECB do this infrequently, and they prefer to talk about future changes in monetary policy only after meetings. Nevertheless, there is an opinion that the ECB may raise the rate by 0.1% next year, but these are just guesses and expectations. The same applies to the PEPP program. It should be completed by the end of March 2022, but nothing prevents the ECB from extending its validity, given the most favorable situation in the European Union with the "coronavirus". Recently, the topic of the pandemic has come to the fore again, because several European countries have already introduced a "lockdown", as the number of diseases is growing again, despite the vaccination process. Thus, we are more likely to see a deterioration in economic forecasts, but there will be a few reasons for the "hawkish" rhetoric. 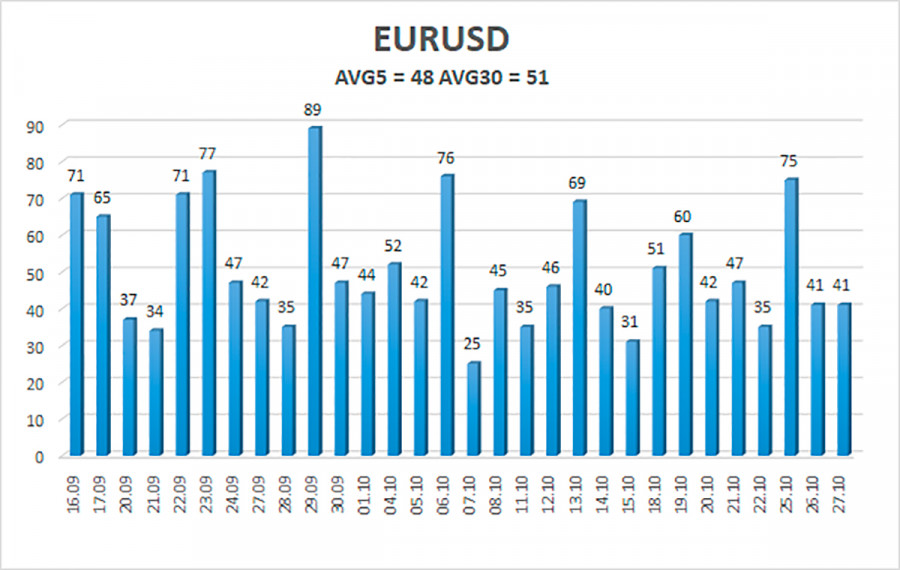 The volatility of the euro/dollar currency pair as of October 28 is 48 points and is characterized as "average". Thus, we expect the pair to move today between the levels of 1.1545 and 1.1641. A reversal of the Heiken Ashi indicator upwards will signal a possible resumption of the upward movement.

Interesting? Write a comment below.
 Overview of the EUR/USD pair. October 28. What to expect from the ECB meeting?
Forward 
Backward 