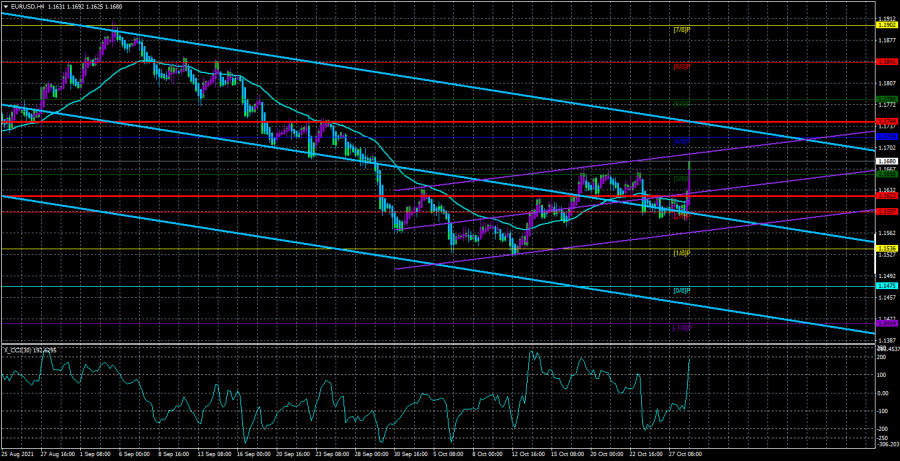 The EUR/USD currency pair traded quite actively on Thursday, which was expected from it. The fact is that the results of the ECB meeting were summed up yesterday, which always arouses the interest of the markets. Thus, the increase in volatility should not cause any surprise. However, we will talk about the results of the ECB meeting a little below. For now, I would like to note that the technical picture has not changed much over the past day. The euro/dollar pair gained a foothold above the moving average line. However, this did not change the essence of the matter, since the bears could not develop their success after three days spent under moving. They could not even break through the 16th level. Thus, a new round of strengthening of the US currency is postponed for now. Of course, this does not mean that the US dollar will not resume its growth next week when the results of the Fed meeting are summed up. After all, the Fed may announce the curtailment of the QE program, which the markets have been waiting for. However, the upward movement has resumed at this time. Recall also that on the 24-hour timeframe, the price has been trying to overcome the Kijun-sen line for more than a week, which is the first bulwark on the pair's path to a new upward trend. Yesterday, we managed to overcome this line. Thus, now the upward movement can continue to the Senkou Span B line (1.1786). We also recall that we have been expecting a resumption of the global upward trend for a long time since the long-term prospects of the US currency remain very vague. Although the American economy has recovered very well over the past year, it should be understood that this growth was provided by the Fed's printing press. Naturally, with such cash injections, the economy recovered quickly. However, a new blow from the "coronavirus" has already collapsed GDP in the third quarter to 2%.

As for the ECB meeting, the European regulator has not taken any concrete actions. The key rate remained unchanged, as did the volumes of the PEPP and APP programs. However, the ECB made it clear that in the fourth quarter, the volume of asset purchases under the PEPP program will decrease compared to the second and third quarters. There are different ways to treat this statement since Christine Lagarde has previously stated that with the completion of the PEPP program, the APP program will be increased. The only question is how much the total volume of asset purchases will decrease. It should decrease with the completion of the PEPP program in March next year. And this can support the euro. However, the Fed may also begin to wind down its QE program, which in some way negates the advantage of the euro. Returning to Christine Lagarde, she said at a press conference that inflation will remain high for a long period. It is worth noting that the markets were waiting for words about inflation, although it is not as high in the European Union as in the United States. Nevertheless, Lagarde noted the increase in prices and stated that the increase in energy prices provokes an increase in inflation for almost all goods and services. In addition, she noted that demand is recovering faster than supply, which causes a shortage of some goods and an increase in prices. "We expect further inflation growth in the medium term, and then its slowdown over the next year," said the head of the ECB on Thursday. Lagarde also noted that the pace of economic recovery is declining, which may be caused by new outbreaks of the epidemic, as well as new strains of coronavirus, which have already forced several European countries to introduce a lockdown.

After all this information, the European currency rose by 100 points, probably reacting only to the words about the reduction of PEPP volumes. In general, the ECB meeting can be called quite "passing". Previously, the markets have repeatedly ignored such results. However, it was very important for the European currency to start trading more actively. Recall that in the last few months, the pair has been experiencing very serious problems with volatility. Perhaps yesterday will be the starting point for a new period with higher volatility. Also, note that the euro currency could partly grow due to the weak US GDP report.

The volatility of the euro/dollar currency pair as of October 29 is 61 points and is characterized as "average". Thus, we expect the pair to move today between the levels of 1.1622 and 1.1744. The reversal of the Heiken Ashi indicator downwards signals a round of downward correction after yesterday's growth.