Overview of the EUR/USD pair. October 5. The markets are tired of words and are waiting for concrete actions from the Central 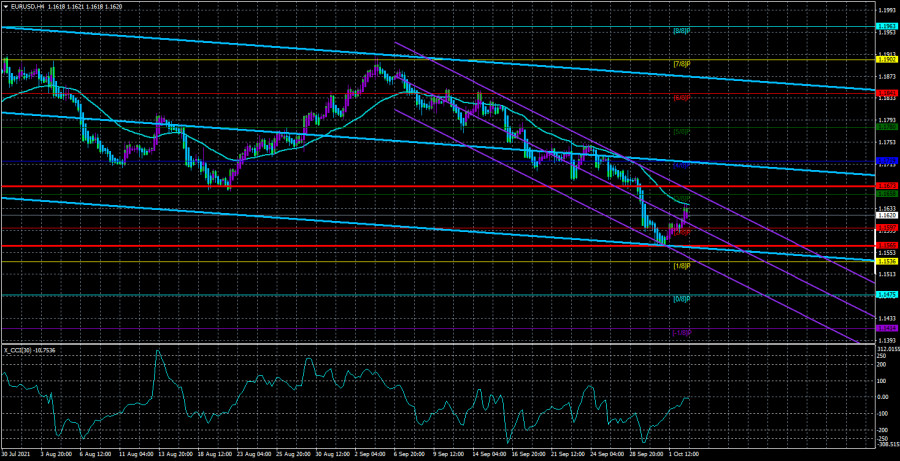 The EUR/USD currency pair has started a new week in an upward movement. It cannot be said that volatility has increased, and the pair itself has begun a powerful correction. No, the same unhurried movement that has been observed for several months continues. The average volatility is still 40-50 points per day, which seems to be quite enough for the markets. Quotes continue to be in a downward trend, but it is quite fragile and unstable. We have already said earlier that such unhurried one-way traffic turns out to be long. However, at this time, the fundamental background is such that it is very difficult to imagine further growth of the US dollar. The US currency has no tangible support for the "foundation" or "macroeconomics." The whole fundamental background now boils down to the fact that the markets are waiting for which of the central banks will be the first to announce the curtailment of the quantitative stimulus program? Although this has already happened since Christine Lagarde announced not so long ago that in the third and fourth quarters of 2021, the volume of asset purchases will be smaller than in the first and second. The ECB has already moved to curtail QE. But the Fed continues to buy securities and bonds worth at least $ 120 billion a month. And in the best case, it will begin to reduce the volume of this program in November, after the next Fed meeting.

Nevertheless, the US dollar has been growing for more than a month, as markets are waiting for the Fed to start canceling incentives. What used to play against the dollar is now playing for it. Previously, they got rid of the dollar since the Fed's QE program was much stronger than the ECB's PEPP program. Now, the dollar is receiving market support on expectations of the curtailment of a larger quantitative stimulus program. To put it simply, after the Fed announces the beginning of the curtailment of QE, cash flows into the American economy will begin to decrease. Accordingly, the imbalance between the money supply of the Eurozone and the United States will begin to decline. Consequently, the dollar may rise in price on the same factor it fell in the last year and a half.

However, all this is very obvious since the money supply in the United States has swollen to unimaginable proportions over the past year and a half anyway. And no one is going to withdraw the "extra" money from the economy. Consequently, the gap between the money supply of the United States and the European Union will not begin to decrease in the truest sense of the word. Only the growth rate of the gap between the EU and the US money supply volumes will decrease. And this is a rather controversial factor in supporting the US dollar. Thus, from our point of view, there is no real support for the dollar at this time. Globally, the euro/dollar pair continues to adjust against the upward trend. And even the last drop to the level of 1.1550 does not change the overall picture of what is happening. We all also have a classic 3-wave correction at our disposal, which can be completed at any time. And if so, then the long-term upward trend can also resume at any moment. Moreover, the global correction has been going on for nine months.

What can change the mood of the markets? No matter how banal it may sound, but we should wait for the bears to get enough and the bulls to return to the market again. If the Fed announced the immediate curtailment of QE right today, this could play a significant role in further strengthening the US currency. However, as we have already said, it was the ECB that first started reducing monetary stimulus. Therefore, if anyone is going to grow now, it is the European currency. Thus, it is now recommended to pay the greatest attention to technical analysis and trend identification. At the moment, it remains descending, as evidenced by both the moving and both linear regression channels. However, the price is constantly very close to the moving average line. Thus, an upward reversal can occur at any time. Moreover, there are no global events and topics on the horizon that could support the demand for the dollar. 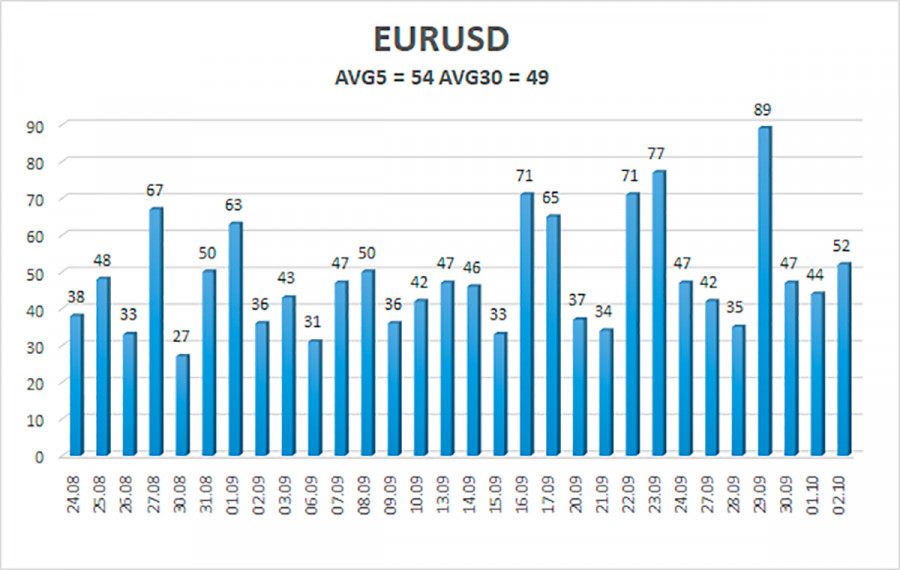 The volatility of the euro/dollar currency pair as of October 5 is 54 points and is characterized as "average." Thus, we expect the pair to move today between the levels of 1.1565 and 1.1673. The reversal of the Heiken Ashi indicator back down will signal the resumption of the downward movement.

The EUR/USD pair continues a slight upward correction. Thus, today, we should consider new options for opening short positions with targets of 1.1565 and 1.1536 in the event of a price rebound from the moving average line. Purchases of the pair should be opened if the price is fixed above the moving average with targets of 1.1673 and 1.1719. They should be kept open until the Heiken Ashi indicator turns down.

Interesting? Write a comment below.
 Overview of the EUR/USD pair. October 5. The markets are tired of words and are waiting for concrete actions from the Central
Forward 
Backward 