Overview of the EUR/USD pair. October 8. Is the world on the verge of another financial crisis? 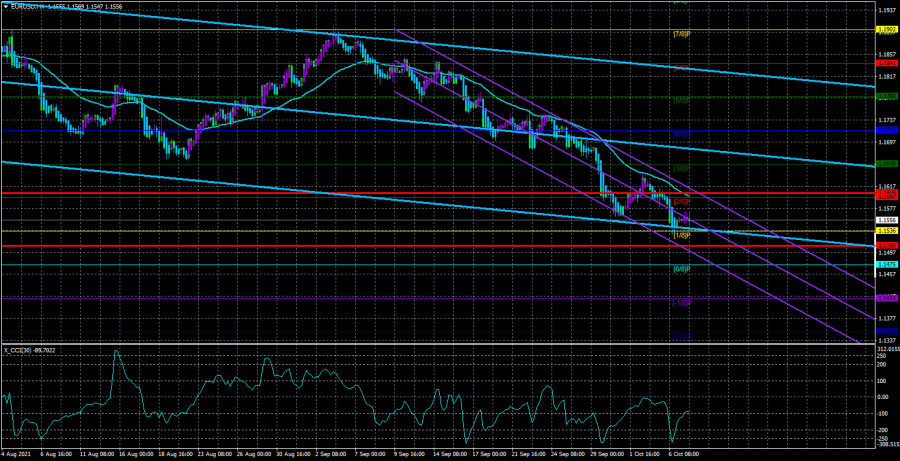 The EUR/USD currency pair in the middle of the trading week continues to be inside the downward trend, where it has been for more than a month. Thus, for the first three trading days of the week, the technical picture has not changed in any way, and the euro/dollar pair continues its downward movement. In our recent articles, we have repeatedly asked ourselves why the US currency continues to rise in price? When the country is on the verge of a "technical default," Republicans and Democrats once again cannot agree with each other and are playing political games, and the Fed has not yet reduced the volume of the QE program. It would be more logical to see the fall of the US currency. However, we also cannot ignore the opinions of other world-renowned experts. And some of them believe that the US dollar is growing now quite deservedly, and the whole world is on the verge of a new financial crisis. According to these experts, the situation with the US government debt is unprecedented: the national debt is so large that the slightest appreciation of the US currency, which has been growing for more than a month, can lead to an increase in interest on debts, corporate and state. If, in the government's case, this is just an additional burden on the budget and the Fed's printing press, then in the case of corporate debts, this will mean a very likely wave of bankruptcies. Also, China can "help" in the onset of a new financial crisis, which has serious problems with its real estate giant Evergrande, which may soon admit bankruptcy. Naturally, the bankruptcy of Evergrande may lead to another wave of bankruptcies since it will not be able to pay its obligations to other companies that also owe money to someone. In the modern world, many companies are so strongly tied to each other and tied to the financial system through loans that the fall of one of them into the abyss can pull dozens or even hundreds of other companies on strings.

Thus, some experts believe that a new financial crisis is a possible reality for the coming year. And what happens when instability begins and market participants begin to fear something? That's right. They are doing their best to protect themselves from possible losses. Therefore, as a safe-haven currency, the US dollar can be in demand now simply because many expect a new financial crisis.

However, many experts do not believe that the American economy may default in October. As we said earlier, Democrats can make an important decision without the help of Republicans since the number of their votes in the Senate is enough for this. Thus, now the bidding between Democrats and Republicans is simply continuing, where each side wants to get the most favorable conditions for themselves. However, in the end, just in the last 5 minutes (as was the case with Brexit last year), a fateful decision will be made.

Based on all this, we conclude that the many different topics available in the United States have practically no effect on the American currency. Recall that when the last round of dollar growth began (more than a month ago), it looked like a new and banal round of correction. However, the pair has already gone down almost 400 points, and so far, there is no reason to expect the completion of this movement. From a technical point of view, both linear regression channels are directed downwards, and the price continues to be located below the moving average line. Therefore, there is no single buy signal at the moment. The dollar continues to add 20-30 points a day. Markets ignore most of the macroeconomic statistics. The speeches of Jerome Powell, Christine Lagarde, and Janet Yellen last week did not affect the mood of traders in any way. Thus, the calm before the storm continues. 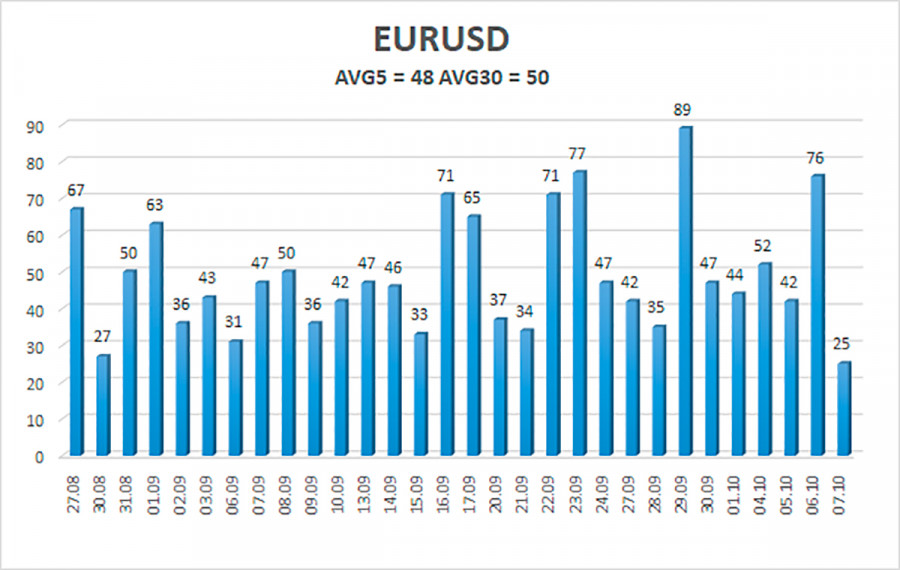 The volatility of the euro/dollar currency pair as of October 8 is 48 points and is characterized as "low." Thus, we expect the pair to move today between the levels of 1.1509 and 1.1605. The reversal of the Heiken Ashi indicator downwards signals the resumption of the downward movement.

The EUR/USD pair continues its downward movement. Thus, today, it is necessary to open new sell orders with targets of 1.1509 and 1.1475 in case the Heiken Ashi indicator is reversed. Purchases of the pair should be opened if the price is fixed above the moving average with targets of 1.1658 and 1.1719. They should be kept open until the Heiken Ashi indicator turns down.

Interesting? Write a comment below.
 Overview of the EUR/USD pair. October 8. Is the world on the verge of another financial crisis?
Forward 
Backward 