Overview of the GBP/USD pair. October 12. Are there few crises in the UK? Get another one! 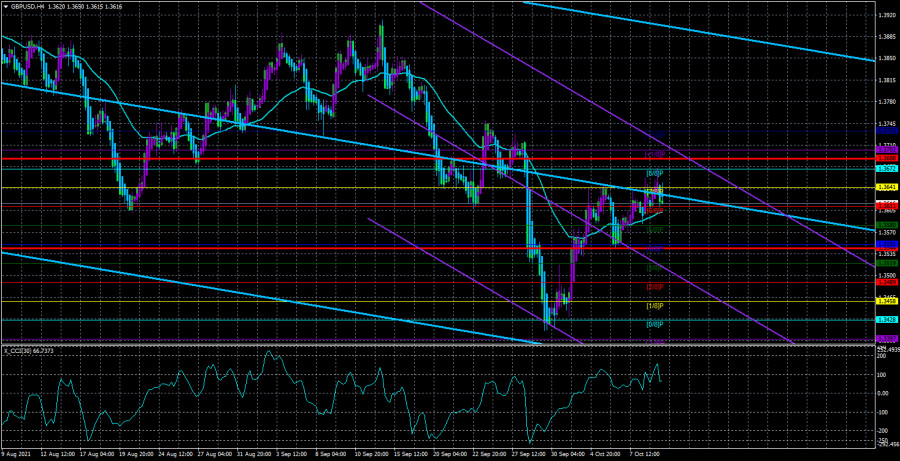 The GBP/USD currency pair did not show increased activity at the beginning of the new trading week. Recall that the price has spent the last few days above the moving average line, which may mean the continuation of the upward trend. However, the bulls still fail to gain a foothold above the Murray level "7/8" - 1.3641. Thus, further growth is not obvious. In our recent articles, we have already said that the fundamental background for the British currency is now very ambiguous. This ambiguity is expressed by a variety of important topics in the UK itself. The markets react selectively, and a somewhat incomprehensible situation with macroeconomic statistics in the United States, the lack of correlation with the euro/dollar pair, and incomprehension related to the Fed's QE program and the timing of its completion. As we have already said, it is now extremely difficult to understand why the pound is moving in one direction or another. On September 28, the British currency crashed down by 300 points, triggered by the "fuel crisis" in the UK. It was followed by a recovery of about the same 300 points, as the fuel situation improved. But what's next? The price is above the moving average but cannot overcome 1.3641, and both linear regression channels are directed downwards. From our point of view, the situation is as complicated as possible right now.

Meanwhile, the British media reported another crisis that grew out of the "logistics crisis." Although to put it more precisely, the "logistics crisis" is a crisis related to the transportation of goods and, accordingly, a shortage of truckers can be attributed to it. But the crisis related to the shortage of personnel to work in the service sector, on farms, at livestock enterprises is already a "personnel shortage." As we said earlier, the UK lost a huge number of migrant workers with Brexit, who were traveling to the country from the European Union and Eastern Europe. However, after Brexit, the rules for obtaining visas became more complicated. The rules for getting a job in the country became somewhat different. Many workers felt that they could earn the same money in other rich countries of the European Union. When the British authorities realized that the British themselves were not ready to work as waiters, movers, and raise pigs on farms, and deliver gasoline to gas stations, they urgently began offering temporary work visas to everyone. That's just the problem it didn't solve because now they still don't want to go to Britain because of the unclear status of staying in the UK.

Boris Johnson has already stated that the shortage of employees in many areas will lead to the fact that wages in these not the most popular professions will grow, which will lead to the country's getting rid of dependence on migrant workers. Britons will work in all areas of the economy. However, experts believe that the problem will not be solved in this way, and the growth of wages will increase prices for a huge number of goods and services. In the meantime, livestock farms have exhausted the free space for keeping animals that were supposed to go for meat, but due to a shortage of slaughterers, butchers, and drivers, meat processing plants are idle. Pubs and bars across the country are also reporting a shortage of waiters and other staff. The pound is not reacting too zealously to this news yet. 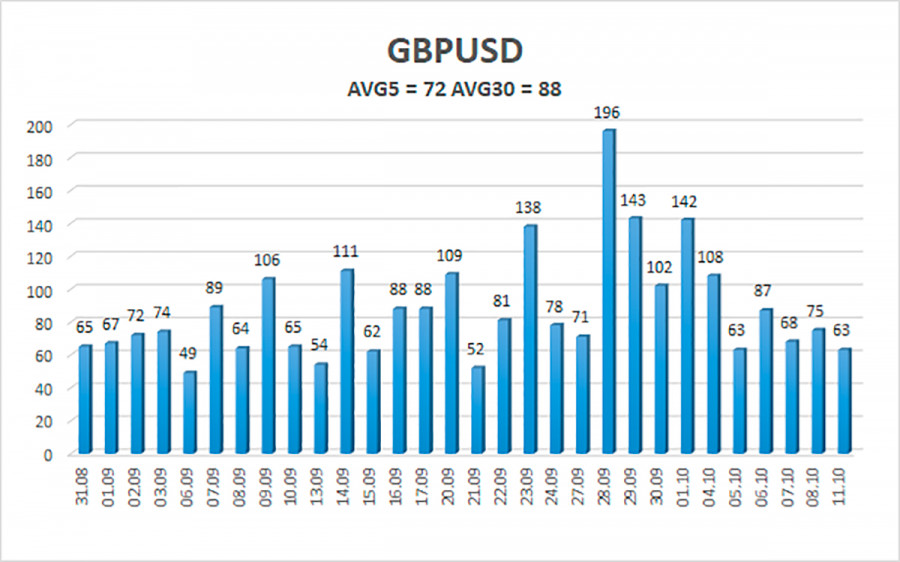 The average volatility of the GBP/USD pair is currently 72 points per day. For the pound/dollar pair, this value is "average." On Tuesday, October 12, we expect movement inside the channel, limited by the levels of 1.3544 and 1.3688. A reversal of the Heiken Ashi indicator upwards will signal a possible resumption of the upward movement. As can be seen in the illustration above, volatility decreases again after a small spike.

The GBP/USD pair continues to be located above the moving average on the 4-hour timeframe. Thus, at this time, it is necessary to consider options for long positions with targets of 1.3672 and 1.3688 levels in the event of a reversal of the Heiken Ashi indicator upwards or a rebound from the moving. Sell orders should be considered again if the price is fixed below the moving average line with targets of 1.3550 and 1.3544 and keep them open until the Heiken Ashi turns upwards.

Interesting? Write a comment below.
 Overview of the GBP/USD pair. October 12. Are there few crises in the UK? Get another one!
Forward 
Backward 