Overview of the GBP/USD pair. October 13. Great Britain: the revision of the "Northern Ireland protocol" 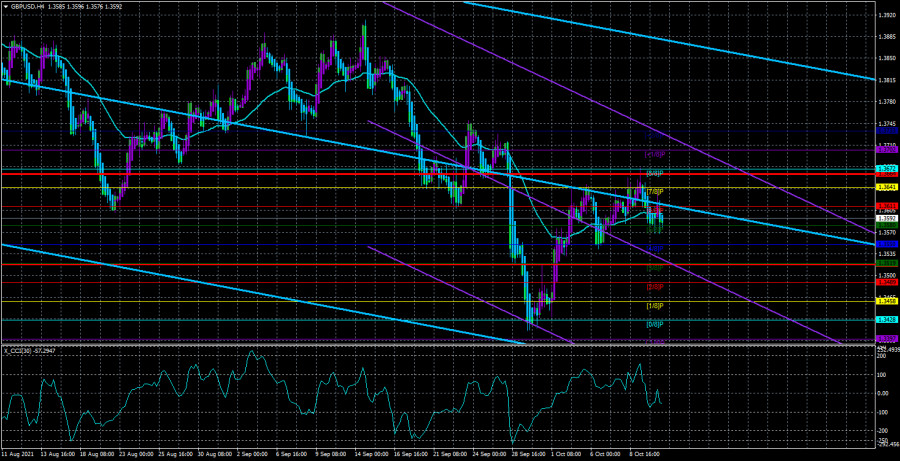 The GBP/USD currency pair at the beginning of a new trading week continues to amaze with its unwillingness to work out macroeconomic statistics, as well as multidirectional movements that often change for no reason. If you look at the illustration above, it becomes clear that market participants cannot decide on the direction of trading in the last few days. It was not possible to gain a foothold above the level of 1.3642, and it was also not possible to start a new downward trend. As a result, the quotes of the pound/dollar pair overcame the moving average line several times. However, both linear regression channels are still directed downwards. Thus, in the medium term, the downward trend persists. However, we recall that in the long term, the upward trend persists, and the current downward trend is nothing more than a correction against the global upward trend. Thus, from a purely technical point of view, the pound may well resume its upward movement to the level of 1.4240, which is an annual maximum. Recall also that in total, the pound has adjusted against the dollar by 30%, and the euro - by almost 50%. Thus, it is the pound that has a great chance of new growth. And the European currency now needs to come to its senses and at least "come to life" to begin with. However, the pound/dollar pair is now showing completely different volatility indicators that everyone is used to. The latest data shows that the average volatility over the last five days is about 70 points.

Meanwhile, passions are rekindling under the name "the battle for the Northern Ireland Protocol." For a long time, the UK and the European Union were participants in "Brexit." Now the second season of this series called "Life after Brexit" has been released. And the first problem appeared already in the first two months of this year when it became clear that the protocol on Northern Ireland, which is part of the bilateral agreement on Brexit, is not being implemented as intended. At the same time, this became clear only to London, which insisted for several months in a row on a complete revision of this protocol. At first, Boris Johnson unilaterally violated some points several times and now openly declares that the protocol needs to be revised. Otherwise, the UK will refuse to implement it on all controversial issues. "We will consider any proposals that come from the European Union. Our negotiators are ready to find a solution, and we expect that this work will begin soon. The reward will be a stronger relationship between the United Kingdom and the European Union. Cosmetic changes cannot be limited. If the EU does not wish to demonstrate its readiness to revise the protocol significantly, we will have to resort to Article 16 to guarantee the conditions for the preservation of the Belfast Agreement and the peace process in Northern Ireland," the British government said in an official statement.

It should be noted that Article 16, the so-called "backdoor," does exist. Without going into details, it allows the parties to the agreement to abandon some points of the transaction if "there is no other way" or "if there is a serious threat to one of the parties to the agreement." Roughly speaking, Article 16 can be interpreted as you like. The International Court of Justice will deal with these interpretations since Brussels still refuses to revise the agreement and is in no hurry with proposals to improve the protocol. European media report that Brussels is ready to make several concessions. However, at the same time, the general text of the protocol should remain approximately the same as it is now. The disputes concern Northern Ireland. This time London wants to completely exclude the influence of the European Court of Justice in any disputes related to "its territory." The European Union believes that Northern Ireland cannot remain part of the EU single market under such conditions. And if Northern Ireland ceases to be part of the single market, then a border should appear between it and Ireland to exclude the possibility of smuggling and illegal movement of goods between the UK and the European Union. In turn, the border on the island of Ireland will jeopardize the breakdown of the Belfast Agreement of 1998, which put an end to 30 years of bloody conflict on the island. 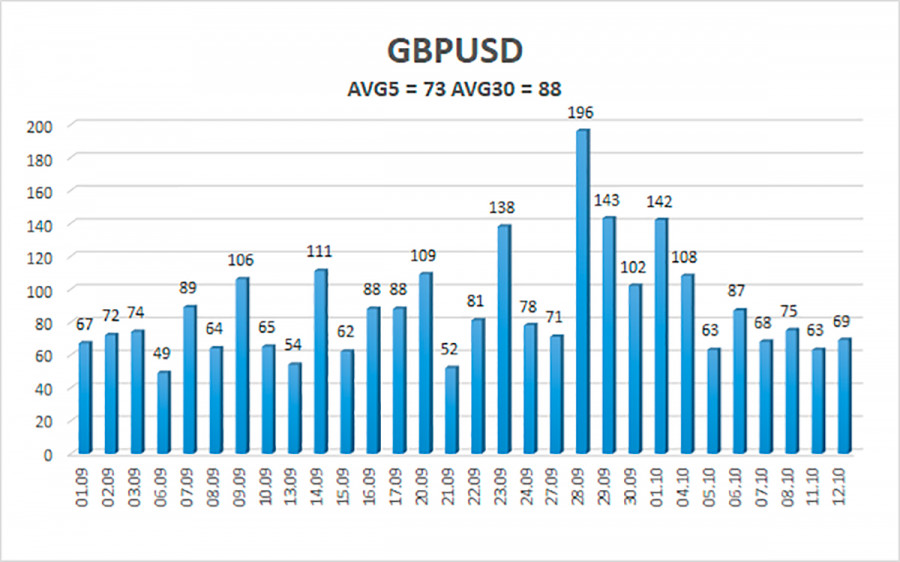 The average volatility of the GBP/USD pair is currently 73 points per day. For the pound/dollar pair, this value is "average." On Wednesday, October 13, we expect movement inside the channel, limited by the levels of 1.3518 and 1.3664. A reversal of the Heiken Ashi indicator upwards will signal a possible resumption of the upward movement. As can be seen in the illustration above, volatility continues to decline after a small spike.

The GBP/USD pair has consolidated below the moving average on the 4-hour timeframe. Thus, at this time, it is necessary to consider options for short positions with targets of 1.3550 and 1.3519 levels before the reversal of the Heiken Ashi indicator upwards. Buy orders should be considered again if the price is fixed above the moving average line with targets of 1.3641 and 1.3664 and keep them open until the Heiken Ashi turns down.