Overview of the GBP/USD pair. October 19. The British paradox: falling unemployment with a continuing shortage of labor. 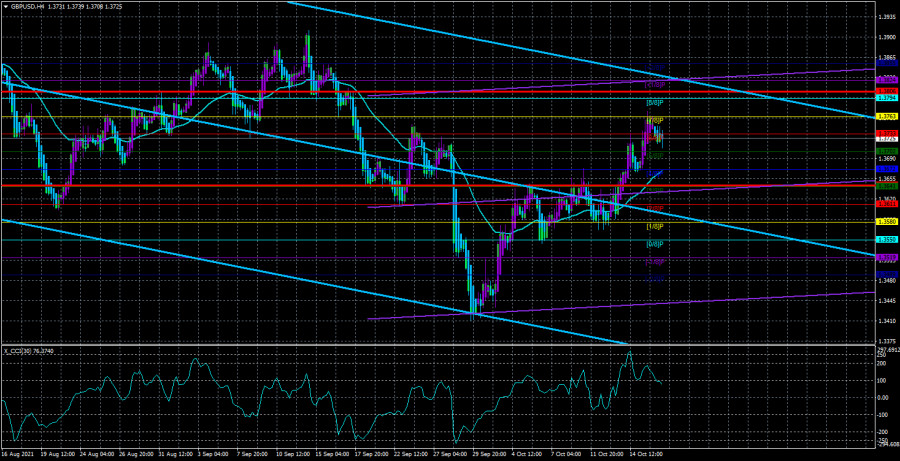 The GBP/USD currency pair during the first trading day of the week began a round of corrective movement against the upward trend that has formed in recent weeks. The lower linear regression channel has just begun to turn up. However, a new upward trend could already have been initiated. Recall that we have been expecting a new trend in the pound for a long time. In addition, we have repeatedly drawn traders' attention to the fact that the British currency has risen by 2,700 points over the past year and a half and has adjusted by only 30%. At the same time, the euro rose by 1800 points and adjusted by almost 50%. The pound is more willing to grow and more reluctant to fall.

Consequently, the pound was the most likely candidate for the resumption of the global upward trend. It may be the process we are observing right now. Although, from a fundamental point of view, it is now very difficult to explain both the movement of the euro/dollar pair and the movement of the pound/dollar pair. What does it mean? First, there is no correlation at this time between these two pairs. Second, it is very difficult to understand why the euro is getting cheaper now, and the pound is growing if it is in the UK that a "logistical crisis" has formed, threatening to affect all spheres of British life. Also, the nature of the movement of both major currency pairs is different now. If the pound is still moving more or less actively, then the euro "pleases" traders with movements of 30-40 points per day, most of which are flat.

We are returning to the UK. If you look exclusively at the "foundation," it is very difficult to find the reasons for the pound's growth by 2,700 points over the past year. Because in 2020, the probability of a Brexit agreement between Britain and the EU was negligible, which promised huge losses for the UK. Nevertheless, the pound felt just fine, which led us to conclude about more global factors that support it (more precisely, create pressure on the dollar). Now there may be approximately the same story. We have already said that the factor of pouring hundreds of billions of dollars into the American economy has not gone away. But in Britain, the economy is again on the verge of a new crisis, although the pace of its recovery is not as strong as in the United States. Of course, the logistical crisis is not the biggest problem of the British, who may lose Scotland in the coming years, and are also sitting on a powder keg, which is located on the island of Ireland.

Nevertheless, as practice shows, the shortage of employees has already spread to the entire medium-sized business. And this is although the official unemployment rate in the country is declining. The shortage of personnel is noted among drivers, waiters, farmworkers, builders, and other not the most popular professions. It turns out that too many migrant workers left Britain, and now there is no one to work in these positions. And at the same time, the British themselves are returning to work as the unemployment rate continues to decline. But the shortage of labor in the most unattractive professions does not go away since the British do not want to work as drivers and movers. And how to solve this problem, if Boris Johnson is now betting on his population without mass involvement of migrant workers, is unclear. The Prime Minister himself has already stated that only an increase in wages in scarce professions can solve the shortage of personnel. Therefore, we are waiting for a new price increase, inflation, increase in the cost of gas and electricity, constant conflicts with the European Union, and the uncertainty with the "Northern Ireland protocol." 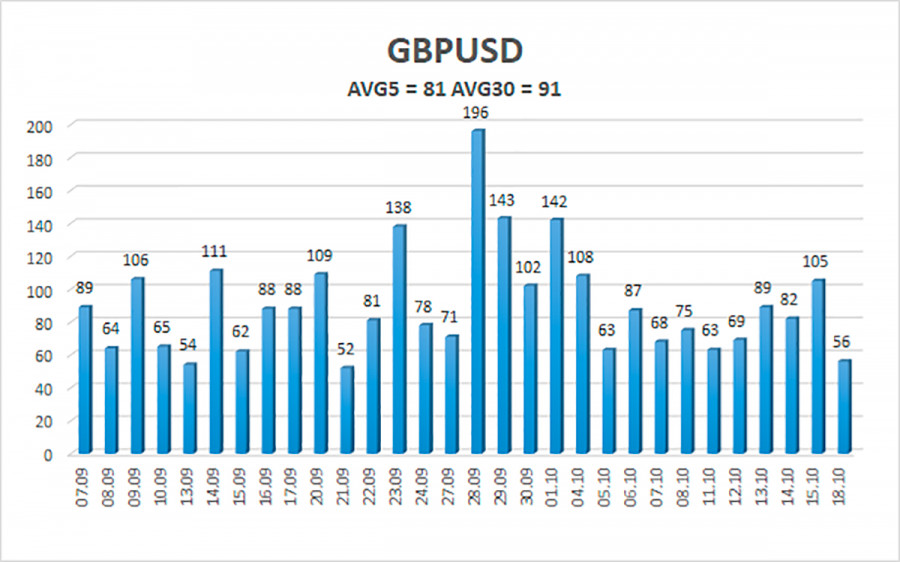 The average volatility of the GBP/USD pair is currently 81 points per day. For the pound/dollar pair, this value is "average." On Tuesday, October 19, we expect movement inside the channel, limited by the levels of 1.3642 and 1.3806. The upward reversal of the Heiken Ashi indicator signals the resumption of the upward movement.

The GBP/USD pair started a weak correction on the 4-hour timeframe. Thus, at this time, new long positions with targets of 1.3763 and 1.3794 levels should be considered after the Heiken Ashi indicator turns up. Sell orders can be considered again if the price is fixed below the moving average line with targets of 1.3641 and 1.3611 and keep them open until the Heiken Ashi turns up.