Overview of the GBP/USD pair. October 20. The US dollar is falling on all fronts. In the UK, they are preparing to raise 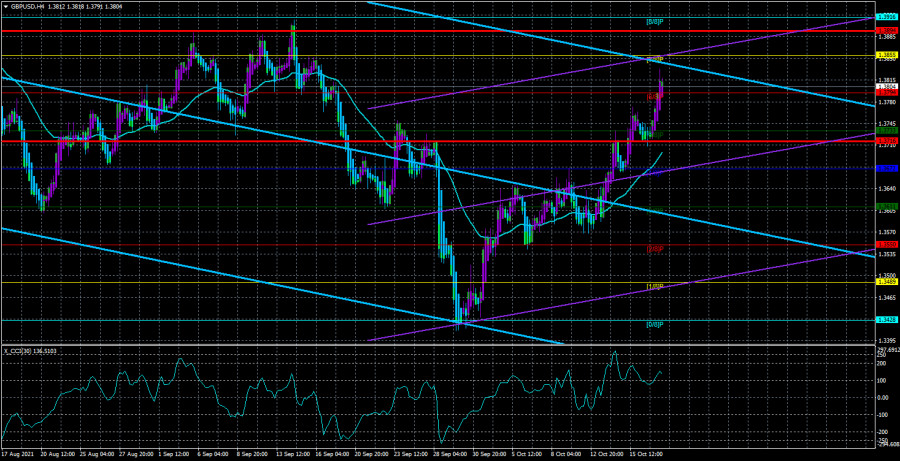 During the second trading day of the week, we can say that the GBP/USD currency pair pleased market participants. The upward movement resumed at night, and by the middle of the day, the pound had gained about 100 points. One hundred points are already something to talk about. At least with such volatility, it is possible and necessary to trade a pair. But there were no grounds for such a movement, as in the case of the euro/dollar pair. As we have already said, the pound's growth began at night, and the first more or less important event on Tuesday was scheduled for lunchtime - a speech by the Chairman of the Bank of England, Andrew Bailey. However, even an event with such a loud sign did not initially bring traders into euphoria since there were already 20 or 30 such speeches by Bailey, Lagarde, and Powell over the past month. In principle, they all had the same theses:

1) inflation is rising, but this is a temporary phenomenon;

2) if inflation continues to rise, the central bank will intervene in the situation.

3) the grounds for reducing QE have either already been achieved or will be achieved in the near future.

4) key rates will increase next year unless something unforeseen happens.

Except for minor differences, the rhetoric of the BA, the ECB, and the Fed is now almost identical. Thus, with all the desire, Andrew Bailey's speech could not provoke such a strong growth of the British currency. However, in general, the pound has been growing for several weeks and, if we turn to fundamental analysis, it will be very difficult to explain this growth. Of course, there are always global factors that can continue to put pressure on the US dollar. If we assume that a slightly stronger downward movement in both the euro and the pound was in some way an unplanned accident, then at this time, there is a high probability of a resumption of the global upward trend for both pairs. It is especially evident on the 24-hour timeframe and above. Also, the pound/dollar pair can overcome the Ichimoku cloud on the 24-hour TF today, and this will be a very strong signal for further growth of the British currency. On the other hand, a rebound from this important line, which currently lies at the level of 1.3777, may provoke a new strengthening of the US currency. In general, we want to say that at this time, everything depends more on technical signals and the picture and not on the "foundation," which remains ambiguous.

Andrew Bailey, by the way, has already given a speech this weekend. Then the head of the Bank of England noted that inflation in the UK continues to accelerate, but this is because energy prices have increased significantly recently. Andrew Bailey noted that monetary policy could not solve the issue of the rising cost of gas or oil, but it must solve issues related to increased inflationary pressure. According to the head of the BA, now the regulator sees a danger to medium-term inflation expectations, so it will probably have to intervene. According to experts, inflation may exceed 4% by the end of the year. However, how exactly can the Bank of England intervene in what is happening?

Given that the quantitative stimulus program continues to operate in Britain, it is unlikely that BA will start raising the key rate without first completing it. And this means that all Bailey's hints about raising the key rate have no real basis. If Mr. Bailey meant that rates would be raised next year, then there is nothing surprising in this at all because the markets are waiting for this development of events. Thus, there is only one question now in the ECB, the Fed, and the BA: when will the QE program begin to be curtailed. The beginning of this process will be the start of the process of tightening monetary policy, which implies an increase in rates. 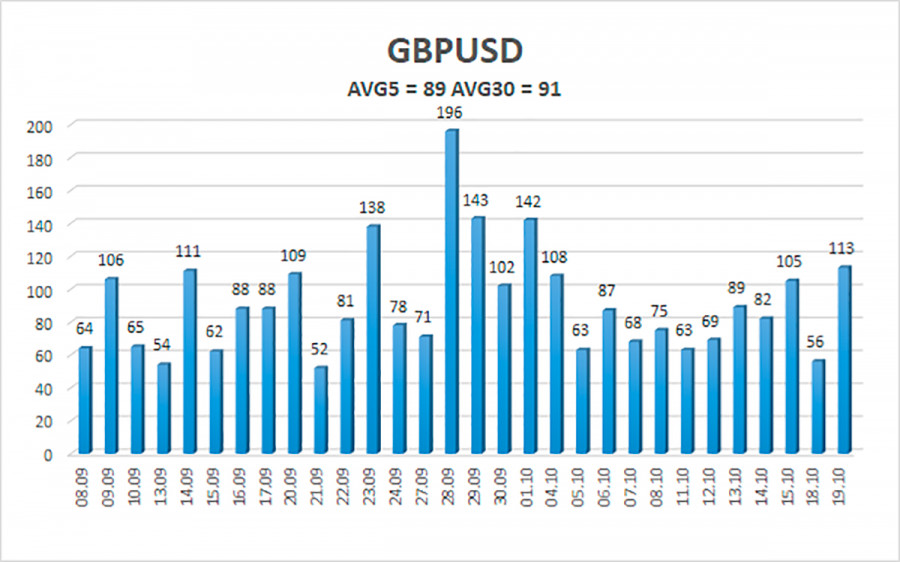 The average volatility of the GBP/USD pair is currently 89 points per day. For the pound/dollar pair, this value is "average." On Wednesday, October 20, we expect movement inside the channel, limited by the levels of 1.3716 and 1.3894. The reversal of the Heiken Ashi indicator downwards signals a new round of corrective movement.

The GBP/USD pair resumed its upward movement on the 4-hour timeframe. Thus, at this time, it is necessary to remain in long positions with the targets of 1.3855 and 1.3894 levels until the Heiken Ashi indicator turns down. Sell orders can be considered again if the price is fixed below the moving average line with targets of 1.3672 and 1.3611 and keep them open until the Heiken Ashi turns up.

Interesting? Write a comment below.
 Overview of the GBP/USD pair. October 20. The US dollar is falling on all fronts. In the UK, they are preparing to raise
Forward 
Backward 