Overview of the GBP/USD pair. October 22. The evidence of the statements of the Fed representatives is amazing. 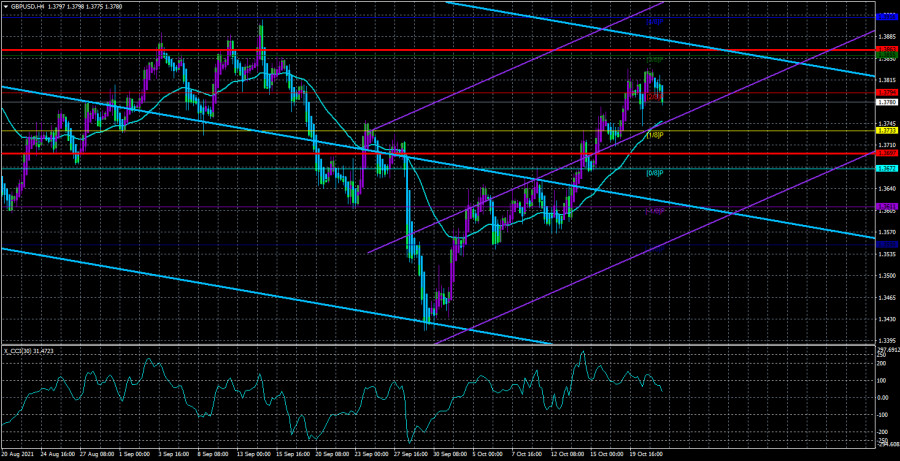 The GBP/USD currency pair continued its upward movement during the fourth trading day of the week. However, in the afternoon, it began a new round of correction. In general, the British pound continues to grow in pair with the US currency, while the European currency remains in one place. We have already said earlier that there is a correlation between the main pairs, which is alarming. There seem to be no special fundamental and macroeconomic reasons for the British currency to become more expensive now. The market has already worked out the last important event (the "fuel crisis"), and no new important topics have recently arisen in the UK. In recent weeks, there has been an increase in coronavirus cases in Britain again, but at the same time, the pound is growing. Thus, it cannot be concluded that the markets are very worried about this.

Moreover, in the United States, the number of daily recorded disease cases remains reasonably high. Thus, our assumption remains that the markets are simply tired of waiting for the Fed to make concrete statements regarding the curtailment of the QE program and making an appropriate decision. However, this assumption does not explain that the European currency is not much more expensive than the US dollar. Thus, at this time, we propose to pay more attention to technical analysis since fundamental analysis does not provide answers to all the questions that are currently available.

Nevertheless, we also cannot ignore the fundamental events that still take place. For example, Loretta Meister, a member of the Fed Board and chairman of the Federal Reserve Bank of Cleveland, made a speech yesterday. The main theses voiced by her are as follows.

1) The Fed should start curtailing its quantitative easing program in the near future.

2) The Fed is not going to raise the key rate in the near future.

3) The "coronavirus" and its consequences had the greatest impact on high inflation.

4) When the Fed begins to reduce the quantitative stimulus program, it will have enough time to assess and reassess the situation with inflation and the recovery of the labor market.

6) Next year, inflation should start to slow down.

7) The Fed assumes that inflation will decrease, but there are risks in which it will remain at a high level, and the Fed will have to intervene.

8) The conditions that are necessary for the curtailment of QE have been achieved.

9) US GDP in the third quarter may be lower than expected.

Thus, Loretta Meister gave detailed answers to many important questions. But most of these answers have long been known to traders and investors. And for a certain part of the questions, the answers suggested themselves. For example, this is the case with inflation. It has been clear for a long time that inflation can and most likely will continue to accelerate. The fact that the Fed will not raise the key rate in the coming months is also understandable. Thus, it seems to be important information, but there was no reaction to it.

Consequently, the pound will continue to move according to "its own rules." Therefore, we recommend paying more attention now to technical analysis and signals. So far, a short-term upward trend remains, as the price continues to be located above the moving average line, and the lower channel of linear regression is directed upwards. Therefore, before the quotes are fixed below the moving average, purchases of the pound/dollar pair should be considered. 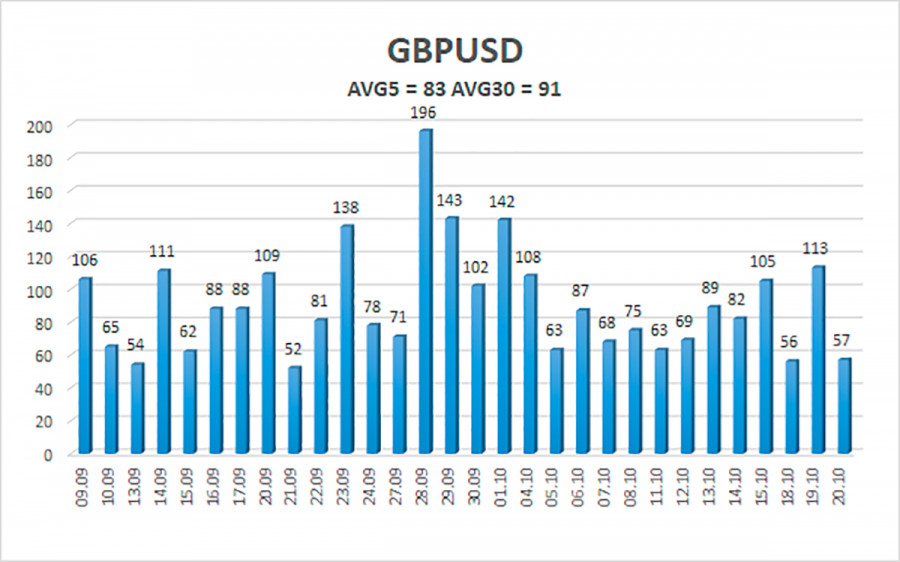 The average volatility of the GBP/USD pair is currently 83 points per day. For the pound/dollar pair, this value is "average." On Friday, October 22, we expect movement inside the channel, limited by the levels of 1.3697 and 1.3863. The upward reversal of the Heiken Ashi indicator will signal the resumption of the upward movement.

The GBP/USD pair has started a new round of correction on the 4-hour timeframe. Thus, at this time, new long positions with targets of 1.3855 and 1.3863 levels should be considered in the event of a reversal of the Heiken Ashi indicator upwards. Sell orders can be considered again if the price is fixed below the moving average line with targets of 1.3697 and 1.3672 and keep them open until the Heiken Ashi turns up.

Interesting? Write a comment below.
 Overview of the GBP/USD pair. October 22. The evidence of the statements of the Fed representatives is amazing.
Forward 
Backward 