Overview of the GBP/USD pair. October 25. The British are no longer happy with Brexit. Negotiations on the "Northern Ireland 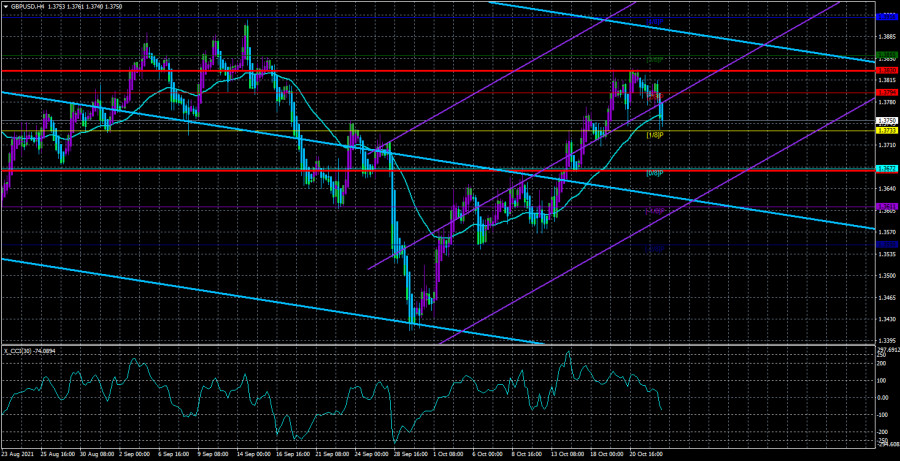 The GBP/USD currency pair began to adjust during the last trading day of last week and even consolidated below the moving average line. Therefore, after several weeks of growth of the British currency, there comes a period when the dollar may rise slightly. Recall that the technical pictures for the euro/dollar and pound/dollar pairs on 4-hour timeframes are now completely different. In general, in a more global sense, everything remains as it was before. Namely, both pairs are being adjusted against the global upward trends observed in the last year and a half.

Nevertheless, the pound found the strength to grow by 400 points, while the euro did not. However, it should be noted that the pound passed most of the way down when the UK was "covered" by the "fuel crisis." Then the situation stabilized a bit, which could have caused the strengthening of the British currency. Nevertheless, no one can deny that the pound is cheaper, much less willingly against the dollar than the euro.

Meanwhile, the issue of the "Northern Ireland Protocol" continues to be on the agenda. Recall that this protocol is part of the Brexit agreement, which was signed at the end of last year by the UK and the EU. However, almost from the very beginning of this year, London announced its desire to revise this protocol since, in its opinion, it failed in practice and is ineffective. However, most likely, it is ineffective only for Britain. And, since the agreement is bilateral, it requires the consent of both parties to revise it. But there is no agreement from the European Union yet.

Moreover, Brussels threatens legal proceedings and sanctions against London if Boris Johnson changes certain protocol points unilaterally. Boris Johnson himself threatens to enact Article 16, which allows "in a force majeure event if the protocol threatens serious damage to one of the parties" not to comply with certain points of it. It should be noted that such a "backdoor" exists in many agreements and, as a rule, has a rather vague interpretation. The parties seem to leave themselves escape routes if something does not go according to their plan. At the same time, the court will then need to prove that the grounds for refusing to fulfill the obligations related to the contract were sufficient. Negotiations on the "Northern Ireland protocol" should resume in the near future, but how they will end is a big question.

At the same time, an adult poll was conducted in the UK, which showed that the majority of Britons are no longer satisfied with how life is going after Brexit. 53% of Britons said that "Brexit is going badly," which is 15% more than the number who gave a similar answer in June. It should also be noted that 32% of respondents call the current situation "very bad," and the number of those who said that Brexit is going well enough has decreased in a few months from 25% to 18%. Thus, most Britons are inclined to believe that it was better in the European Union than it is now, which may negatively affect the political ratings of Boris Johnson and the entire Conservative Party. Recall that the elections are just around the corner, and the Labor Party is just waiting for a chance to win back some seats in Parliament from the Conservatives, who inflicted a serious defeat on them in 2019 when their leader was still Jeremy Corbyn.

Moreover, Corbyn's latest proposals were to hold another referendum to check whether the British wanted to leave the EU and whether the country should change its decision. In general, if the government changes in Britain in the next couple of years, then many issues may appear in a completely different form. For example, it is completely unclear what position the Labor government can take about Scotland, which believes that its rights are being infringed. Its opinion is not taken into account. Edinburgh ardently wants to leave the Kingdom and return to the European Union. And next year, there may be a referendum on independence from Britain. If the supporters of separation win this referendum, it will be another major blow to Britain, which will lose a third of its territory and about 6 million citizens. What will happen to the pound then? It's scary even to imagine. 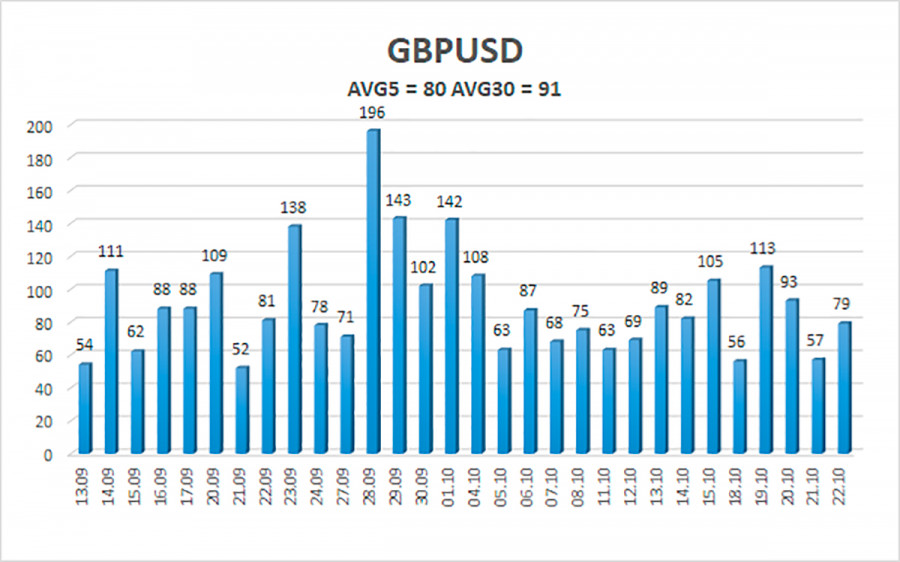 The average volatility of the GBP/USD pair is currently 80 points per day. For the pound/dollar pair, this value is "average." On Monday, October 25, we expect movement inside the channel, limited by the levels of 1.3670 and 1.3830. A reversal of the Heiken Ashi indicator upwards will signal a possible resumption of the upward movement.

The GBP/USD pair has started a new round of correction on the 4-hour timeframe. Thus, at this time, new long positions should be considered with the targets of 1.3794 and 1.3830 levels in the event of a price rebound from the moving average, the overcoming of which is not yet deep. Sell orders can be considered again in the case of a more confident consolidation of the price below the moving average line with a target of 1.3672 and keep them open until the Heiken Ashi turns up.

Interesting? Write a comment below.
 Overview of the GBP/USD pair. October 25. The British are no longer happy with Brexit. Negotiations on the "Northern Ireland
Forward 
Backward 