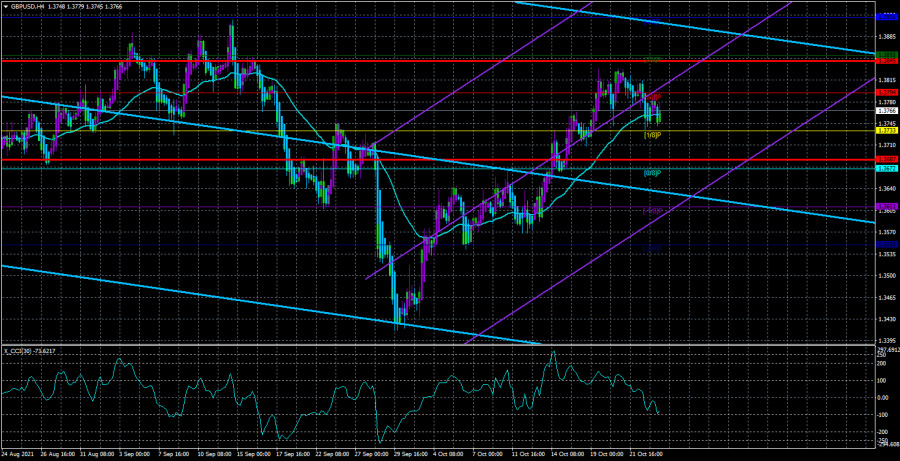 The GBP/USD currency pair continued to adjust during the first trading day of the current week, but at the same time, it moved again completely, unlike the EUR/USD pair. The decline in the quotes of the British currency happened the same way as the decline of the euro. However, at the same time, the euro fell much stronger than the pound, although it should be the opposite. Thus, the British pound is still trading close to the moving average line, and it is impossible to make an unambiguous conclusion about overcoming it yet. Consequently, it is the British pound that retains a high probability of resuming growth. What else can you say about the technical picture? In principle, all the movements of the pound in the last month and a half have been quite strange.

On the one hand, the "fuel crisis" played out in the UK, and therefore the pound collapsed down and then recovered when the worst was over. On the other hand, the "fuel crisis" is part of a much larger "logistical crisis," which may take months to overcome. Britain faced it at the beginning of this year and still can't do anything about it. Therefore, the latest growth of the pound looks quite strange. It was especially because against the global upward trend; the pound adjusted much weaker than the same European currency. The conclusion remains: the pound is much less willing to give way to the dollar and is much more willing to grow against it. Although if we consider the behavior of large traders (COT reports), it looks as if professional players themselves do not know what to do with the British currency now.

Meanwhile, US Treasury Secretary Janet Yellen admitted that the current level of consumer prices is very high, but at the same time, control over it is not lost. According to Yellen, inflation will decrease by the second half of 2022. As it is easy to guess, Yellen associates the decline in inflation with the completion of the QE program, which should be reduced to zero in the middle of next year. Janet Yellen also noted that the coronavirus pandemic and problems with supply chains worldwide provoked high inflation. Former US Treasury Secretary Lawrence Summers also asked Yellen whether inflation was getting out of control. Yellen replied that the former head of the Treasury is probably mistaken. "I agree that we are going through a period of higher inflation than the one that Americans have seen for a long time before, and this causes them concern and anxiety, but we have not lost control," Yellen said.

Thus, as we can see, the issue of inflation in the United States is very acute now. It worries not only investors who continue to direct cash flows to the stock and cryptocurrency markets in an attempt to hedge but also ordinary Americans, for whom prices for everything are also rising. It can also be assumed that inflation may not just remain high but continue to accelerate in the next two months. It is supported by the "energy crisis," rising energy prices, as well as new outbreaks of COVID around the world, although many developed countries have already vaccinated most of their population. However, the same UK remains in second place globally in terms of the number of new cases of the disease. And this is the country that was in the first place in terms of vaccination rates. However, more than a million Britons have been infected in the last 28 days. Thus, vaccines against the "coronavirus" strengthen people's immunity, but they do not guarantee that they will not get infected. And if so, then at the moment, the world has not defeated the "coronavirus." Moreover, every few months, there is a new message that a new strain has appeared, which is more contagious, dangerous, and resistant than the previous ones. Consequently, the world may face a crisis more than once, epidemiological and economical. 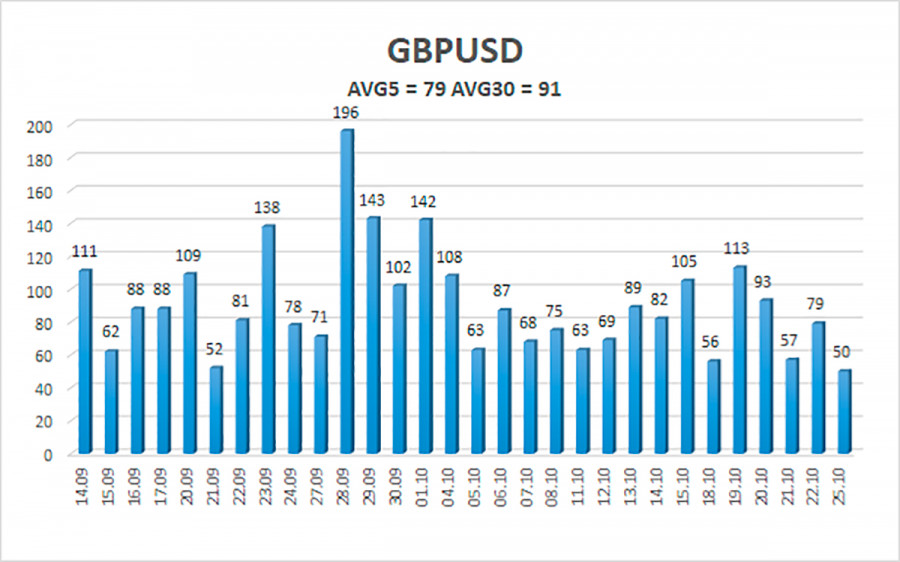 The average volatility of the GBP/USD pair is currently 79 points per day. For the pound/dollar pair, this value is "average." On Tuesday, October 26, we expect movement inside the channel, limited by the levels of 1.3687 and 1.3845. A reversal of the Heiken Ashi indicator upwards will signal a possible resumption of the upward movement.